Dorrith describes coming to Scotland in 1939, settling in with a family in Edinburgh and being an evacuee in Innerleithen near Peebles.

INT: And you came to Scotland when?

D.S: I arrived in England on the 26th of July 1939. My parents had managed to get guardians for me and they met me at Liverpool Street Station. And there, you know, my guardian’s brother came too, because he spoke German and we went in the car. I think we must have stopped in Birmingham and then, we would get to Scotland about the 27th I should think.

INT: So they were Scots people?

D.S: They were Scottish yes.

D.S: Not Jewish, but they were Scottish.

INT: And, how did your parents find them?

D.S: Well, this is another thing that my foster sister told me, Rosalind, told me. I call her Auntie Rosi because it’s easier. She said that they had been invited to a cocktail party run by a Doctor Turk and she spoke to them about taking a child from Germany. I didn’t know about that, but, that’s what Rosalind told me.

D.S: It was chance. But my grandfather, Opa, was a Doctor and maybe he knew of Doctor Turk. Trudy Black went there every Friday night to Doctor Turk’s but I didn’t know anybody else knew her. But seemingly, Doctor Turk had, some of the refugees on a Friday night

INT: And was she a Jewish lady then?

INT: I see and where did you stay?

D.S: Well, to begin with I stayed in Stevenson Terrace Edinburgh. The district was Balgreen. I stayed there to begin with. But it was a small flat, an upstairs flat and not much room. Then just after the war had begun, my Aunt Alice suddenly turned up on their doorstep together with all her cases and they took her in.

INT: And she’d also come from Germany had she?

D.S: Yes she’d come from Frankfurt and do you know they kept her until she went to America about January or February 1940. They kept her all that time which was wonderful of them.

INT: They seem to be very nice people. Were they religious?

INT: They just did it out of the goodness of their heart?

INT: So, had you always been very conscious then, even though you didn’t mix with refugees, of where you came from?

D.S Oh yes, and I mean it wasn’t that I didn’t want to mix with them I just never met any. Well Daddy Gallimore had a friend called Harry Ahrem and he had come from Poland. He had TB; I think he must have been Jewish. And I think he’d been badly beaten up as well. He used to come and visit sometimes. But if people spoke with a funny accent I would follow them down the street.

INT: Do you still remember your German, Dorrith?

D.S: No. I go to German classes and I’m terrible at it. The only thing I’m really good at is my pronunciation – it’s perfect!

INT: It must lie deeply, deep in your head then, your pronunciation. 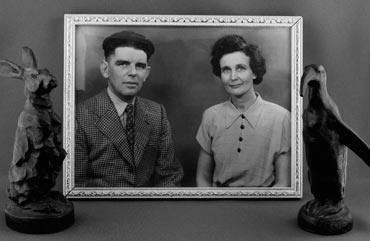