Edith describes her journey to Britain and arriving in London. She then talks about arriving in Scotland and meeting the gentleman and lady who soon became her beloved Mum and Dad.

INT: So how did you come to Scotland then? How did that happen?

EF: Well, when we arrived…I’d never been on a boat before but when we arrived, oh my, they took us to a great big hall in London and would you believe it they had white tablecloths, white, and they served us drinking chocolate and sandwiches and biscuits and cakes. And I was shaking so much that I spilt my cocoa, drinking chocolate, and it made a lovely brown river down this thing and that was the first time I ever shed a tear from when I left Germany.

INT: Was that because you were advised not to cry? Some people have told us that they were told it was dangerous, or Kinder were told it dangerous to cry.

EF: Dangerous to try what?

EF: No, nobody ever said that to me. Uh-huh, no. So then we all had labels of course so then after we’d eaten they said… you know we were in different groups.

INT: So they pointed to different areas?

EF: Uh huh, that’s right. And then they put us on a bus and we sat up all night on this train… no idea were I was going but then I had no idea on the first train where I was going, or on the ship. And on the ship, I had…I was with a girl much older than me and she made me go up on the top, you know. No, other way round; I was at the bottom and she was at the top.

EF: On a bunk each. And she was very, very sick during the night. So I had to look after her and she just had to stagger into my bunk.

EF: You know, and I had to climb up on top of this one but she kept being sick so neither of us had much sleep so that was a nightmare, and yes, that was coming over. And then when we were on the train we were of course on our way to Scotland and again I had no idea what was happening so when we got off they took a photograph, which I think you’ve seen? Bob’s [McKenzie] on that photograph, and his sister, at the very end. And they just put us on a bus again and they took us to an orphanage in Selkirk, which is now a hotel.

I’ve been back there. I was invited as an honoured guest at their Ridings – you know, the annual event, many years ago. And they took us there and it was a, och at that time, it was a dismal place, you know, and we were in a long dormitory, one for the boys, one for the girls, and I was at the very end one and because there were mice running around the floor, when somebody wanted to go to the toilet they’d say, “Edith, komm doch mit!, komm doch mit!” [Come with me] And of course, poor me, I had to get up and go to the toilet with them for company. Oh dear…

INT: To scare off the mice?

INT: Oh dear that’s terrible. Were there a lot of children there with you at that time?

EF: Difficult to tell, probably maybe about thirty of us, difficult to assess really. But there were a lot of older ones, there weren’t so many…I was the youngest one actually so…yeah. But that was something. And we got porridge every morning and it was runny…oh no…So that was a nightmare too. I didn’t like porridge.

EF: No, not a word – kein einziges Wort, (not a single word) Nothing. And now the funny thing is whenever I think of anything or if I’m caught in a traffic jam or anything, Helen always declares I speak in German, “Du liebe Zeit!”[Dear me!] “Was ist das?” [What is that?]“Was ist los? [What’s the matter?]” You know, things like that so…crazy.

So I had not a word of English, not a word, and we were sitting one day, having a meal actually, and they said “Edith” and I went. I was taken into one of the lounges and a lady and gentleman got up and she was dressed in powder blue dress and matching coat, tweed, and he had plus fours in chocolate brown and he had very brown eyes, you know. And they couldn’t speak a word of German; I couldn’t speak a word of English, but somehow I felt I could trust these people. For the first time since I had left my home and my parents I could trust them. And we smiled at each other and there was nothing else but all the paperwork was to be done then and they were going to come and collect me. Well that wasn’t discussed with me, but other ladies came as well, elderly ladies, two elderly ladies came to interview me and look me over and, I didn’t react one way or the other, not at all.

So anyway, when it came to the bit, Mum and Dad came to collect me and they said, “I’m very sorry. She’s been promised to the ladies – Naimes.” “Oh no. No, no” My father said. “That is not on because we’ve signed all the papers and we are definitely getting Edith.” “Well,” she said, the matron said, “I’m so sorry but you won’t get her today. We’ll have to look into this.” And they did look into it and in the end, of course Dad being a very determined person and a legal person, he knew all the tricks of the trade and so on… One day it was arranged that I would have my case packed and we got on the train. That was when there was still a connection between The Borders and Edinburgh and when we got to Edinburgh and got off the train, who were coming along the platform but Mum and Dad.

And they took me on another train and we went to Sinclairtown, which is another district in Kirkcaldy. The station is no longer there, and we got off there. And long stairs up and just a short walk and we came to the bank where Dad was in charge, a bank manager. And bank house on top, and brand new, a flat, and just when we went in, suddenly whoosh! And down the stairs came the most beautiful white and brown cocker spaniel and that was my friend forever, licked me all over and we have been inseparable until he died. So he didn’t die until he was fifteen…I’m maybe adding things that are irrelevant?

INT: No, no, no, not at all. So I suppose that gave you a very good impression of Scotland when you first came?

Links to Other Testimonies by Edith Forrester 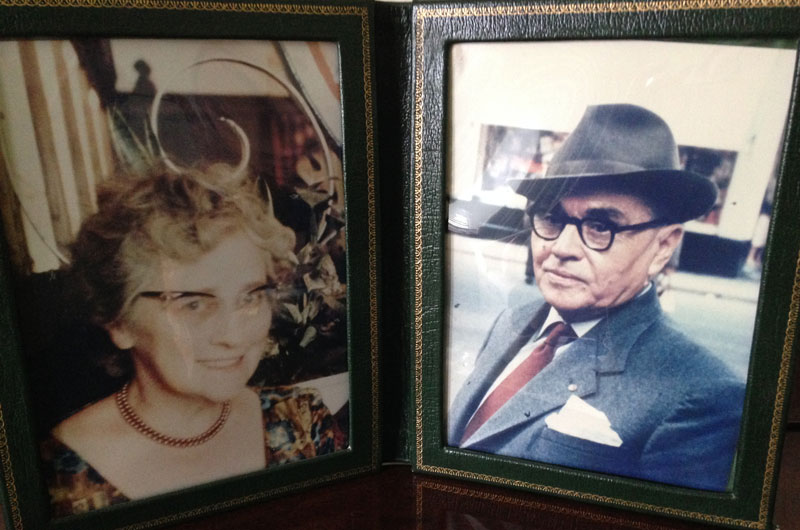