Edith describes her family background and how she felt when her mother told her she was leaving Germany. She explains that she was too young to realise that her parents were not coming with her. She tells the interviewer about the Gestapo’s visit to her home. She then speaks about the fate of her Jewish mother and her Christian father.

INT: Edith, could you begin by telling me when you were born?

EF: Yes I was born in Nordhausen in Harz, in Germany.

INT: And in what year was that?

INT: And what was your name at birth?

INT: Now can you tell us a little about your family life before you came here?

EF: Yes. I had been going to a school, a non-Jewish school, and I had a little girlfriend called Gretchen. We used to go to school together and whenever she discovered I was Jewish she stopped coming for me. That was a heartbreak for me but I had a wonderful teacher called Herr Krieghof and I can remember very vividly my mother saying that we were going away. I thought, ‘Oh good, a holiday!’ So we went shopping, I think in Hamburg, and visited friends and then one day my mother took me up to school to see Herr Krieghof and she was telling him that I would be going away, but I didn’t hear, just that I was just going myself, in my mind we were going as a family. And to my amazement I saw tears in Herr Krieghof’s eyes and I’d never seen a teacher with tears in his eyes and then he bent down and gave me a hug.

And I was so overcome by this and I thought, ‘Why did he do that?’ You know? So these moments have come back to me again and again because I was happy at school and I played with other children and…But I can remember when the name-calling started because they started calling, ‘Jüdin!’ ‘Jüdin!’ when they discovered at school. And of course I asked what that meant, you know, and so on and my mother just said, ‘Oh don’t worry about that. That’s not anything to hurt you or anything.’ But I also remember very clearly each morning at school we had to stand in lines in the playground and of course the German flag was raised and then at the end we had to say, ‘Sieg Heil, Sieg Heil!’ and put your hand out and I felt just cold shivers going down my spine because, you know, we had many, many Jewish friends that came in to the house and they were all so demonstrative and loving and everything.

And I can remember my mother was making felt flowers and she had a whole group of ladies who came to do this but what I didn’t know at the time was they were really learning English together and in case the Gestapo came, they were making flowers and when I arrived I had one of these felt flowers in my coat and…yes, the Gestapo eventually came. And first of all they went upstairs to the top flat, took away the Jewish owner and he was never heard again, of again. And then the next flat it was all Jewish people and they were taken away, as well, and then they came to me and I can remember it was night time, seemed to me in the middle of the night, but one of them was very rough and my grandmother was in the next room.

I had a bed with the maid, Annalise, and they pulled my grandmother out of bed and she was actually known to be at that time dying of cancer and she was standing in a white nightdress with her hands clasped and praying, you know, and that has never, ever left me because I adored my grandmother. My father had his own business and my mother was in charge of the office so it was really, Annalise, the maid, and my Omi [grandmother] who were important to me. So whenever I came home from Kindergarten and school it was always Omi I ran to or Annalise and… you know. So…

INT: And did they take your grandmother away or…?

EF: No, no, they took my father away. But my father, being non-Jewish, he of course was able to come back two or three days later and, you know, we were relieved at that. But by this time, names were being sewn on things, my little nametags and everything on what I was going to take with me and it was just … preparing for a journey.

INT: And were you aware that you were Jewish before any of this happened? No?

EF: No, no. These were lovely Jewish people that came and I loved them but being Jewish was never something that was discussed – you know, you are a Jewish child and you must do this and you must do that. At Christmas time I went one year to my father’s relatives in Gütersloh and the next year I would go to Berlin to be with my Jewish Omi’s sister and family.

So it was the best of both worlds but a child accepts these things very much more and it’s only now when I think back that I think how could I not have guessed that things were not the way it should have been, you know?

INT: Your parents must have been good at protecting you.

EF: Yes very much so. And, you know, the agony of my father seeing us off, you know, to the station that morning to get to the train and it still didn’t dawn on me. Dad would be coming… “Papa, wann kommst du ja?” [When are you coming?] so to speak. “später, später, ja…” [later later, yes…] And then of course we got to the railway station and all the SS were lined up and we were standing there with the parents and then they told us to come forward and my mother was allowed to come and help me up, and the steps on a German train are very high, and lifted me up and then the door was closed.

I could not believe that my mother was not with me. Couldn’t believe it! And there were…standing in the corridor…I mean the train was packed full of only children and then suddenly the train started and I can remember screaming, “Mutti! Mutti!” [Mother! Mother!] And somebody lifted me up and pushed people aside so I could see out of a window and my last memory of my mother was she was frantically looking to see if she could see me and I saw her but she never saw me, these last minutes. But it was a terrible, painful, painful thing, you know.

INT: Do you know how they were able to get you on to the Kindertransport? Did you ever find out how they achieved that?

INT: And what happened to your mother afterwards? Did you find out?

EF: Yes she was taken to a munitions factory and she… my father had to divorce her. He didn’t want to divorce her but she said, “It will be better for your safety and I will go”. So she agreed to that and she didn’t see him again. But it has been emphasised again and again by both sides of the family that my father wanted to stay with my mother and she would not allow it, so her child was going to be safe. And I think she had hoped she would get to Britain as a domestic because that was the only way they could get there, to be in service, but she never made it, so that is…that is it. In the records it said that she died of pneumonia but my cousin Kurt gave me that information.

He can’t do anything else now; he’s really my mother’s cousin but he was twelve years younger than my mother and he’s about twelve/thirteen years older than me and he lives continually now in the past, you know. And he filled me in with a lot of information. He saw my father, when he went back as a GI. He escaped from [Germany]…now he…I think he…yes, his parents died in Auschwitz but his grandmother died in Theresienstadt and he had a letter applying to get out to America and he doubled the letter over and they thought it meant that he’d got permission to get out. And he said “Raus” [out of here]. And he escaped and he went to America to New York, to our family doctor, Johnny Stern, who delivered both of us and, you know, it was amazing. And from there he settled and became an American citizen.

INT: And your father, did he spend the rest of his life in Germany?

Links to Other Testimonies by Edith Forrester 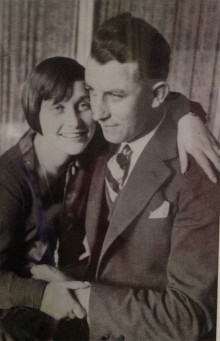