Frieda talks about her family background and her early education. She mentions that she lost her immediate relatives as a result of the Nazi regime.

INT: Do you think, do you think your complexion is so good because when you were a little girl you lived on a farm? Did you live on a farm?

FL: Yes I did. My grandfather had a farm.

INT: Oh what did you do on the farm?

FL: Well I used to watch… they had a maid, my granny, because she was actually a wee girl…from the country and she used to be very nice and good, you know. She was a lovely lady and I fair missed her when something happened to her.

INT: So your dad was called Samuel.

FL: Yes and he used to bake the Matzahs as well.

FL: There was a Matzah bakery in Haigerloch where we lived. And he used to help to bake them but he had his own wee baker’s place, you know. Baker’s….no a shop; it was just a small place where he done his baking in.

INT: [Looking at a photograph] And so that’s your father and obviously your mother wouldn’t be there.

FL: My mother’s not there, no.

FL: He wasn’t married then.

INT: No, he looks very young then.

INT: I would say he looks, what, about…? [Frieda looks again at the photographs of her family]

INT: So that’s your father and who else? Who’s that?

FL: My uncle, he had a knitwear factory in Wiesbaden.

INT: And was your uncle younger than…?

FL: He’s a younger brother. He was a clever one. He went to the grammar school but my dad didn’t make it. But he was good with his hands.

INT: What was the age difference between your father and your uncle?

INT: Right and do you know when you were born? If you were 92 that…

INT: So your dad worked in a bakery.

INT: Your dad ran, worked in a bakery.

FL: Yes. But he was killed in a Concentration Camp.

FL: And so was my mum. My gran as well…the whole family. [Only Frieda’s cousin and uncle survived and Frieda kept in contact with them in her later years].

INT: Do you know where they died?

FL: At the time I didn’t know. But it became knowledge then what happened. And that’s what happened and I had two brothers; they were the same.

INT: So, and were you living, when you said you lived on the farm, did you, were you all living on the farm with your grandparents? How did you come to be on the farm?

FL: My gran had the farm. My grandpa had died and she ran the farm for a while. We had employed… my gran employed… actually she lived with us and she ate at the table with us; she was like family, an orphan girl, Louise. She was a great pal of mine. She was very nice and good to me, you know. And I don’t know what happened after I left Germany. I corresponded with her for a while and then it stopped, I don’t know if she passed away or what happened. She had a daughter. She married in later life and she had a stepdaughter and I didn’t like her. I think it was jealousy because I was very fond of Louise; she helped to bring me up. My mother wasn’t keeping well. She had problems with her nerves and I think it was through Hitler because she was never like that until he was in power. I remember that. And she seemed to deteriorate quite quickly and I didn’t see much of her at all.

INT: And were you going to school at that time as well?

FL: Yes. I went to school and they threw me out because of my religion. I went to…I passed for grammar school in Crailsheim. C-r-a-i-l-s-heim. And I wasn’t allowed to continue my education. I was going to be a teacher of languages and I didn’t… wasn’t able to do that.

INT: What was your mother’s name?

FL: My father’s name was Sam.

INT: Did you go to…? I was going to ask; when you were in Germany did you ever go to the Synagogue? Or did you have any Jewish education?

FL: Yes I used to go with my gran to Synagogue. But I don’t know why I didn’t keep to the Jewish faith. It’s my fault.

INT: I think a lot happened to you, Frieda.

FL: I liked going but I’ll tell you what I didn’t like about, it’s Hebrew, They did everything, all the texts and everything was in Hebrew.

INT: You couldn’t understand it.

FL: I couldn’t understand it and I used to say to my gran;

“Why don’t they do it in German? Because after all we’re living here now and I don’t know Hebrew”.

INT: You didn’t get Hebrew?

FL: I went to school… the Jewish school for a wee while.

FL: It wasn’t a school; it was…what do you call it again?

FL: They had sessions for Ivrit.

FL: That’s the language in Israel.

FL: Because I was thinking of going to Israel at the time.

INT: Were you? Oh right.

FL: But I don’t know why it fell through. I think I met my husband and… Whatever, I don’t know.

INT: Did your brothers have a Bar Mitzvah?

FL: Yes. I remember my eldest brother had one in Haigerloch …in Germany. And my youngest brother then…he was killed by the Nazis before that.

INT: So when it was your older brother’s Bar Mitzvah and you went to Shul, you went to the Synagogue and you said all your prayers…

FL: Yes it was a nice Synagogue in Haigerloch.

INT: Did you have a party after it?

FL: Oh yes… no really because Hitler was on at the time and it was just a quiet…

INT: You would keep it low profile?

FL: Uh huh, didn’t want to make it too public or anything because you lived a very quiet life.

INT: Did you go for lunch?

FL: No, we had our lunch in my gran’s house.

INT: In your grandma’s house. What did you eat? Can you remember?

FL: Well the main thing was always chicken, a goose. I remember we used to have goose at Christmas and, you know, Hanukkah and that was always the dinner then. It was very fat.

INT: And if it was a birthday, if you were celebrating a birthday did your mum or your grandma make something special for your birthday? A cake?

FL: Oh yes. She always was a great baker.

FL: Gugelhupf, aye. That was a round cake in a tin, you know.

INT: And has it got chocolate and vanilla?

FL: I always remember the Streuselkuchen.

FL: Aye that was the pastry with crumbs on top.

FL: Sweet butter and cinnamon and all that.

FL: I used to try and make it when I was…after I got married and it wasn’t successful.

FL: That’s my grandpa and my gran, my dad and my uncle. [Frieda is looking at the photographs]

INT: Do you know when this was taken?

FL: He was the clever one… he owned a knitwear factory in Wiesbaden but my dad was a good baker.

INT: Because that’s when you would have photographs.

INT: And what is this Frieda?

FL: That’s the Kindergarten, the two Sisters. I went to a Protestant Kindergarten in Germany.

INT: I like the way everyone… You have your arms folded correctly but there’s one or two… So how come you went to a Protestant Kindergarten? Was that because it was close to where you were living?

FL: I don’t know why, because I think it was the only Kindergarten there. There was no Jewish influence there.

FL: No, very few. And I think that’s why. That’s the Sisters in the Kindergarten here.

INT: So were the Sisters nice?

INT: Were the Sisters who ran the Kindergarten nice?

INT: Were they nice people?

FL: Oh very nice, very nice. They kept in contact with me for quite a long while.

FL: After I left.

INT: And Janet is…

INT: She looks very much like your grandma there. You’ve got no photographs of your mother?

FL: No. My mother, she went mental through the Nazis.

FL: We never made it popular. Never liked folk to know.

INT: No. No they would keep it quiet.

INT: That would have been very difficult for you and your brothers.

FL: Because, you know, it’s not surprising because we lost our home…

FL: …Through it, yes. And my mother was very house proud. And I think it just all went for her. She wasn’t right.

She had to go into a home in Tübingen. And I missed her because she was a nice wee lady. She was quite small and slim and she seemed to change all at once.

INT: How old were you?

INT: You were only a little girl.

FL: …she was like a second mother to me. Then we were good pals and then they were killed [Frieda’s brothers].

Links to Other Testimonies by Frieda Laird 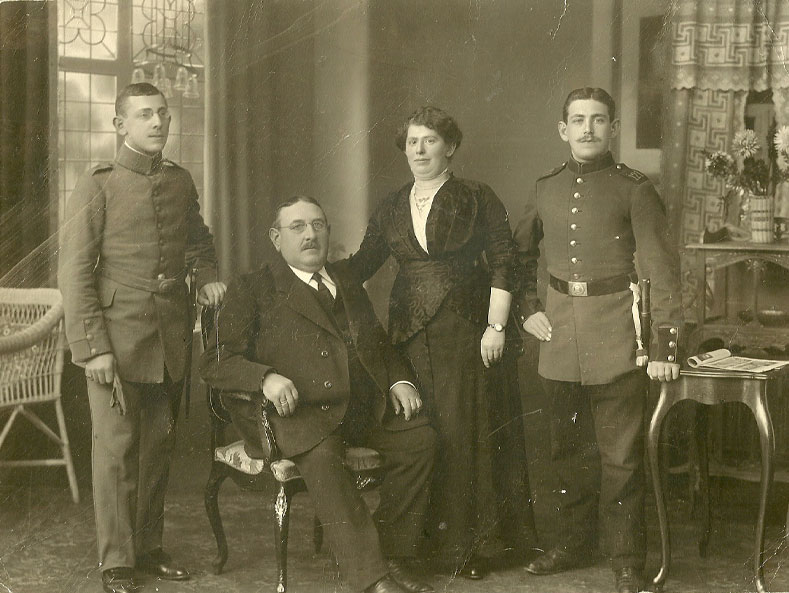 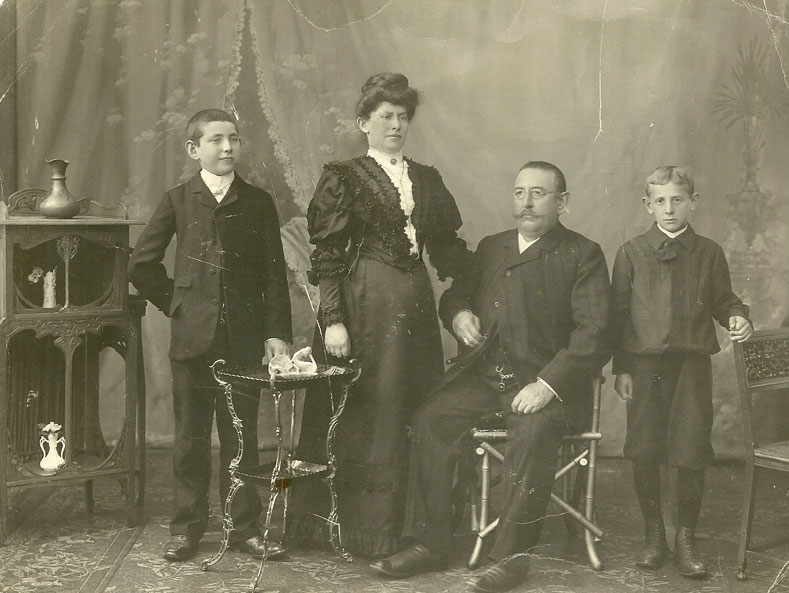 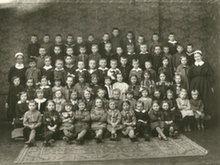