Alice describes her education. Then she speaks about the difficulties she met because she was a Jewish Refugee. We learn about her experiences as a kitchen maid in a stately home.

AM: So I went to school [in England]. I was not at school for very long, when the war broke out . In those days people selling papers were running round the streets, ‘Austria is Germany’; ‘Austria in the war with Britain’; ‘Britain is at War’ – I was terribly upset. What’s going to happen to my Grandmother?  I was already in bed in my digs and I ran into the street as I was, in my nightdress, there again I got told off. Not often I got told off but I did get told off – “How dare you come out here in that. Get back in there!”

That was my landlady, she meant well. It was a Jewish lady and she entertained a lady who had come also from Vienna and had nobody to go to and she used to invite her to sit by the fireside on her half day. And she ordered me to get back. I was very upset, very upset.

Well not immediately, immediately school continued in London. Gasmasks were handed out. My headmistress took a liking to me right from the start. Her name was Gertrude Armstrong. She supervised. I was to get a uniform like all the others. I guess she sent the bill to the office, I don’t know that. But I had a uniform with my badge, of which I was very proud. I had a velour hat to match my uniform in the winter and a panama hat for the summer; little white gloves and a blue gingham dress in the summer. And at the weekend on Saturday I went to look for a synagogue, from Kendal Rise I walked to the next district.

I think, I’m not sure, but I think it was called Queens Park, and I saw a synagogue. I went in, went up to the gallery. It was not very busy so I sat in the front row and looked around and on the side gallery I saw one of my Viennese classmates. I was ecstatic inside myself, waited for the service to finish and then singled her out. Her name was Erika Neumann and she told me that she was with a nice, young Jewish couple and she told me to follow her home and I would be able to visit her then. Well I followed her home, it was not terribly far from my digs, and another day, I think it was…it wasn’t on the Sunday, on Sunday I used to visit my mother. But when I did go, the lady who, I think they adopted her…

AM: She came to the door and said I had never to come again because she is now a London girl and she is not to speak German or have anything to do with me or anyone from the past. She is now their daughter. I did not attempt to find her. It was by chance, but from that day on I never attempted to find anyone.

AM: I did go to the office that helped my mother to bring me to try and bring my grandmother over but they said they have so many children to rescue that there was no chance. Well…The Blitz started in London and we had to be evacuated. I don’t know how it came about but I was to go to Luton with a few of my classmates. One of them was a cockney girl, Susan, with rosy cheeks, small (I was also small) and we sort of sat together, but my English was not very good yet. However, we arrived. I don’t know what happened to my case that I brought from Austria; I have no idea what happened to any of my things.

I think I rescued one of the books, or two of the books, but I don’t know what happened to anything else. Anyway, we arrived in Luton and each class had their own teacher whose responsibility seemed to be to get the pupils accommodated somewhere. Mrs Titwood was my head teacher and I was put into a house, a little house. It became evening. We had something for high tea and we were put to the bedroom. We had to share a double bed. The lady sat, knelt at the side of Susan’s bed, gave her an apple to eat, to clean her teeth with, and said to Susan “Repeat after me” and it was the Lord’s Prayer, which was said at school. Then she came to me, gave me the apple, and said, “Alice, you repeat after me now.” Upon which I said, “Thank you very much but I am Jewish.” “What? No Jew shall have shelter in my house!”

AM: Gas mask. Mrs Titwood came and said, “I’ve been informed of what took place and I’ve been trying all morning to find you accommodation but because you’re Jewish I had great difficulty.”

INT: And she told you that? Lovely.

AM: She had to tell me because there was a small Jewish community but they wouldn’t have me either.

INT: Tell us about that.

AM: It may be that it was a second home to them, that they had just taken it on to escape from London. Because people from London travelled to Luton and they had businesses in London or jobs or whatever.

AM: Anyway, she said, “I have only just found a home for you. You are the only person they are going to take in as a result of what I’ve told them.” The name was Alcorn – A-L-C-O-R-N. They had one little daughter called Pamela. Wouldn’t it be nice if I met her? And they were lovely people. The gentleman worked for a biscuit company and they were absolutely lovely to me. Unfortunately the lady suffered from arthritis and she was only a young woman, pretty lady, but I was allowed to help her in the kitchen.

School only took place once a week, which we shared with the high school in Luton. We met every day under the bandstand in the park and often got soaked but this once a week was most interesting because it was not to learn anything but it was art.

AM: And there was another Jewish girl in my school in London who was evacuated but she was not in my class and she was a lovely featured girl and she was this day made the model to sit in the art class and we had to draw her, and mine won the prize. I was so thrilled with that, Ingrid her name was, she was German and she didn’t last. I don’t know whether her parents took her back to London or what but she did not last. It was not a very happy time.

We were knitting there. I knitted a pair of gloves and it was so cold that I was shrivelled up and the knitting was so tight that I’ve disliked knitting ever since. I still hunch my shoulders if I try to knit. I don’t know how or why but somehow it came about that my headmistress had been in touch with my teacher and had said to her that I…camps were being organised for refugees; they were called ‘aliens’, ‘friendly aliens’ and she thought that I would have to go into one of those camps. Although it was not legal until a certain age, but they didn’t know what to do with me so they thought I would have to go there. So the headmistress found a type of people, Admiral and Lady Meade-Featherstonhaugh. Featherstonhaugh, in an estate in Petersfield. The estate is now on view to the public – it’s called Uppark, U-P-P-A-R-K. Because it’s on view, Adrian [my son] told me because he wanted to take me, I said “No way”.

Well I was taken in to be a kitchen maid. Now, they entertained the Queen and I could look out from the basement and see the Queen Mother and all the nobility. The men used to come into the kitchen with rabbits to be cooked, skinned and cooked for their dogs. I learned how to skin a rabbit because I was a kitchen maid and I was to be a help to the chef and the assistant chef who was a Hungarian lady called Veronica Klaus. She was not Jewish; she was a very staunch Catholic. I have never yet met the chef because he was permanently drunk and never, ever showed up and so it fell upon Veronica to do all the cooking and entertaining for the nobility and on me to do all the cleaning of the vegetables as well as the scrubbing of the corridors.

I used to get up at six in the morning to do the cleaning of the corridors, which housed the troops on their way. And they had nowhere to go, there was no toilets or anything for them and I had to clean that up before I started cleaning the vegetables for everybody. The plus was that Lady Meade sometimes asked me upstairs to find out different things about me; she was interested. When I cut myself and it went septic she took me to the doctor. She had me registered so I wouldn’t have to go into one of the refugee camps. And Veronica always gave me double helpings of food and I put on weight. But when it came to Rosh Hashanah and Yom Kippur, I hadn’t seen a Jewish face in a long, long time. I wrote to the committee and said that I would like to attend a service. Where could I find such a thing? The answer came back, everything was done by letters; there was no phones, or there were phones but not for me.

AM: And she had written to tell me that somebody would meet me in Petersfield because Uppark is in the country, beyond the village. Petersfield was the nearest town and she told me where to go in Petersfield. Of course I was getting paid so I had money for a bus but the butler said he would take me. Little did I know I would be pillion riding on a motorbike! I hung onto him, hung my arms round his waist for dear life! Down the hill, up the dale, and then he just drove away. I met that lady and she was not Jewish and she took me to a Jewish house where the service was to take place.

AM: There were not many people, enough to fill a little house and I looked towards the back and there was a kitchen. I heard somebody groaning and I went in and it was a young woman pregnant. I didn’t know anything about what to do in a case like that but I was willing…Now, in later years I found out the lady was the sister of who became the Rabbi’s wife in Giffnock.

AM: How’s that? And then I went in to the hall, into the service, which upset me terribly… Not for myself but because of the woman who was there sobbing, sobbing. Her little boy had just been killed by an accident in the street.

I thought my problems were none at all. Anyway, I stayed and they said, “You cannot go back because it’s Yom Kippur” – that was Yom Kippur, “You stay here.” And I shared room with…woman I shared a bed with who became…Rebbetzin [Rabbi’s wife] Rubinstein.

Links to Other Testimonies by Alice Malcolm 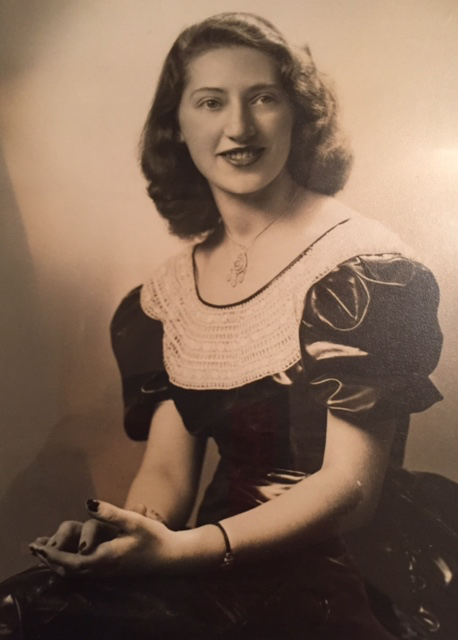