Evelyn describes how her family was arrested in Germany in 1938 and transported to Poland. She explains how they reached Britain and talks of their life in London and Glasgow.

NT: And how did you come to Scotland?

E.S: Well we were arrested in 1938 and put on a train to we didn’t know where, but ended up in a forest. And it was obviously outside Poland and we were told to get off the train and start walking in the night, in the rain. And all of a sudden the Poles started shooting and everybody started screaming and the Germans went forward and said

‘We’re not starting a war; we’re just bringing a load of refugees’.

And they let us in to Poland. And my father went to his uncle and said could he come and pick us up and he…We had nothing with us. When we were arrested we’d absolutely nothing, just what we stood in. They gave us food everything and then we had to move on to Krakow. My father got a little flat and we lived there but my father said, this is 1938, ‘We’re not going to survive here.’ and he got some friends in London to write a letter saying he must come to London very urgently, which he did. And his friends (he couldn’t speak any English), his friends said you must go to the Home Office and try and get your family out.

So the first letter was ‘No.’, the second letter was ‘No.’. So my father had a lot of furrier friends, they were all furriers, all good friends and they said ‘Why don’t you start a factory?’ He had a big factory in Leipzig with about 17 employees. So he started a factory and he wrote to the Home Office and, I’ve got the papers, ‘Tell your wife to go to the British Consul in Warsaw and you will get papers to enter Britain’ which immediately she did. And we had to go through Germany and we wanted to say goodbye to my grandparents but they wouldn’t let us stop, we had to move on. So we went to Hook of Holland and then to Harwich where we met up with my father again. That was the start.

INT: And how did you end up here in Scotland?

E.S: Well we went to London and we had money because my father had sent money over and we had started another factory, we had all our friends, all the furriers and then the bombing started. And for 9 weeks we had to live in the shelter at night, every night in the shelter; I’ve got a picture here. And somebody said ‘Come to Glasgow’ so we thought that’s better because it was bombed out. We lost everything, everything was bombed out. So we came to Glasgow and Paul Fields, (I don’t know if you know him, I’ve got a picture of him) he was the one who said come to Glasgow and the night we came to Glasgow was the Clydebank Blitz.

E.S: Yes. So my father said we must find somewhere to live and we bought a, no we rented a bungalow in Kilpatrick Gardens and the neighbours all came round. Refugees are here and the non-Jewish people were too wonderful; they were absolutely wonderful. My mother never knew how to light a fire with a damper – ‘what’s a damper?’ We had central heating. We lived, you know, very well. We had no trouble until that ’38.

INT: That was very fortunate. And what did you do? You were still very young – did you immediately go to school here in Glasgow?

E.S: No I went to school in London and the teacher said well just bring your little brother as well. The Belair school and they were very nice and I had lunch there and we got something called jelly. I said ‘What is this jelly?’ I’d never heard of it. It was in a little container and it was lovely. I enjoyed my jelly, it was lovely! So I came home and I told my mother ‘We had jelly’.

INT: And you must have quite quickly picked up English?

E.S: Oh yes. I don’t know how but I did… So mother spoke to me in German, I spoke to her in English. So she learned English and my father learned very quickly. Quite amazing. Then when we came to Glasgow, I went to school here and made a lot of nice non-Jewish friends.

It wasn’t until I went to Maccabi that I really got into the Jewish way of life again.

E.S: Yes we all came to Glasgow. And I must say my father met so many people in the fur trade and in London. I mean the furriers, in the fur trade people seem to cling together and help each other. If somebody had a coat that they didn’t have and somebody said they wanted this coat they would phone round – ‘Have you got such and such? Send it over.’ You know they always helped each other.

INT: And during the war he must have been getting the pelts from Germany or somewhere?

INT: Do you know where he was getting them?

E.S: The pelts came from Russia.

INT: I see. They were able to get them even during the war?

E.S: Yes. I don’t know how. But they came, what they called, they weren’t finished and they had to go to a chemical plant because they were raw and when they came back I had to slit them, the backs and the front. And I worked in the factory, I quite enjoyed it actually. But I don’t know where my father got the pelts.

INT: And did your mother live in Glasgow with you afterwards, after your father had died?

E.S: Yes, yes. My young brother was 3 and it’s amazing, she has written a little booklet; everything is in there.

INT: Is that what you called him? Pauldy?

E.S: Well Roland got away, went to… it’s in my mothers book but I think the others all died.

INT: He was very handsome too.

E.S: And my uncle Benno; he wrote a very funny story, very funny.

INT: And Benno perished in Auschwitz too?

E.S: I’ve got the pictures.

INT: So they must have been taken from Germany once the war began? Is that right?

E.S: I really don’t know. That’s Weißensee; my grandparents were buried there.

That’s my mother’s head there. They were buried in Weißensee in Berlin. But they lived throughout the war in Germany and that’s in my mother’s book.

INT: So that’s, so one set of grandparents survived the war. [There is an article about Evelyn’s Grandmother in the newspaper resources section of the site].

INT: And the ones in Poland didn’t.

INT: Is that how it worked?

INT: Ah. That’s interesting. So they managed to live through the war in Germany?

E.S: Well they were hidden.

E.S: Behind a false wall.

INT: Really? By whom?

E.S: And the people brought them food.

INT: So non-Jewish people protected them in Germany, in Berlin?

Links to Other Testimonies by Evelyn Strang 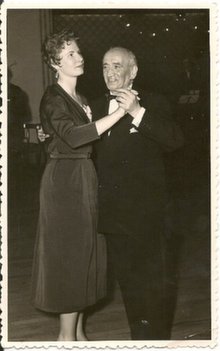