Gretl says that she feels truly British and has many non-Jewish friends though she is, of course, proud to be Jewish herself

INT: She, as a Quaker, did she ever try and suggest that you should join her in her worship?

G.S: Oh, no no no. I mean I used to go with her to meetings, into the meeting house but she would never have. No, no, she wouldn’t want to convert me or anything. No, no, that wasn’t in it. And at first I used to listen, because I don’t know whether you’ve ever been to a meeting house in the Quakers?

Well, most of the time you just think, and you can think any thoughts you like but every now and then someone is moved to get up and say something, you see. But after a bit, I asked if, on the Sundays, I could take a book with me and she said ‘Certainly’. So I would read a book and then if somebody spoke I would listen and that was it. No she wouldn’t, she wasn’t the type to be evangelical or anything. No, no Quakers don’t do that.

INT: How did you go about, then, following your own religion?

G.S: Well I’m not exactly a, you know, terribly observant, but I’m very proud to be Jewish and I even belong to a Synagogue now.

But I must confess that’s because my, my daughter-in-law likes to keep a Jewish house and I like my own grandchildren to participate and so I go as well on occasion, but it’s only for special days that I go to the Synagogue.

INT: Can I ask you what happened to your sister? And to your brother?

G.S: Well my brother, he went to Israel just before I went off to England and he’s in a kibbutz and very happy. He’s got three children. My sister came here and she came as, what was called ‘lady’s companion’ but turned out to be housemaid and I don’t know whether you want to record this but it was in ..eh.. what’s his name?… In the household of a man who became Minister for Agriculture

INT: Oh, I can’t remember back that far, it doesn’t matter

G.S: Anyway, and it was an upper class English household- can you imagine? She was maid, it was like ‘Upstairs, Downstairs’, you know. It’s fantastic. And she came from a house where, you know, she used to go to opera and that kind of thing and there she was emptying potties.

INT: Oh, gosh. How long did she last?

G.S: Not very long. She was really very unhappy there, as you can imagine. The only nice one was, really, was the man who finally became Minister for Agriculture. Soames you know Soames?

Because he was about eighteen at that time and he used to call her in for silly things, you know, and told her to put on records that she could hear because he knew she brought masses of music with her you see. So that was the only nice thing. But then two ladies came to the house of the Soames’ and they met her and they sort of said, ‘Oh she can’t stay here, she can’t stay here’ And they took her in and she was married from their house. Quite nice.

INT: So it was a happy ending after all?

INT: And quite soon after you left

G.S: Well about three years after I left.

INT: When you look back on your time as a teenager here, do you think back at yourself as being a German teenager?

G.S: I always thought myself more English than the English! Yes.

No, I hated everything to do with Germany. I really didn’t want to speak German, hear German, read German or anything.

INT: What about now though you’re here in Scotland?

G.S: Well, funnily enough, recently I’ve thought maybe I ought to start reading a bit of literature, German literature because I haven’t really, you know, I mean what you read before you’re thirteen, you know, before you’re fourteen, it’s rather minimal really.

INT: And you’ve been here ever since?

INT: Do you ever go back, do you ever want to go back to Vienna?

G.S: I have. I was back in 1948 to see who was still alive. An uncle of mine, a dentist, he’d been to Dachau concentration camp but he’d got out.

At that time you could still get out sometimes if you got a visa to England. And he came here during the war and then went back to his wife. She wasn’t Jewish you see, stayed in Vienna all during the war. So I went to see who there was but that was all there was.

INT: Just the two of them?

INT: Do you ever want to go back now?

INT: You said you were homesick? So it was homesick for here?

INT: So you don’t even – you consider yourself British completely?

INT: And with your brother in Israel have you ever been tempted to move?

G.S: Well yes. At that time when I went there for a year I thought I might stay but I didn’t really because I was too homesick for here. I couldn’t stay.

INT: Yes because your husband was Jewish too?

G.S: Yes, my husband was Jewish.

INT: Did you find that it was easier, did you find you gravitated more towards people who were Jewish when you came here to work?

INT: So it was just a happy coincidence?

G.S: I’ve never asked anybody, you know if I meet somebody I don’t say to them ‘What religion are you?’ If I like a person I talk to them and we become friends and the fact that one is a Catholic and one is a Protestant and one’s a Jew doesn’t really make any difference.

INT: As a mixture of all three

G.S: Well, you know, I have a very good Catholic friend and lots of Protestant ones and it doesn’t really make any difference

INT: Yes, it doesn’t matter at all

INT: Can I ask, it may seem a silly question, but how did you get from entomology to pottery?

G.S: Ah, well yes. Hmm good question! Well, because I had children I had to stop work you see so then I had to do something. I, you know, to do. And I was always interested in pottery actually. I’d met Bernard Leach down in Cornwall once and anyhow I was always keen so my husband said he’d make me a wheel if I was any good at it. So I started taking classes and when my children, when my girls were born, I started really. Pottery. And he made me a wheel and I worked downstairs and I have a little workshop downstairs and so it grew and I’ve now been doing it for thirty-one years

INT: And you never went back to entomology?

G.S: No no. Because, you see, after a few years you find you’re out of date. You, you know, they’ve got new methods and so on.

Links to Other Testimonies by Gretl Shapiro 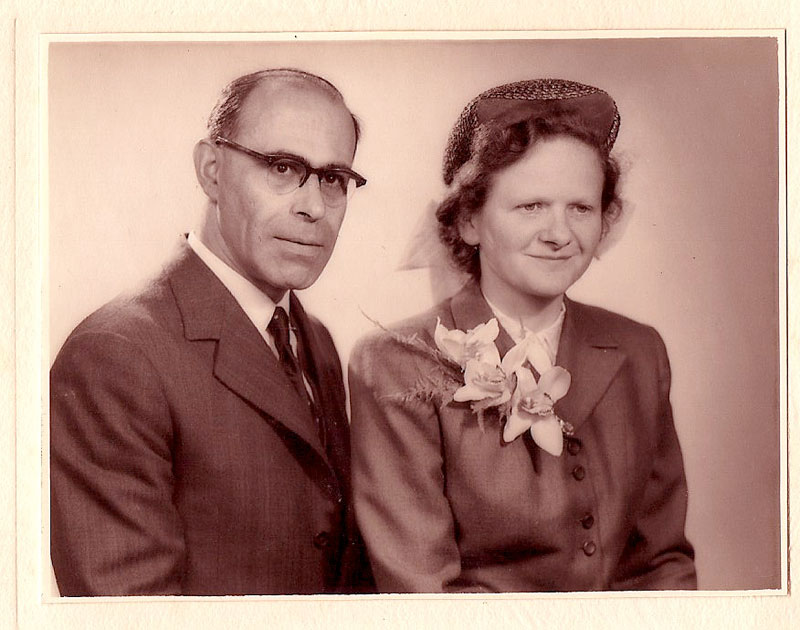