Gretl talks about life with her new guardian in Coventry and describes her education and the evacuation of her school during the war.

INT: This is the lady that you eventually called your aunt?

INT: She actually brought you up?

G.S: Yes. She did yes. She brought me up, she paid for my education. She was wonderful, really, an extraordinary woman. Never made you feel you owed her anything, always approved of what you did. A fabulous woman, really.

INT: Did she welcome your sister into the home regularly?

G.S: Oh yes! Yes, yes she asked that my sister should come of course and, oh she was, I’ve never met anyone quite like her since.

INT: So it was straight into school then?

INT: Just learn from the beginning. You weren’t cosseted at all?

G.S: No. Well, I wouldn’t say cosseted but they were in the middle of their exams I remember and I did the art exam only I didn’t know what the questions were about, they had to be explained. And then I followed my aunt for a bit. Wherever she taught, I was in the same class. I sort of followed her around the school for a bit and then I just joined the ordinary class and less than two years later I was sitting school certificates, so.

INT: And your English obviously came along

G.S: I think so yes because I had to speak English all the time

INT: Was your aunt then, one of the ‘Society of Friends’? Was she a Quaker?

G.S: Yes. She was a member yes. She was a Quaker and she had heard about what was happening in Germany and Austria and eh, she let it be known that she wanted to adopt somebody, to get somebody out – a child out.

INT: Did your mother make contact with you after you left Austria?

G.S: Yes, I had about two/three letters after. But then you see, there was such a short time, you realise.

G.S: And we were scared to write through the Red Cross because, in case they were hiding, you see, and we didn’t want anybody searching for them if they were hiding. They are just sort of, they are really rather limiting in language because she’s trying to write in English and her English wasn’t all that good. But well I mean they are mother’s letters that she would try and not cry I suppose when she wrote them.

INT: So you didn’t know what had happened?

G.S: No. My brother-in-law, that’s my sister’s husband, he was in the army of occupation and he had special leave to try and search for them, to see what had happened to them. And, I’m not quite sure whether I was told the real story of this or a sort of expurgated version but what I was told by him was that they were sent on a transport from Vienna in 1942 to Poland and a doctor, a Jewish doctor who was also sent, he made a list of the names of the people on that train. But they never arrived – there was no record of their arrival so whether they died on that train I don’t know.

It could well be because they were sort of cattle trucks with people just pushed in, you know. Far too many in a truck, and so on, without food and water. So it could well be that they died on the journey – I don’t know.

G.S: No. I won’t know. No. Because even, I was in Israel and there is a, a place there where they have collected the names because the Germans were frightfully efficient. When they killed people they kept records in the concentration camps of all the people they “processed”, it’s like what they call ‘processed’. And there are these thousands of names, thousands of names.

But they tried to look up the name but they couldn’t find it so I don’t think they ever got as far as the concentration camp.

INT: So they died on route you think?

INT: And quite soon after you left

G.S: Well about three years after I left.

[Gretl now talks about the support she received from her guardians.]

INT: Did they encourage you to get on, when you came here to England and to go to school and usual things like that?

G.S: Oh yes, this is exactly yes. She sort of felt I must behave well and I must do whatever the lady said and so on and so forth. And I did try. I mean, you know my guardian was a history teacher and I was determined to do well in history and, you know, I did. And that was one of the things I must say I did work at.

INT: Did she become for you a substitute mum do you think?

G.S: Yes, yes, yes. And she had a very sweet sister called Olive who was a very motherly sort of lady and charming, you know, lovely and she would come and, eh, tuck me in and kiss me, that kind of thing, you know. That helped, helped greatly.

INT: Yes because it must have been difficult for women who had not had children around.

INT: I mean it’s one thing to welcome another child into your home if you already have some but if you haven’t got any yet, they were learning weren’t they? With an adolescent.

G.S: Yes. Although they had also, I was telling you about their real niece – they had had a lot to do with her as well so they were used to, sort of, teenager. They were. And of course, you see, I came to Coventry and then the war broke out and the school was evacuated and we, the whole school went to Leamington Spa. And then nothing happened in Coventry, no bombing for a bit and we all came back.

And then of course there was the blitz and we were right in the blitz. My school was bombed and we were evacuated again to Atherstone in Warwickshire. But because of that I lived with a lot of other children together and my aunt was there all the time which was more than some of the children. You see the other children didn’t have their mothers with them, so I think that made it easier because it was a boarding school then and the mothers and fathers came to visit at the weekend and that kind of thing and I had my guardian there all the time.

INT: Was she very pleased when you went on to study A-Levels?

G.S: Yes. Yes I think she took a delight.

In fact, this is what made her so lovable because she took a delight in all, any success, you see, she really took a great delight. She never disapproved of anything. I don’t know – she was just wonderful.

Links to Other Testimonies by Gretl Shapiro 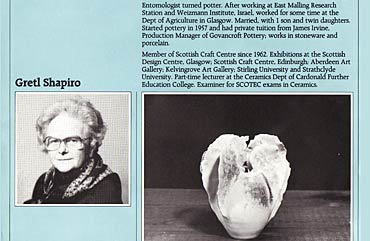 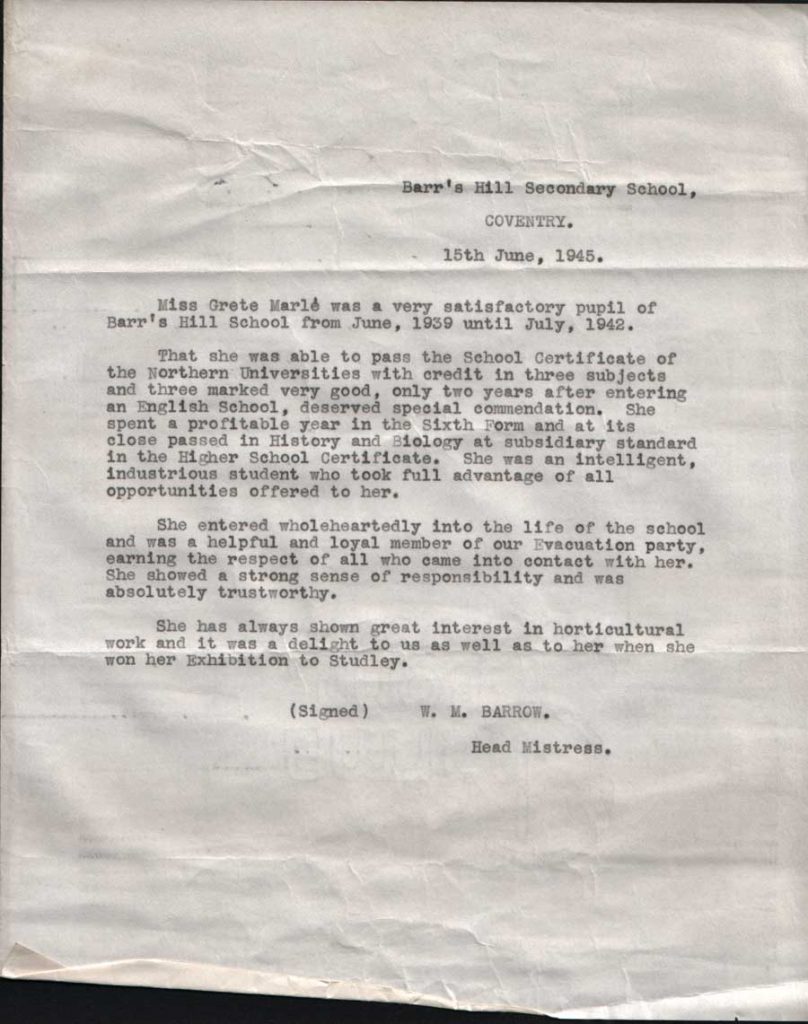