Judith describes her arrival in Glasgow and the challenges of integration. She then talks about returning to Hungary, where she was finally reunited with her mother.

INT: And then you came to Glasgow after the war.

JR: After the war, after April the 14th, the 15th, we were on our way home to Glasgow. I came on the military trains.

JR: April 1946, yes I’ll try to keep the dates correct. And we got home and there was great shortages at home, Oh God. I remember my father-in-law brought in 12 eggs – ‘I got these especially for you to come home’. It was such a big…he thought it was a treasure you know. It was such…In Britain they were fairly short. For quite a few years there was great food shortage. But as it happened Harold didn’t make much money, we couldn’t afford very much! Even food was short, yes.

INT: And did you start mixing in Glasgow with the Jewish community through Harold? What happened?

JR: Now it was first very difficult. We were Garnethill (Synagogue) members. Harold was a ‘West Ender’ – But he lived with his parents in the West End and my mother-in-law said ‘You must come to Shul’ and I went to Shul. But the Scottish people…it’s so much easier to talk to Claire (interviewer), as I know who your mother was. Here is somebody who is Hungarian, what do I ask her? My father is here…And nobody was interested in where my…So they didn’t talk to me, you know. So at first I could have been anybody. It was very difficult.

There was one family in Glasgow who overcame it right away and its funny, yesterday I spoke to her. It was called the Naftalin family, Suzie Naftalin’s mother Beulah, her dad, Leslie and (uncle) Sydney (and aunt, Marjorie) they came forward, said, ‘You are from Hungary, you must come and visit us.’ So they were my first contacts in Glasgow and then it takes a long time. I don’t blame the Glasgow people; I don’t know how I am with foreigners. You know how it’s very difficult to go over and ask, ‘How are you?’ you know.

JR: But even Dr Cosgrove (the minister of Garnethill Synagogue) – do you know when I was in Glasgow, the Chief Rabbi was called Brodie and Brodie came to visit Cosgrove and Cosgrove said,

‘I hope Judith you would like to meet him’

Do you know I was invited to Cosgrove’s in the afternoon, Brodie couldn’t care less, couldn’t care less. It didn’t matter to him. You see British people never realised what it was, the war. Did your mother ever say that? No?

INT: I don’t remember her talking about that, no.

INT: Did any of your family come out of Hungary and join you?

JR: When Harold decided to marry me in September and I said I will have to go home with my mother because we were looking for my father. My father disappeared in Auschwitz and mother hoped that no doubt that he will be alive, you know. So mother wanted to go home and Harold says

‘Please leave your daughter back, I will marry her.’

And my mother says ‘How can I rely on that?’

Harold says ‘I promise you I will marry your daughter.’

And I had this job in the military government and they wanted to keep me. And my mother went home with my sister. It was a very complicated journey. They could only get onto a train that went east and Harold from all the officer friends and everything collected coffee, cigarettes, chocolates…And my mother had nothing in her bag but goodies and that’s how she paid her way home. It’d taken over a week; I think it was even longer because you couldn’t get on a train, you know. And she got home and of course she had no house. In Hungary they said, ‘Hitler didn’t do a good job’. ‘What are you coming back for?’ People who were in your house didn’t want you.

JR: Eventually… My mother had two brothers in Budapest and she went to Budapest and she stayed with the brothers until eventually I think one of the brothers got her a flat. It was a very poky little flat but it didn’t really matter. But…And my sister went home with my mother and they had a very difficult time. So I have not managed to talk to my mother. I didn’t know where she was; she didn’t have a telephone. There was no post; there was no way to finding out. Until one day my mother must have gone… In Budapest there was a ?- how do you say that? …?… is a…Do you know any Hungarian?

JR: And there was tables and tables of letters from everybody looking for relatives and my mother, by sheer mistake, picked up a letter, who was one of my father’s brother’s sons from Vienna, sent it over. “I am looking for my family; they are called Weinberger” you know. And my mother found that letter and somehow this cousin…I don’t know how. Through some…I think it was called…It was a Jewish organisation and it came to me. How did I get it? I don’t, I really don’t know the detail.

But that was, I married in ’46, that was not until ’48. I have not known if my mother got home; if they live or don’t live. There was no way of finding out because my mother didn’t know my address; I didn’t know hers.

INT: Once you found that out did you try and go back?

JR: I’m just trying to think. Do you know that I’m not absolutely sure. I think Harold eventually got in touch with the Jewish Centre in Hungary and how did he…? Because he knew, we knew that mother went home and the Jewish Centre was in Budapest, you know. After the war there must have been lots of groups of people who got together.

I can’t tell you for sure that I know, you know. And somehow we got in touch with my mother. And in ’49, I think the first planes started to fly; until then there was absolutely no contact. I didn’t… And by that time my mother contacted us or Harold contacted her, I really don’t know. And all that I wanted to do is maybe we could go home if there’s a plane. Now, I didn’t know where my mother lived in very poor circumstances and I think it was 1949 or 1951 – now I’m not sure of the date, we couldn’t afford even to get an air ticket and my in-laws helped us to get a ticket. I think to go to Hungary and have the hotel and everything all together cost about twenty odd pounds, you know, and we did not have the 20-odd pounds.

Harold was working for his uncle – it was the family business of shoes; it was his grandpa’s and…But the grandpa was 90-odd years old and I think up until now he had a monthly salary and then they put it over to weekly and we got another £10 and I think with the £30 we went. We went home and met my mother. It was, she was really poorly off but we’d taken her presents. We couldn’t leave her money. I didn’t have any money. We’d taken her presents and that was very valuable in Hungary. I never knew – a 200 pack of cigarettes…And that was a fortune.

JR: And coffee and you know, what you could get here. And I think we were home for a week. I’m not sure about the things, you know. If you say to me it was 2 weeks – it feels like, now like a week. And then we came back, and my in-laws, my mother and father-in-law, they thought we would never come back. There was no train; you know, there was no communication.

Links to Other Testimonies by Judith Rosenberg 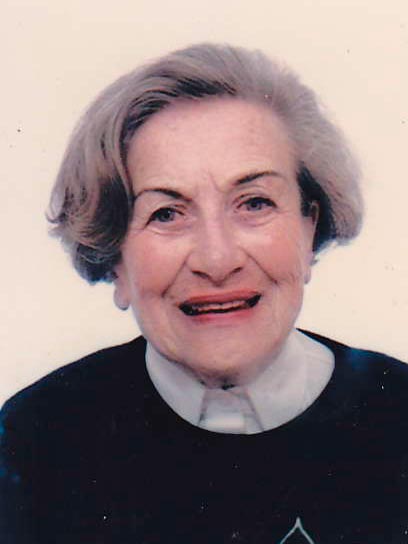