MG:I then went to London and wrote to London University, sat an entrance exam and got through and then I realised that my one thousand and something pounds was not going to stretch to take a degree so then I got a job in Bradford, again in textiles which wasn’t very much. Then I got a promotion. I got a job in Kilmarnock as a dyer. You know what a dyer is? It’s a textile chemist, that kind of thing. So I did this and I then met my wife and got married and two years later my wife decided that she will work and I will go back to university. So I, this time I went to Glasgow to do an ordinary degree in chemistry which, because I was a dyer, I thought I could do that. And one of the professors, Dr Bell, came up to me one day and said ‘I notice you are doing an ordinary degree Mr Garber’

He said ‘No, I think you should do Honours’

So that was, so I did Honours and I then did MSc and that was it. And after a few years of teaching here in Scotland I got an offer to teach nuclear physics in Vancouver so I went there.

INT: And where were you teaching in Scotland?

MG: Round about the Glasgow area.

INT: Was that in schools or?

MG: Schools. Well I did a bit of lecturing at Glasgow University and at… what’s it called? One of the colleges in Glasgow.

INT: Forgive my ignorance; if you did a degree in chemistry is nuclear physics related to Chemistry?

MG: Very much so.

MG: Actually the peaceful nuclear production, the uranium is split and it gives you the power. It then gets used up, it gets diluted actually. It has to be taken out. After that it is a huge chemical process. Very much involved yes. To dissolve the rods you have to precipitate the things that don’t belong in there and so on. It’s being now done at Whitehaven, near Whitehaven.

INT: Now I know why you were in Vancouver. How long were you there? Because you must have come back from Vancouver.

MG: Oh yes. When we got a bit older my mother in law was getting a bit old, my sister in law lost her husband and other kind of things.

INT: And that brought you back here?

MG: That brought us back yes.

MG: No, don’t forget by the time I got my degree I was already in my late thirties so…

INT: You were getting older.

MG: Yes so I just finished off teaching for a few years in a school and retired.

INT: Excellent, you certainly had lots of adventures. Once you were here in Scotland did you mix with former Polish people or Jewish people?

MG: No, by the time I came back from Vancouver the Polish community had diluted itself and I actually lost contact with them. Not that I had much contact with the Jewish community. My wife knew quite a number of Jewish people but I didn’t so… She actually worked for a while in jewellery for several Jewish people as a manageress. People called Jaffe? Do you know them?

INT: I think we know some people in Glasgow now called Jaffe, yes.

MG: Well one of the Jaffe’s, her husband was called Coates, Isi Coates and he had a jewellers. My wife was his manageress and before that there were also a family called the Crabbes, they had a jewellers shop. And the Pattersons, they are still operating, my wife worked for them also.

INT: And what…Did something bring you back more into the Jewish community? Because I know you attend AJR meetings.

MG: My dentist is

MG: Norton Grossman and one day he said to me why don’t you do some voluntary work? My wife died. I thought why not. Then East Renfrewshire phoned me and said ‘Are you Jewish?’

‘Well there’s a synagogue in so and so. They require some assistance in the office’

INT: Oh that was the Reform, was that the Reform synagogue?

INT: Right and that’s how you met the Ansons.

INT: We always ask if you feel a sense of identity with where you came from and where you’ve arrived. But you’ve had so many places in between. Is it a hard question?

MG: Yeah it is. I retain a measure of, shall we say, of sympathy for Poland although it no longer deserves it, but I do retain it. To what extent I feel British? I felt that once I had become a British citizen then I was in Canada there was a degree of pressure to become a Canadian citizen. I didn’t, I didn’t bother. So I don’t feel too much. I am interested in what happens in the country but whether I am committed to it is a different story and difficult to say. For instance I certainly wouldn’t vote SNP so am I committed to Scotland? I don’t know.

Links to Other Testimonies by Moniek Garber 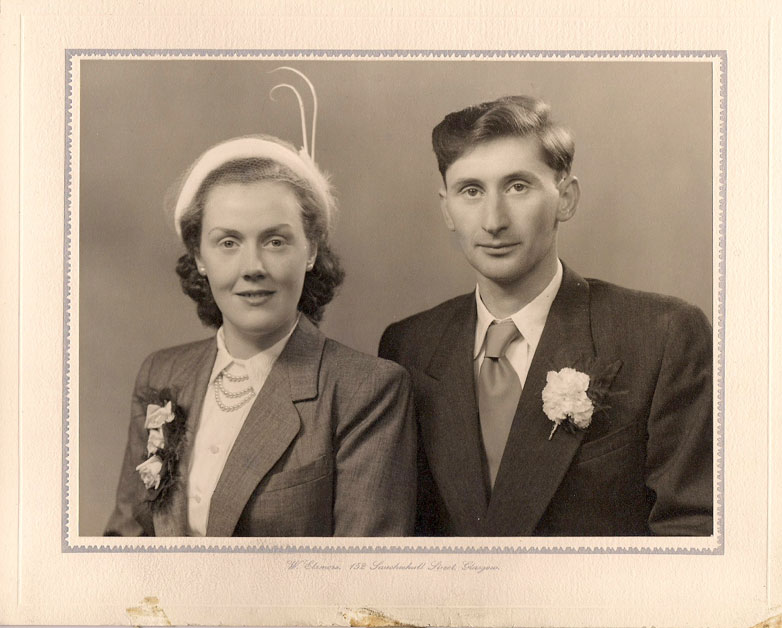