In this section Bob explains how he came to Scotland and what his initial experiences of life in Britain were.

INT1: When did you arrive in Scotland and how old were you then?

BK: As I said, I estimate I arrived in Scotland about forty nine. 1949. And how old was I? Well you again

INT1: You must have been about 25 then

BK: Well, my mother had remarried recently, so they suggested my mother and my step-dad actually come to Scotland and try my luck from here

INT1: Was he Scottish?

BK: No he was another Polish; Polish Jew

BK: But obviously he’s much much older and he’s long, long dead now

BK: But he had lived here for many years

INT1: Right. Where did you stay when you first came?

INT1: what was your impression of Scotland and the people when you first came out?

BK: Well, I say that… I thought Glasgow was grimy but great. That’s good alliteration. Grimy but great. And the people were wonderful. I didn’t meet much racism. In fact I found none. But I did, I was aware of the hatred that the Catholics and the Protestants carried for each other and of the effect it had

INT1: And you think it made it… it easier in fact to be something else?

BK: Oh yea, they… took no notice of me being Jewish

INT1: …did, did you mix with… well, obviously you mixed with Jewish and non-Jewish people…

INT1: …were the Jewish people that you met here, did you mix with them through the Refugee Centre or…

[Bob then continued to explain how he travelled to the UK]

BK: So I went from Milan to the Brenner Pass where the Italians whipped me off the train and said my papers weren’t in order and they kept me for another twenty-four hours. I stress that because that twenty four hour delay meant that there was no one in London waiting for me. So there I was, fifteen years old, skint, hungry, lonely, terrified and no English. Not one word. Not a word and some refugee organization picked me up and took me overnight to some pretty grotty shelter. But the next morning, this limousine turned up.

INT: So you were living with Mr. and Mrs. Reigate and did you arrange this errand job with the German Jewish Aid Committee?

Bk: That was almost the same thing that I’d done in Milan and Mrs. Reigate helped me to meet these people at Woburn House.

BK: And I was an errand boy there again, a filing clerk.

INT: And what age would you be by then?

BK: All that happened over a few months.

BK: I became a filing clerk and I used to run errands and do a bit of filing and amongst my jobs was when files made up of people’s cases, case files, whenever I got them I had to file them in alphabetical order and I got my mother’s file. So I used to promote it to the top of the pile all the time.

BK: And that is as far as I knew. I helped her in that sense but after that I don’t know what happened.

Anyway I was an errand boy. I even met the famous Lady Reading. I think she was the wife of the vice…not vice-chancellor…the Queen’s representative in India.

BK: I’ll think of the word for it in a minute. Anyway, she was a big shot. I remember she stopped me in the corridor, big moment in my life, and she said ‘What are you doing here young man?’ by which time I knew a few words of English and I explained and she gave me half a crown.

BK: Which was valuable. I had this big silver coin in my hand and I felt rich.

I’d never really had money of any kind except pocket money from the Reigates. But I did this job until I left there to go… next is….Mrs Reigate and Mr Reigate were wonderful with me. But I think I must have been a little bit hard to live with. I mean I wasn’t exactly a disciplined youngster so I daresay she got tired of me after a few months. I hate to admit it but I think she did. I used to have to prune the roses and I didn’t even do that willingly.

INT: You were a teenager and also you had gone through so much getting there. I think it must have been quite a contrast to be one minute involved in really survival techniques and the next minute you’re meant to go back to being a boy of that age.

BK: A boy, exactly. They had a little girl of three and I also had to help look after her. There was a nanny. I mean the household was incredibly wealthy, incredibly wealthy. The house was in… overlooking Hampstead Heath – near Bishops Avenue.

BK: In Wildwood Road I think it was called. It was a stupendous house. The view was over the Heath and for my part it was wonderful. I had a room to myself with shelves and shelves of books. I like reading, I did even then. So I was quite happy except for the roses.

And I was learning my English. I must have been a pain in the tonsils. Anyway eventually she got me a job and that meant the end of the Woburn House job.

BK: And I was sent to this farm in Berkshire. And that was a poultry farm. Now I must tell you right here; I hate chickens. I hate them with a proud and dying devotion. I loathe them because of that job. It was this, it was a sixteen acre farm on a very steep slope and most of the damned chickens were at the top and we lived at the bottom. In those days I had shoulders. I used to carry these hundred weight bags of grain or feed or whatever up the hill, feed those loathsome animals.

By that time I would have killed them gladly. We kept on going like that – that was my life. Carrying feed up, coming back down, maybe feed the horse, whatever there was. I’m not a farm person. Not an animal person so it wasn’t great. I was alright with them, I did well and Mr. Hundleby (would you believe that name – Hundleby?), the farmer, took me aside one day, by which time I was managing pretty well I think and he said ‘You have been a good boy Bert’. They called me Bert. ‘We are going to give you a rise from your half crown a week. We’re going to put you up to a pound a week’. I thought, my God I’m a millionaire! I’m a millionaire!

INT: That’s quite a jump.

BK: ‘But we’re going to deduct fifteen shillings for board and lodgings’.

BK: Five shillings. But the life was good there. I just loathed the chickens. There was an incident… The farmer had acquired some wonderful cockerels, a special breed, and he was very proud of those things and I was told to move them from one pen to another. You can carry four at a time if you do it the right way and I must have damaged one of them. It was lame and I was terrified that I had done this damage. That’s something I should have mentioned – I was living with fear all the time.

I never lost my fear from Italy and so I wouldn’t even ask a copper for directions. I was terrified of most things. So I’ve damaged this bird and I don’t want to tell the farmer so I took it to a shed and thumped it over the head with a hammer. A good thump on the head and put it in an overturned water bucket and left it. That night was a night of nightmares like I’ve never had before or since. I seem to remember hearing fire engines and police and God knows what coming after me. I’m sure that’s imagination but that’s what I remember. Anyway, the next morning I went to inspect the damage and the damned thing was still alive so I gave it the thumping-over-the-head procedure again and this time it was dead.

Unfortunately the farmer had a dog and the dog kept sniffing around the bird. I tell you, the experience of the farm was not great except I was well fed.

And then my mother, as I told you, had in the mean time arrived in Britain and she’d gone to join our family in Nottingham. You know, with refugees there tends to be a clustering.

BK: And our cluster was in Nottingham. My uncle was there, my aunt Gina and the cousins and so on. So she went to stay with them and then when she felt that I’d had enough of the farm she got me out of there and took me to Nottingham. 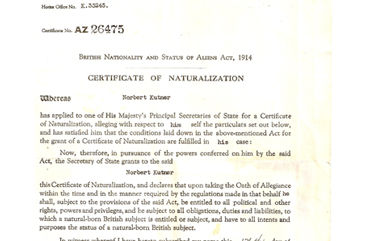 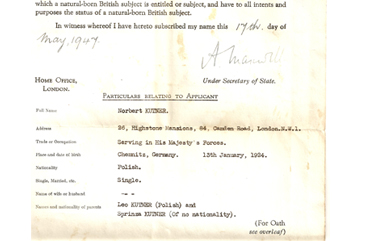 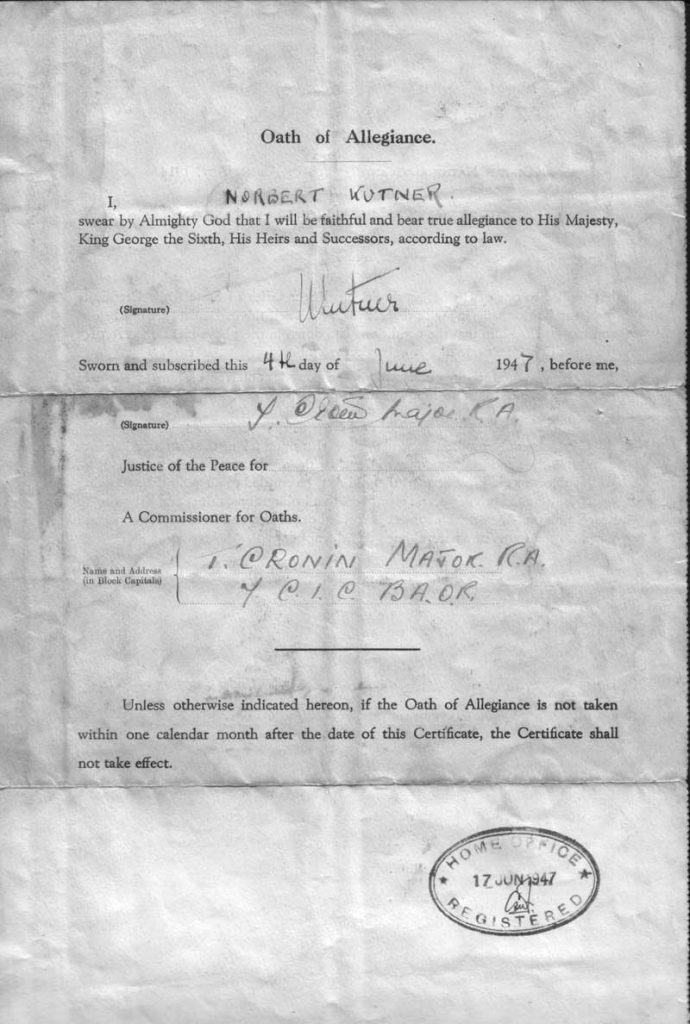