INT1: One last question really about your time in Scotland. What were the high and lows for you? Obviously you got married, you had children

BK: Yes. Well, obviously getting married was a high

BK: Yeah, and one boy and one girl. A reverse order, one girl and one boy. Yeah.

INT1: And did you get involved with working with the Jewish community? In a voluntary way? I I know you do now, but did you always do that…

BK: In those days no. I had I had no understanding of that even. I suppose like a lot of immigrants, we were concerned looking after ourselves and getting ourselves established.

And I wasn’t even… re… remotely concerned with Jewish problems, except I tried to find a synagogue fairly soon. Make, let, make it clear I’m not very religious, but you have to have a synagogue. And partly though that I met some people as well of course

INT1: But, later didn’t, you were very involved with drama?

BK: Avrom Greenbaum Players, where my wife was one of the leading ladies. But because I have no talent I went on the management side. I was the chairman quite a while in it. That was a fantastic time. For Glasgow, young people all together, I think the Avrom Greenbaum Players did wonders to drawing the community together both in terms of spectators and workers. It really was, you are all too young to know about it. But it was quite fantastic

INT1: It is, It’s a shame that the community is not big enough really now I think to sustain that is it?

INT1: Would you say that that Judaism has been significant in your life?

BK: Totally. Totally. Um, now anyways, to me it’s all about being Jewish, but it’s always been… the persecution, the running away, the persecution, the running away, and then coming to this lovely Jewish community. Which was and is a lovely Jewish community. And very supportive of me. Not in the sense of charity, but in the sense of being supportive and kind and helpful, yes

INT1: Remind me what your books called Bob, because I’m sure…

INT2: Over My Shoulder

BK and INT1: Over My Shoulder

INT1: And why is it called Over My Shoulder?

BK: … what I’m doing with you just now 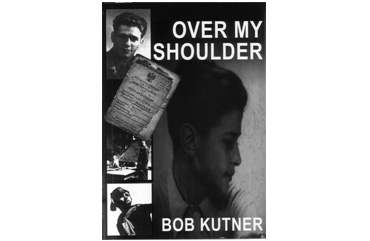