George describes his life in Glasgow and speaks about meeting his wife.

INT: Ok. So you arrive in 28 Abbotstford Place and did you stay there when you came? With your mum?

G.T: Yes, I stayed there for a bit. I was in Glasgow maybe one or two weeks and they arranged a job for me at a Jewish firm, Berman Brothers in Ritchie Street. It was only recently that they pulled the building down. It was a furniture place making hold ups and you made tables and things like that and I worked there for a wee while because I could converse with them –they spoke Yiddish. There were three brothers and I worked with them for a while.

INT: So what did you think of Scotland when you came? You were brought up in a small town.

G.T: Oh it was completely different. Tea with milk in it, was never heard of. Lemon tea yes but never milk! When you came to Britain you looked out the window on the train and I always remember a lot of green fields. It was amazing how quickly I picked up the language.

G.T: Oh yes, I joined the Maccabi. I was in the Maccabi in Germany in Konigsberg because I enjoyed my sports in the schools.

INT: Whereabouts was the Maccabi in Glasgow?

G.T: Turriff Street. I’ve still got the original badge and photographs. Norrie, my pal, has got a few photographs of the Maccabi. It was just a wooden hut.

INT: Was it next to the Talmud Torah?

G.T: Yes. Next to Talmud Torah.

G.T: It was just a wooden hut. I had a great time. I used to go there about two or three times a week and we had a gym team and we used to give displays.

INT: So who was your pal?

G.T: Well there was Laurie Sless, Harry Matavski who owns the tyre place and Fieldman, Abe Fieldman, the young dentist; he died when he was only in his twenties. Ellis was the instructor who had been an instructor in the army and when he came out he took the class. He was a very fit powerful guy, went to the dancing in the Plaza and just died. Unbelievable, he was so fit.

INT: So how long did you stay in Abbotsford Place? Did your mum ever move on to get her own place?

INT: And where did you stay then?

G.T: I didn’t go to it although we stayed across the road.

INT: But also during the war obviously you mixed with non-Jewish people as well. Did you feel self-conscious about speaking with a German accent and people being aware of this?

G.T: No. There was no problem.

INT: Were you still working in the same place when the war ended?

G.T: I was driving for a haulage contractor but I don’t remember details about it.

INT: When the war ended was there still family left in Europe?

INT: Did you know what had happened to them?

G.T: Yes. I remember when my mother mentioned that she had got a note to say that my father had been killed in Dachau. It stuck in my mind. He had been in the German army in WW1. Any of that business I left to my mother.

INT: Where did you meet your wife? In the refugee club?

INT: And what was your wife’s name?

INT: Was the refugee club open to anyone?

G.T: Yes anybody. A lot of communist people used to go up there. It was a place to go to. The cafes shut at nine, half past nine. So did the pubs actually.

INT: And what time was the refugee club open until?

G.T: Well when we came out of the Locarno, it was still open at eleven o’clock. My wife’s mother was in the kitchen making the tea and that. My wife, was only fifteen (she told me a lie, she said she was eighteen) – never told me the truth since!

INT: And when did you get married?

INT: When you were in the Territorial Army did you ever encounter anti-Semitism?

G.T: Oh yes. When we were in Germany and I was driving the truck and had some boys with me. The boy said, “We need fags, c’mon in the pub.” We took bits out of the engine so they couldn’t steal the vehicle.

The boys went in, I parked the truck and I walked in and there were two young German boys sitting at the bar. I could hear them slagging the British Army. They didn’t know I heard them so I went behind them and said in German, “Look, we’ve beaten you twice in the war so shut up!” There were certain places in the town, you were not allowed to go to. They were still running about with jackboots and all that.

Links to Other Testimonies by George Taylor 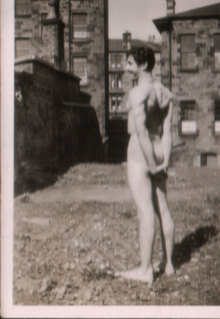 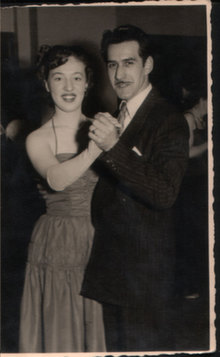