Ike relates his experiences as a King’s Scout and taking part in the Coronation celebrations. He describes his life during National Service.

IG: I can remember the huge celebrations in the Main Street in St. Ives but beyond that nothing really. And then May absolutely wanted me to go on to the 6th Form and I absolutely wanted to leave and get, earn some money.

INT: So what happened to the evacuees from London?

IG: They all went back.

INT: Was it a sad day when they went back?

But May insisted I stay onto the 6th Form and so despite the fact that I’m a renowned chatterbox I didn’t speak to her for a whole term, I was so cross. But she made me go on to 6th Form and, in the grammar school, and it was the first time I’d actually enjoyed school at all.

The only problem was they made me take three subjects and they’d timetabled it so that you couldn’t take maths and biology and chemistry. If you wanted to take biology and chemistry you couldn’t take maths, you had to take physics and, frankly, advanced level physics without advanced level maths, you’d be talking Chinese, it just didn’t make any sense at all.

And after four terms copying my friends homework I got the headmaster to allow me to drop it, so I only took two subjects at A Level and only passed one. I passed biology and failed the chemistry.

INT: But…Did you feel different because you’d left Germany and…?

IG: Not at all. I mean I’d been in May Wiles house for quite a number of years then, gone to the local chapel, gone to the Scouts, I was, I was just a normal lad.

INT: And how was Esther?

IG: She stayed with May Wiles after four years of private schools and then she decided she would go into nursing and chose not to go to the local nursing school. She went to a nursing school in Nuneaton whereas I stayed on.

INT: What year was this?

INT: How old were you?

IG: I was fifteen when I went into the senior Scouts.

IG: So we could work it out but…

IG: Yeah, something like that. And he was a sea…He got us all to become sea Scouts and then he encouraged us to collect badges, the scout badges, and eventually I, and two or three others, got enough badges to be awarded the King Scout award.

And then the King died so we became the UK’s first Queen Scouts and there was one interesting little thing which until recently I had totally forgotten. The Queen and the whole court went into mourning, black clothes, and she performed one royal function before the coronation because she thought her father would have wanted her to, which was to take the salute of the new, as they were then, Queen’s Scouts.

And then the next morning we got into a sort of column and marched past the Queen and her royal party, who were in the grounds of Windsor Castle, and we marched into St George’s Chapel to a service of thanksgiving and commemoration.

And I’d totally forgotten that until the Queen’s celebrations and even my daughter hadn’t heard that story.

INT: Yeah. So did you see yourself on TV?

IG: I don’t recall that.

IG: But my daughter, very good with the internet, she immediately sent to the Boy Scouts Association and asked them for any pictures they had of the event and we’ve got four pictures on the computer now and one of them is the front of the parade going past the Queen and I’m pretty sure one of the people you can see is me. My daughter thinks it’s me as well, we’re not quite sure but we think it’s me.

IG: When I wanted to go into an agricultural college, because I’d moved house and because I hadn’t got a foreign language at O-Level, at School Certificate level, that means I couldn’t go for a degree course, goodness knows why. So they put me down to a diploma course at what’s really the second best school of agriculture or dairying in the country. Sutton Bonington School of Agriculture.

And we then moved to Suffolk, to Balaton Lodge, and I applied for a grant and of course grants for diploma courses weren’t obligatory anyway and as I’d just moved counties they weren’t interested.

So I had to give up the idea of agricultural college.

And then I did something very, very strange, I thought, well, all my school friends are going off to National Service, because I’m not ‘British’ I’m not being called up. And if I’d stayed ‘Not British’ until I was twenty-six I wouldn’t have been called up.

But at nineteen I went along and got naturalised so that I was British and changed my name to Gibson. Which was the married man who…

So I must have been National Services only volunteer!

And I went into the National Service and I wanted to be a pilot on the principal that I could then be a pilot in Civvy Street. So they sent me and fourteen other youngsters to Hornchurch where we had four days of selection for pilot.

INT: They gave you a choice? They actually allowed you to do that?

IG: I couldn’t, I can’t remember why they allowed me to go to Hornchurch. But I went to Hornchurch and we had four days of selection and at the end of it they lined the fifteen of us up and said ‘Well you two have been awarded pilot, National Service, you two have been awarded air signaller if you sign on for eight years without a commission, and the rest of you have been offered nothing. And I was offered the air signaller and I thought without the commission…Air signaller, no civilian job like it, no thanks.

So they sent me back to the square bashing camp and there they put me in the kitchen for three weeks which meant I ate better than anybody else on the camp because you picked the food before it went out. And then they sent me to Middle Wallop to train as a fighter plotter.

And three quarters of the way through the training they said ‘Where would you like to be posted?’ and I thought oh this is good so I said ‘East Anglia or alternatively the Far East because I’ll never be able to afford to go there on my own’. So they, of course, posted me to North Yorkshire!

INT: Where was that? Was it near York?

IG: It was near York, about 6 or 7 miles from York and we went to this huge underground complex and the amazing thing was anybody watching the coaches coming out of RAF Linton-on-Ouse could have seen 60 young men get out of the coaches and all walk into a building the size of an ordinary house.

We would frankly have had to stand on each others shoulders and, but even when they got to know you, you would have had to wave your security pass because it was secret for us.

Then you went down some steps and into a long 12 foot wide, or thereabouts, corridor which sloped downwards until you got to the operation centre which was three stories all underground, horseshoe shaped with all the horseshoe… with officers who did the aircraft controlling and in the middle of the horseshoe was this massive picture of the British Isles where you did the plotting to show where the planes were and then the screen in front had the weather, which planes were flying and all such information.

And then amongst the officers rooms there was also a direction finding unit which you went to sometimes, where a plane would call out ‘Fix Fix Fix’ and he be in direct line to one of the 10 people or so sitting around this table and there would be 4 or 5 people who would get this call ‘Fix Fix Fix’ and you would actually pull out a string which showed the direction the plane was in and where the string crossed showed you where this plane was

IG: And this was passed to the officers and they would then tell the plane where he was.

INT: Did you enjoy National Service?

IG: Some of it, but the thing about it is at Shipton, we worked morning one day and afternoon the next and if you were working in the morning and the planes flew in the evenings, which wasn’t that often, then the morning shift would get called on again to man the operations centre.

So we had an enormous amount of spare time. And, I mean, I had been taught more or less from the Baptist folks that playing cards were part of the devil. In that camp we played three card blind brag for pennies, we’d not got much money, five nights a week because we were so bored and then on Saturday nights I fetched my lovely bike up from Newmarket and I’d had it, what, 7/8 years by then, maybe even more whatever…I hadn’t calculated how long I had it but I brought it up on the train then on Saturday night the last bus from York to the camp was about 10 o’clock which was pretty useless to a 19 year old.

So, I used to cycle the 10 miles into York, go to a dance at the De Grey Rooms and then cycle back around midnight and that was OK, I enjoyed that bit.

INT: How long was National Service?

IG: 2 years and when you got out and you were all in your civvies and you were just about to leave the camp you always had to go sit in front of the group captain who was the camp commander and he, well, it was a long table, I suspect it was the officers mess table.

He asked me the usual question and I said ‘The first few months when we were training that was alright, the rest of it was a complete waste of time’ and instead of being offended the group captain got up from his end of the table, walked the length of the table, shook my hand vigorously and agreed with me completely. So I was very pleased I had actually come out with the right thing. 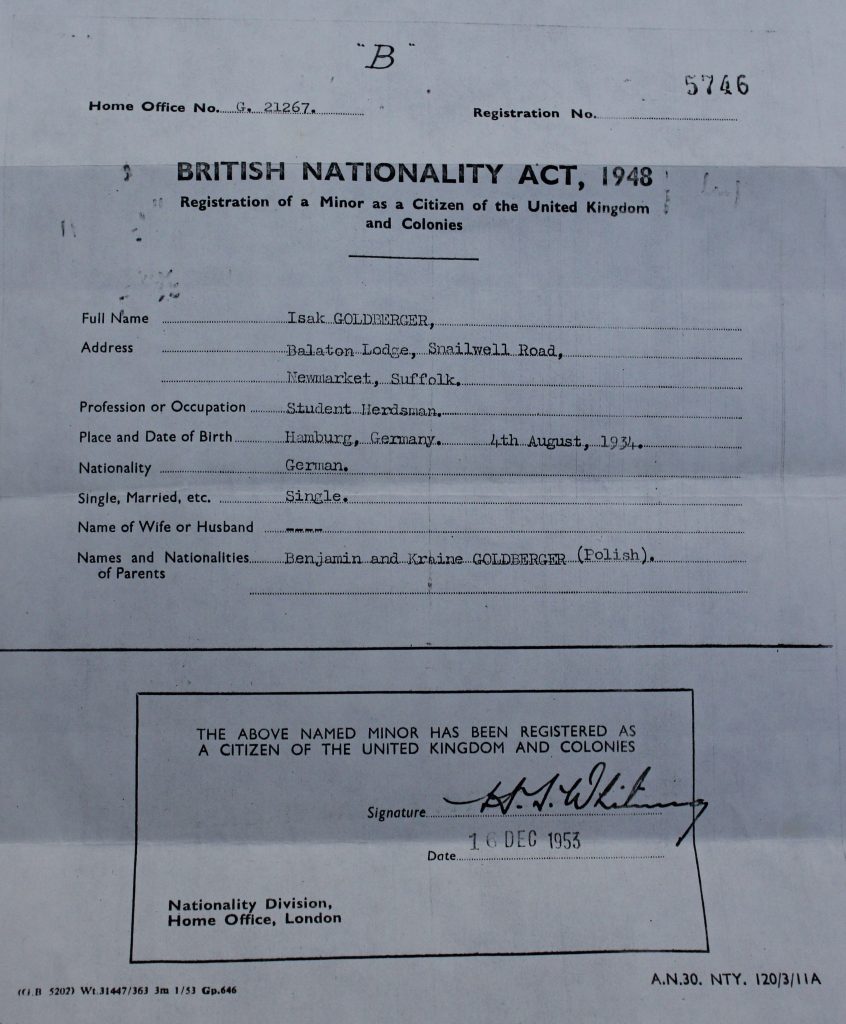