INT: Today is the 26th of July 2013 and we’re here to interview Leo Metzstein. Leo, can I begin by asking you when you were born? Where were you born? And were you always called Leo Metzstein?

LM: Yes I was born on the 27th of July 1932 in Berlin and I was always named Leo Metzstein, no question about that. I can’t think of anything else to tell you other than the street I was born, but that’s not important. But we did live around the corner from a Nazi pub which was actually quite good. We lived in a basement what we people would call ‘garden flats’ but it was a basement no question about it. And that indirectly, I think, saved our lives, maybe not our lives so much, but it saved us being harassed by gangs because we went downstairs into our house. We were not a main door, off the road where you would stand and have to open with a key. We actually walked down steps into a basement. So that’s where we were born.

INT: And why was it good for you that there was a Nazi pub nearby?

LM: Well it’s kept the… as far as my mother used to say there was a Nazi pub round the corner where they congregated and I think the amount of drink that was going on and everything they would just disappear after their drinking and disappear to their own homes. It was a meeting place for them I would think. But remember I was only, at that time I was one, in ’32 I was born, by the time 1933 came along one, and ’39 I was 6. But I was just hearing stories and seeing things. It’s nothing much.

INT: And were you an only child?

LM: No, no I was one of five. There are two girls and three boys; and my sister Liebe, who changed her name to Lee, went to America. My brother Joseph, he just changed it to Joe, which was quite normal. There were the twins, Isi and Jenny were twins. And I was the last one, there was four years between Isi and Jenny and I and that was 1932 when I was born.

INT: You were of course very young when the Nazis gained power. Do you have any memories from that period before you came here to Scotland?

LM: I do have memories. I would think, I went to school, I suppose at the time you would be just walking the streets, I’m not, I don’t think people were as, as concerned about paedophiles as they seem to be today. But I remember walking the streets and going to school myself, and also running home from school because my mother said “don’t walk, just when you, when you go anywhere, just run. You don’t want to be observed by anybody”. But according to my mother I was blonde and blue eyed and I wasn’t going to be taken for a dark, Jewish styled person like my brothers were. They were dark and very obviously, I would think, Jewish. I don’t remember much, except; I have a vague memory somewhere in the back of my head about parades, flags but that would just be seen. I don’t think they were in our street so much, it would be in the main roads. We lived in Blumenstraße which was quite a main road at the time but I don’t think there would be many parades up and down I would say. Anyway if there was a parade I would probably sneak out to see it and then I’d be pulled back, I wouldn’t be allowed to wander the streets.

INT: Was it the local primary school you went to? Or was it…

LM: It was a Jewish school I believe and there was, they finally burned the school down I believe and then they opened, partially, a bit of it so I may have gone back to school for a little while.

INT: And it was the Nazis who burned it down then?

LM: Oh yes, it was all part of 1939 Kristallnacht, this and that. They decided that Jewish schools were not necessary, Jewish people were not necessary so why give them special schools? But I believe, hearing from my brothers, that they did open up one or two others, maybe they just felt difficult, I think they felt guilty, but I think they, they opened up a few schools.

INT: And you obviously managed to escape, what happened? How did you get here?

LM: Oh that’s a long story which neither of my sisters or my mother or anybody really talked about but it was a fairly organised arrangement which we didn’t realise. And my sister only heard about it either at work or when she was with other girls that one day, there’s a lot of things going on about Jewish people, Jewish children, ten thousand children are going to be allowed. This is a very strange thing, allowed, I didn’t think we were stopped from going anywhere, but suddenly ‘allowed’ to leave Germany.

INT: And this was as part of the Kindertransport?

LM: Yes. My sister came back apparently from the house, although she was very slow with any information and so was my mother, they just never spoke about anything. But apparently I heard later that she heard that you have to go somewhere and, and present yourself and say who is there that’s under 17 or under 16, who’s over six? And this all happened, I was still only 4, 5, 6 years old and I didn’t hear till later that that’s what happened. You were to go somewhere, get a form, someone will deal with the Jewish Refugee Committee, the Quakers the…I honestly don’t know and my sister was not very forthcoming with information. But, she was fifteen, she organised the whole thing to the point where if my mother hadn’t moved, which was the case, my mother was very slow in thinking that anything would ever happen; “No they’re friends of ours” she would say, “Look Mr thingummy across the road, he knows us well”. And my sister said “If you don’t move yourself, I’m killing myself”. And she would have, she would have, she was going to throw herself off a bridge she told me.

INT: So she understood how dangerous things were?

LM: At fourteen or fifteen she understood everything but she never spoke about it. The main thing was to get three of us ready. Joe was already past the age where he could go to Kindertransport, or verging on the age, and he had to get smuggled out. He was told one day “come to ‘so and so’ and ‘so and so'” with a wee bundle, bit of bread or something and he got on the train and he went through. But Isi, Jenny and I were different. We were registered below 17 and there was a lot of work to get us out of Berlin. All sorts of committees must have been involved, you had to make sure that my mother didn’t owe any taxes or, or rent or, and finally it was a horrendous departure, I just…

INT: And your father, was he deceased by this time?

LM: My father was, I reckon he was instrumental because there was a lot of Communist Jewish people around Berlin at the time. He may have been a Communist, he may have talked in places, I don’t know. All we know is that he was 35 when he was found in a field and obviously had tried to escape gangs or, or being harassed. He was a very Jewish looking and he…probably anti Nazi of course, being Jewish he would see what was going on. But this was already 1933 and he was killed, I say “killed” in inverted commas, he was, couldn’t go home. He wouldn’t go home because they were watching everything apparently, that was already 1933. People don’t believe that 1933 it started but apparently as soon as Hitler became Chancellor everything changed. People were being hit in the street and harassed and even imprisoned. I think they even started certain concentration camps just to get people out of the cities. And at 35 he was found in a field, went to the hospital, and my brother has got conflicting reports of what he told me or my sister told me; he had an allergy of some description. He was found in a field, taken to hospital, and died. Aged 35.

INT: So you think probably they pretended he’d had an allergic reaction? And that was an excuse?

LM: It’s a very strange thing in 1935 to talk about allergies and you know, you don’t, we didn’t know about these things a lot of the time but he certainly was… He may have had a cough, I don’t know, but it wouldn’t do him any good sitting in a field, not eating, you know. And he would come to the window, definitely my mother told me this. He would come to the window, knock at the window, she would give him some bread or something and he’d be away. So I don’t remember him because I was just one when he died.

INT: So, if your father was in hiding, what income was coming into the house? How did your mother cope?

LM: Well that’s a good question because the only way I think she could have coped would be to get social security and at that time the lorries would come round, I don’t know how it was arranged, but the lorries would come round and pick up all the Jewish women in the streets, wherever it was and they would go to hospitals and hostels and prisons and peeling potatoes, washing. And I think that is the way she got money because my mother, my father had no money. He was a handler like Steptoe and Son. We had a horse and cart and so I don’t know where she would get her money. Never explained, my mother never explained anything, never told. Maybe I didn’t ask the right questions.

INT: Maybe it was too difficult for her to remember?

LM: Yes and too painful to remember what happened. The people were just treated very badly but in the same time we must have had enough food to eat and she worked hard probably to earn a few pennies.

INT: So she sent three of you out as part of the Kindertransport. Did she manage to escape as well?

LM: Yes she managed to escape but it was a very similar arrangement as to the, to the children’s transport except you had to have a sponsor. And in this particular case it was a family in Dorset who decided that they, I think their reasons were much more honourable than just wanting a cook and a maid. I think they wanted to save a couple of people. So there must have been some sort of organisation in Berlin or certainly in Britain to say ‘look, there are other people out there, can you take…?’ and they did, they took my mother as a cook and my sister as a maid and they stayed, they got taken over. At that time I think we had to have a £50 guarantee as children but I don’t know what they gave for my mother and sister. All I know is that by the time they came, seven days or so before the war started, August the 20th I think it was, they were safe. So that was all our family were now in Britain and my father of course died in Germany. 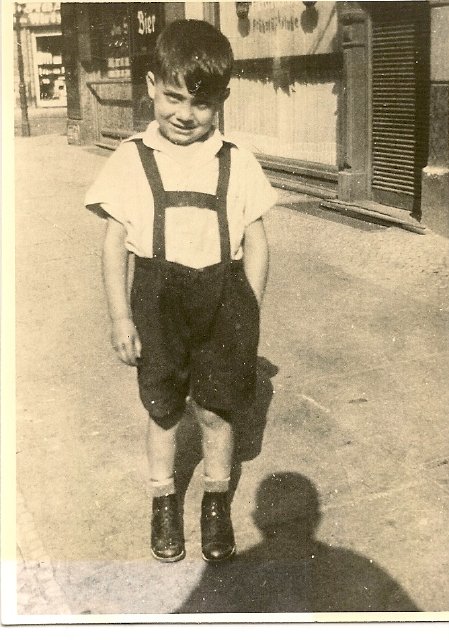 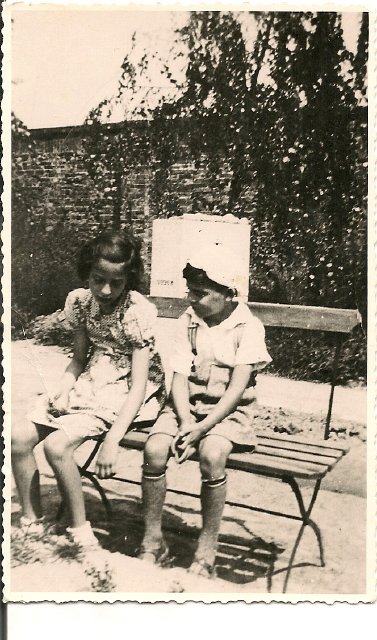 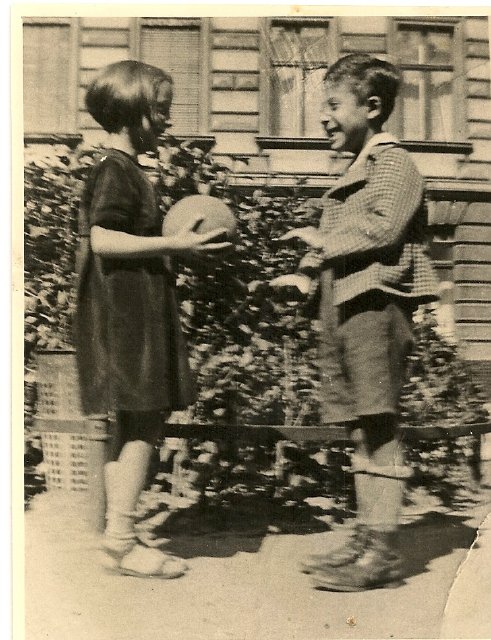 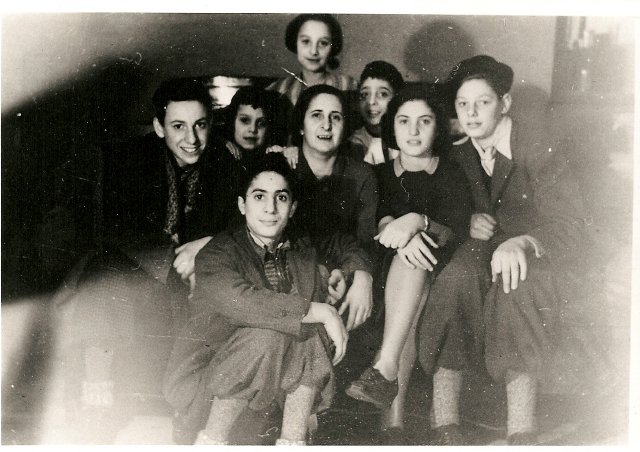 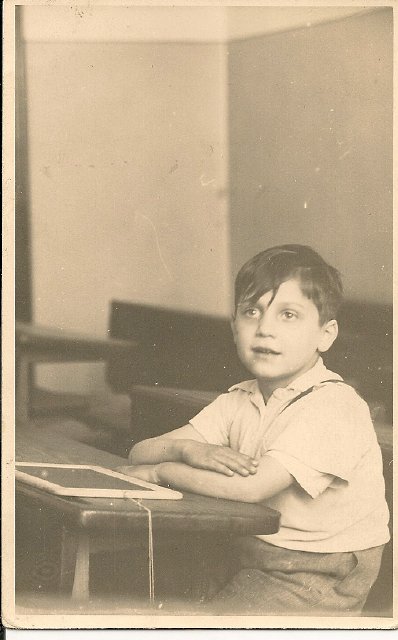