INT: And how did you come? Was it a train and boat or…?

LM: Well yes it was a very strange arrangement. I’d never been out of the street you might say and suddenly we’re told, I remember this my mother said “C’mon, we’re going” and I had a wee parcel or something and my sister Leie and my mother and Jenny. And Jenny and I were the two who were going and I had a wee parcel and it was about 5/6 o’clock in the morning and I remember it because she said; “keep to the… don’t go out onto the pavements, keep to the side of the buildings.” I remember quite distinctly walking through the quiet streets. We get to this massive station, which of course seems huge to me, massive station and the hundreds of people milling around but never getting on to the platform, just standing at the barrier. And then the next thing I remember was, quite vividly, whoever was on the platform taking us I don’t remember that. All I remember, taking Jenny’s hand and we’re walking down the platform and… See it was a big adventure, I mean, you know, my mother would have been, would have been terrorised so she thought to send her child away like that, two children.

INT: And your brother Isi wasn’t with you at that time?

LM: It was Jenny and I who actually just shook hands, took hands and then went on to the train. And, and after that it’s just a huge adventure. The train went through, out of Germany. I remember stopping at some stations maybe, I remember vaguely guards coming on, searching, looking for bits and pieces of anything that you may have tried to sneak out. And then, the next thing, we must have been overnight to Holland. And Holland, all the way through Holland to Hook of Holland and again it must have been an adventure but I’m sure I cried most of the time, and so did Jenny. And then, once again we’re in Holland and suddenly we’re on a boat, again a memory. And then we get to Harwich, and at Harwich again we’re taken off the boat and we go to London. Well, that was another adventure. It was a train, a train, a boat, a train; I mean it was huge.

INT: And of course neither of you spoke any English?

LM: Not a word, not a word. And, the…but an amazing thing happened. My brother Joe who had been secreted out in 1938, or early ’39, was already working in a factory in London. And when, obviously, most people, a lot of people started to get to know about what’s happening in Germany, people were coming in. The foreman knew Joe and spoke to Joe and said; “Joe, go to the station, your brother and sister are coming off the boat or the train”. And lo and behold Joe was standing at the platform waiting for us which was an incredible… I mean for me it was marvellous. And we went for a cup of tea, the most normal thing you do in London, Lyons Corner House. And then the next thing we’re in a hostel somewhere and why were we in the hostel? Because the fare for the rail fare to Glasgow hadn’t arrived. Two weeks we sat in the hostel waiting for £2 each or something. So we’re in the hostel and I don’t remember the hostel except the disinfectant smell, which was just horrible. We must have been looked after quite well. Oh by the way, the Quakers took us onto the platform, that’s got to be mentioned because they were the only people allowed on the platform apparently. No one else.

LM: The Quakers, yes. And then we went by train to Glasgow.

INT: And why Glasgow?

LM: I don’t know except that the two, the families that had taken Isi in earlier lived in Clydebank, and the family that was going to take Jenny lived in Hardgate, which was 20 miles from Glasgow or maybe less. And I was sent to Kilmarnock on my own. So there I was again on a train, with somebody I don’t know. They may have met me in Glasgow, I don’t know. I would think someone must have met me in Glasgow, took me to Kilmarnock. So the point I’m trying to make is that I was separated from five different people at the same, you know one after another each for a few days, a few hours. And then I found myself suddenly in Kilmarnock with a big family; four girls and a boy, mother and father, nice house, nice people. Incidentally, they were conscientious objectors but were also Quakers and they were wonderful to me. And how they took in another child when they already had a full house I don’t know, but obviously they had big hearts.

INT: And were you there for a long time?

LM: I was calculating the other day how long I was there. I arrived in July or August the 4th or 5th or maybe even the 10th. And I remember a Christmas so I must have gone at least 9 months there, 6-9 months. And then 1-2-3, my mother comes to visit once, because she had come up from Dorset. She was very smart my mother, they took her away from Dorset because she, the British thought that she would be signalling submarines on the Channel. So they took aliens away from the Channel and moved them into London and then my mother through the Refugee Committee got a job in Largs.

LM: Correct, she was very smart about that. And Lee stayed in London, my mother cooked in Largs. And, so I was in Kilmarnock for about 8-9 months, learned to speak English, everything, every word. And then my mother came to visit me round about 6…It was after Christmas. And I was frightened of her because she couldn’t speak English and I could no longer speak German. I’d lost everything just like that.

INT: Did it come back?

LM: German is coming back, bits and pieces of things. When I need to know I can do it. When I can listen to the news I can do it. But I was hiding behind the women’s skirts because my mother was a stranger. I mean I hardly knew her in Berlin, I mean I was only… She was out working all the time so I was just growing up. And I hardly knew her when I saw her. It was quite a sad visit. I think it was then my mother decided that I’m taking my child away from here, he’s not going to be Jewish for long because I was already sitting in a big house with a swing and a big garden and we came out of a basement flat, it was, “I’m not going to let my son get used to this”. So she took me away and put me in a hostel for 4 years.

INT: Oh, and you must have been upset by that?

LM: Well, it wasn’t too bad really because Isi and Jenny were also there. The Refugee Committee had decided that there were too many children dispersed round Scotland. So they either bought or rented a big house in Skelmorlie near Largs and they managed to bring a lot of children including my sister, Isi, and Jenny and myself to Skelmorlie, where we lived more or less the duration of the war.

INT: And who looked after you there? Did they have special staff looking after you? Or…?

LM: Well I wouldn’t call them staff, I would call them… They were terrible to us, they didn’t treat us terribly well. The food that they gave us was virtually non-existent although there was money, plenty money but we didn’t see much of it. And my sister Jenny, who has just gone back to New York, although she won’t talk about it either, she said the food was terrible, terrible. But I don’t know, we were, we were alive. It didn’t, it didn’t really matter the food wasn’t special, it was food and they looked after us for about 3 and a half/4 years. And then we were sent away from there, the WAFS…

INT: I was just going to ask, when you were all living together, so would they send you all en masse to the local school?

INT: Or did someone come and teach you?

INT: So it just depended on your age where you went?

LM: Correct. And they were bussed to Greenock every morning and back at night as far as I remember. We went to the local school.

INT: How many children would you say were living in the hostel?

LM: About, I believe it was about 30. And they had come from all over Europe apparently, they weren’t all from Berlin. And girls were kept separate from the boys, I’m not so sure how long for in the evenings but they certainly were sleeping separately. But it was packed, the house was busy, busy. And I had no recollections of the house but a friend of mine recently sent me some photographs of Birkenward which was quite unusual, suddenly to see the house, a beautiful sandstone building. And we’ve been there but the wall, I don’t know if there was a wall in the garden, but when I saw it I remember me swinging in the garden. And they had nasturtiums in the garden, which I hate.

INT: And did your mother come and visit you there?

LM: My mother had this job in Largs, she was very, very clever. And she used to walk or get a bus from Largs which was 5 miles and she used to hide round the bushes. You weren’t allowed to visit all the time. You couldn’t just suddenly bring up your parents at different times. My mother sneaked in and she would come, go to the gate, maybe hide behind a bush and someone, she would say to somebody walking ‘I’m here’ …..and we would go and she would give us a piece of bread, sweet and sour bread or something which she had and then she was away. But there was no formal visits like, How are my children doing here? Like you would, like teachers, going to see a teacher’s night.

INT: And they probably were worried if they let parents come too often that you’d get…

INT: A willing, desirous of leaving.

LM: Well their idea I think was to keep us safe and together. That must have been what the, what the Refugee Committee said. “This is what your job is, keep them here”, but the strange thing is we were right on the flight path of all the bombers going to Clydebank so it really wasn’t that safe. But on the other hand it was safe, we were safe. 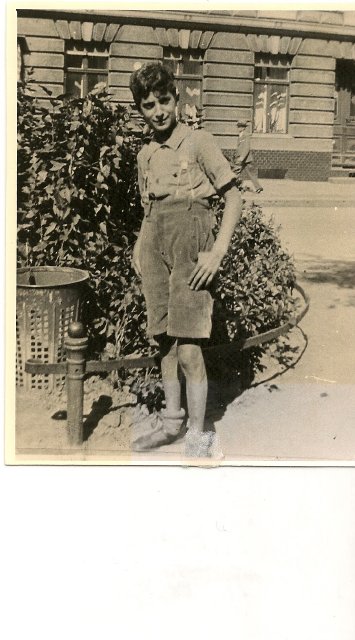