Marianne describes her first jobs. Then she goes on to talk about arriving in Edinburgh where her three children were born. She explains that she loved Edinburgh from the start and thought it was ‘something out of this world’. She talks about the historic links between Scotland and Hungary and her children’s integration into Scottish society, despite their Hungarian surname.

INT: Did you go out to work?

ML: I was working, yes I was first off… at different works. At one stage I got a job at Stoke Mandeville Hospital as an auxiliary nurse. It was very interesting because my English wasn’t very good and the nurses hated me because I couldn’t speak to them and they asked me always to do all the dirty jobs that I wasn’t supposed to be doing, that was supposed to be her job, their job…they asked me to do it. So it wasn’t a very nice experience. Anyway, after my husband got a job and we moved to another place so I left that and moved and got another job. I got a job in Chertsey in a porcelain factory in the research department and I got a job there as a technician.

And then, and then we moved to London and then my husband was doing his PhD. I had a job at the head office of Sainsbury’s in the office. That was quite a good job. And after that another job at Barclay…what was the name of…it’s another big factory/big place…packing something. Again I got a job in the lab testing the papers or whatever.

Anyway, after my husband got a job in Edinburgh we moved up to Edinburgh. And then…came up and we got a bungalow, bought a bungalow in one part of Edinburgh and got a mortgage. And then my children started, my family started and then the house/bungalow was too small so we moved to a bigger house, where I am still living in the same house on my own because since then my children have all grown up and they are all away and I am on my own, and my husband died as well. And that’s it. And I liked in Edinburgh and I like it in Scotland.

ML: I loved it. It was beautiful. I really loved it because the part where I come from in Hungary is a plain; there is no mountain, no river, no nothing…just plain, that part of Hungary where I come from. And the first time when I saw the hills Arthur’s Seat or the Pentlands or Portobello, the sea…it was just something out of this world. It was to me. I liked it very much and I liked the Scottish people because I noticed that their customs are very similar to the Hungarian customs and I couldn’t make out why is that. They had the haggis and we also had the haggis as well.

ML: Haggis yes and all that sort of thing. And then later I discovered that actually we have a connection, the Hungarians and the Scots, because Queen Margaret of Scotland grew up in St Stephen’s household who was a Hungarian King. And this Queen Margaret and her brother, who was English, they had to escape, as refugees, they went to Hungary and they grew up and learned and were educated in the St Stephen’s household in Hungary. And I thought maybe, I believe she brought in the Christianity to Scotland, or so I believe – I don’t know. And then maybe their customs originated from this time. So I loved Scotland; I loved the custom of Scotland and I liked the scenery in Scotland – it’s lovely; it’s nice.

INT: Did you find the people friendly?

ML: Some people very, very friendly but I found there is another type of people, especially in Edinburgh they are very clannish and they couldn’t forgive me that I am a foreigner, and they behaved accordingly. But then I got used to it. I used to be bothered about it but then I got used to it and I don’t even notice it anymore. But you can’t change people, that’s it.

INT: So, you brought up… tell me a bit about your family. What children you have?

ML: Well, I have three children. Well I am Jewish but I am not a ‘so called’ very practising Jew, I’m sort of half/half. I’m pretty open-minded and I have a lot of non-Jewish friends as well. But I have found a lot of people who are not very sincere and I don’t like that.

INT: You have three sons?

ML: I have three sons and they were all born and bred and educated in Edinburgh and then went to the Aberdeen University and Dundee and St Andrews University and Napier in Edinburgh. So all three of them are educated and graduated and they all have good jobs, they are all working. Unfortunately they are working down in England because it was very difficult for them to find a job in Scotland.

ML: And they… I suggested to them to change their name but, no, they keep their Hungarian name and I remember my first son, in the Primary School there was a school exchange with France and a group of French children came to Scotland, to Edinburgh and a group of children from the school, from Edinburgh, went to France.

And then I kitted out my son with a kilt and then when the holiday was over, the trip was over, they came home and they had brought me a newspaper cutting of a French newspaper where it says, with a picture, with a photograph that my son Andrew Lazlo is representing the Scottish, a school of Scottish children in France. So that was my son with a Hungarian name with a kilt representing Scotland in France.

Links to Other Testimonies by Marianne Lazlo 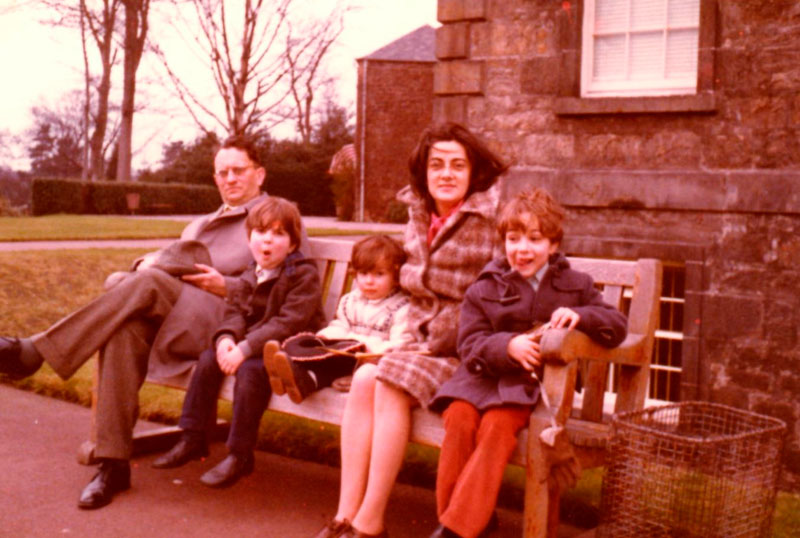