INT: So, eventually you had to leave, of course, Czechoslovakia as well?

RM: Yes, well with the annexation of the Sudetenland.

INT: So they went into the Sudetenland in October ’38?

RM: I’ve no idea of, you know, of the date. But then the students rioted, sorry, at the Prague University, the Charles University, and my father was advised not to come and lecture in German. So he was without work, but his association with Einstein…he started writing to various people that he knew, and one of them was Sir Arthur Eddington. Both my father/uncle’s expeditions were clouded over, but Eddington was the first one to get a result, so they were in correspondence. In fact after the First World War when Eddington came to Germany to meet Einstein, my uncle/adoptive father was there as a ‘Dolmetscher’, you know, a translator.

So he wrote to various people he knew, Eddington amongst them, and Eddington said, strangely, there was a vacancy in St Andrews in Scotland and my father, my uncle… father/uncle, what do you want me to call him?

INT: I think call him your father; it’s easier.

RM: Call him my father, right. He said he was on a lecture tour in Holland so he could easily come over to be interviewed. So he was interviewed with, incidentally also the help of the Astronomer Royal, and that’s another story. He was interviewed by the Principal of St Andrews University on, literally, the day the Nazis rolled into Prague.

INT: He must have been very worried.

INT: So how did they manage that?

RM: Well, there was a lecturer in the Department of German, at St Andrews University, who happened, just happened to be in London doing his own research. So his wife sent a telegram. Sorry, I should mention this man, Lawrie Wardale, who I refer to as ‘My Scarlet Pimpernel’.

INT: Just like the Scarlet Pimpernel he managed to whisk you out of Prague, did he?

RM: Yes, well his wife sent him a telegram saying, “Can you fetch Family Freundlich, expenses paid?”. So my father went hot foot on the night train down to London armed with money and all sorts of addresses and things and there is a very amusing… well, may I digress again?

RM: Yes, so it just said’ Carol Dawbarn, Cumbria’. So I was, at that point; separated, footloose, fancy free, so I rang directory enquiries and said, “Can you give me a number for Dawbarn?” I said, “It’s all I have – Sedbergh or Cumbria”. And within seconds the man said, “Shall I put you through?” I said “No, no, no, just give me the number and I’ll do it”. So I rang Carol… “Renate”.

“Renate?” So she said she wasn’t well, but I was footloose and fancy free so she said, “Come and see me”. So I came within a couple of days, drove down, and I was hardly inside the door when she gave me a rather grubby manila file in which was the entire correspondence between her father and her mother back in St Andrews – the telegrams – and she said, although she now had grandchildren, this wasn’t her story. She gave it to me and it’s…

RM: …absolutely amazing, what’s in that.

INT: Absolutely amazing. So, what did he do? How did he get you out? Did he take a plane to Prague then to rescue you?

RM: Well first of all, obviously, he had to go, I think, to the German Embassy and get permission to go because my father didn’t dare go in. And Lawrie said, while he was sitting waiting, he could see my father pacing up and down because… say it was an ordinary sort of office with half obscured windows, well half glazed, you know, and all he could see was my father’s hat walking backwards and forwards. And, oh he’d been given a letter dated, I think, the 18th of March.

RM: By the Principal of the University [Sir James Colquhoun Irvine] 18th March, saying… may I? “This is to certify that Professor Dr. Erwin Finlay Freundlich, formerly of Prague, has been appointed to be Napier Lecturer in Astronomy and Director of the Astronomical Observatory. The appointment is approved by the Home Office, which has given permission to Professor Freundlich together with his wife and two children to reside in Great Britain.

Doctor Freundlich is already in this country and it is requested that every facility be given to his wife and family to proceed to St Andrews to join him.”

So armed with that letter… (It was very unfortunate that both Lawrie Wardale and his wife would just write… they wouldn’t put dates on their letters, just ‘Tuesday’ or ‘Friday’. And he wrote a great big long letter.)

It took him quite several days until he got to Prague. I know he flew from Croydon to… I’d have to look it all up and tell you.

INT: It was certainly a very dangerous journey I think, and very brave.

INT: And of course there weren’t passenger flights in those days.

RM: Well there were passenger flights until the very last minute. Once Lawrie had…

RM: Yes, to come back [refer again] to Turkey. Some of Erwin’s problems in Turkey were – he wanted to get some of his equipment for his observatory from Britain and the Turks didn’t want this. The Turks had been in with the Germans but Atatürk was clever enough to entice, you know, the Jewish people that wanted to emigrate to them. But, anyway, Erwin went to the British Consul in Turkey and met ever such a nice man, Mr Hough, who was also musical, and you won’t believe it, but Mr Hough went to Prague at the same time as the Freundlich family in 1937.

So, we had met; we had been there for tea and, where does he live? But right opposite Prague Castle. Anyway, so he had said to my mother, “Give me your jewels; give me your money, I’ll send it out in the diplomatic bag” But in the end that didn’t happen. But he said,  “Right, while you [Renate’s aunt/mum] and Lawrie Wardale are busy trying to get the furniture packed…”

My father was going hairless; you know he just wanted…[to get them safely to Britain]

RM: But my mum, she packed a whole lift; all our furniture came. Anyway, Mr Hough said, “Send Nanny and the children to me.”

So we were… I thought it was the British Embassy but again in 1940, [Renate corrected the date – 1998] I was in Prague and went to, first of all to the Embassy, and they let me look out the window and I said, “No, no that’s not the place” and then, by sheer chance, I happened to find that he lived in literally a big tall building that was opposite the top end of the Hradchin [beside Hradcany Castle]and, this is something that horrifies my daughter – or rather, she keeps wanting me to tell this story.

We were having our elevenses, sitting sort of on the window looking over towards the castle, when a great big entourage came out and went down the side of the hill. Somebody was standing up and there was a flagpole beside the corner of this building and somebody was hoisting up a Czech flag, as this car with, I don’t know who it was, whether it was Hitler or Goering

INT: That was very provocative.

INT: To do that when the Nazis were there. Very brave.

RM: So anyway, somehow we got onto the train and Lawrie sent a marvellous telegram to his wife, which is here.

The first one is, “Can you go Prague and fetch Family Freundlich, expenses paid. Please wire.” This one is dated St Andrews, 27th March: “Endlich Prague” – Finally arrived in Prague – after several flights and train journeys and crossing borders. I even have his passport, Lawrie’s passport.

INT: So tell us, he got you on the train, the whole family and the nanny?

RM: And, wait a minute, yes another one dated… oh, this is strangely dated the 3rd of April. 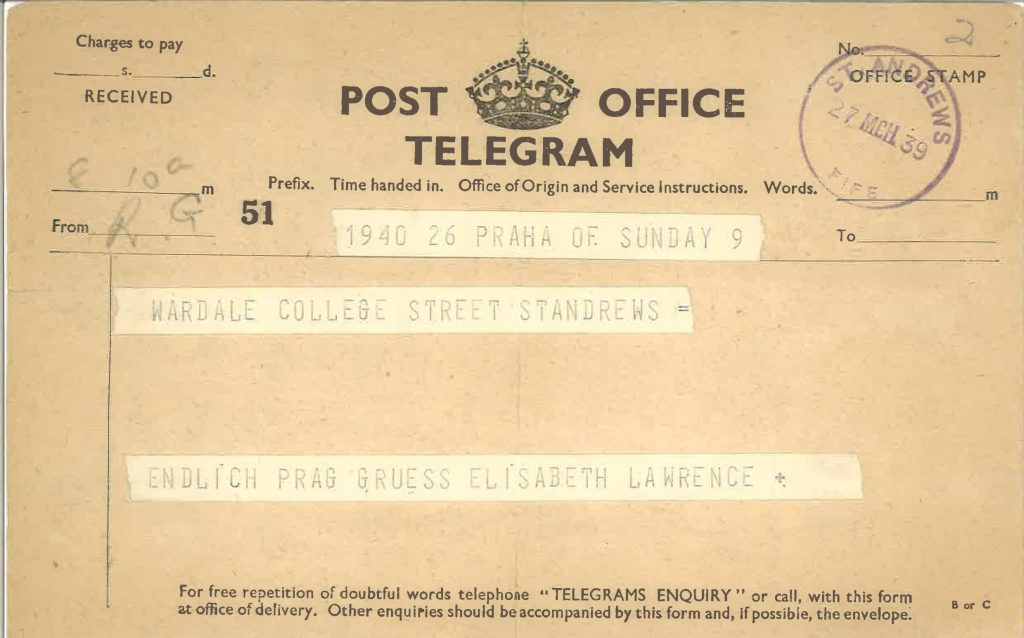 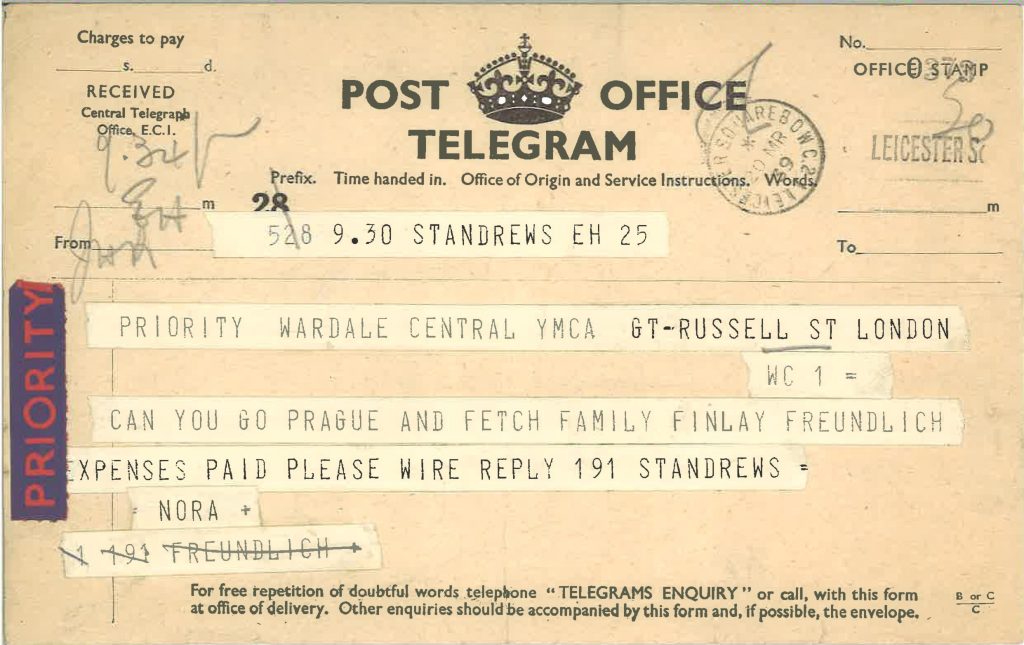 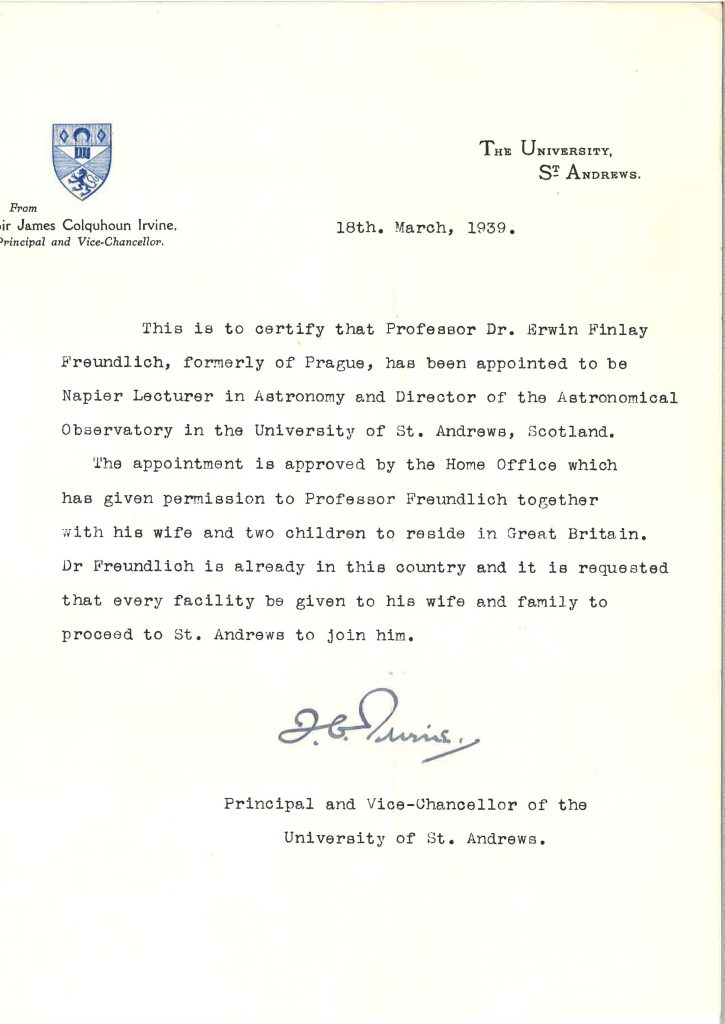