Sonja talks more about her family and describes the fate of her grandparents.

INT: And Marion, you’re Sonja’s daughter, would you like to add anything?

M: Well one thing mum didn’t mention was when my grandfather flew off in this jet with the woman from the Thai embassy somehow or another they ended up in Shanghai and they spent the war in Shanghai and came back.

M: By this time with… you had a half brother.

M: No, no, no, no, the woman from the Thai embassy, yes, he had married this woman and you had a half brother, Robert.

M: Who came and lived with us in Newcastle for, for a while.

M: And, and then he ended up emigrating to…

SH: But my father stayed with us and went back to Germany. He couldn’t stand family life. But… Is that right?

M: Yes, I can’t think what else you may…that was just one point because it was just the fact that my grandfather ended up in Shanghai and I’ve always wanted to go and see Shanghai just because of, you know.

SH: Oh well, you probably will.

M: I might. But we went back to Bünde which is north of…

SH: Where my mother came from.

M: Yes and it’s where your mother had been a nurse for your grandfather’s…

SH: My grandfather’s half brother [Simon Fogel] had a sanatorium in Berlin.[The Bismarck Sanatorium] A great big place where soldiers went to get better.

M: From the First World War?

SH: Yes. And she had no training but the head of this place was my aunt and took her in as, especially as she wanted to get away from the country.

INT: And that’s why she ended up in Berlin?

SH: Yes and then she didn’t want to go back again.

INT: And didn’t you tell me, all those years ago when I visited with my father, that your mother kept a special kind of diary showing all the people who visited the house?

SH: I’ve got it here. Marion will show you in a minute.

INT: And they, they wrote little comments to your mother?

SH: Oh yes. Germans are very keen on little comments. Have you got a book like that?

SH: We actually offered it to the Berlin Museum but the fellow wasn’t keen enough. You know he was keen at first and then when you tried to contact him you couldn’t contact him. So I’ve got the book.

INT: Right. Well I’d like to see it after, which would be excellent.

M: But the other thing was that we went to Bünde.

M: And to see what the place looked like.

M: Where your…what relation was it? Your grandparents?

M: Alright, and we went and found your grandparents’ family house.

SH: Oh yes. No difficulty at all.

M: And we couldn’t find the cigar factory.

M: Yes. But we found another cigar factory still in the area.

M: But, we went and knocked on the door of this factory.

SH: Yes. Yes, and they were very nice to us.

M: They were charming.

M: And took us in and talked to us, and all sorts.

M: And the other thing is, on the streets they’ve got a project.

M: And a ‘Stein’? What are they called, the stones?

SH: Yes they build in…

M: To the pavements…

SH: Yes but what are they? What stones? [Stolperstein]

M: They’re memorials to people who died from Bünde. I’ve actually got a couple of photographs of those and one of them is from, for, your grandfather. [Emil Ruben]

M: And also for his second wife. [Ella Ruben]

INT: And did they perish in the camps then?

INT: Did they perish in the camps?

SH: No. My grandfather… My mother had taken something up from the hospital.

SH: Some tablets. And when we came away, we came to Britain and we said goodbye to them, and on a certain date [24/7/42], I’ve got it in the book, he was called to the police station and they were going to ship him off to wherever, but he’d got this thing in his pocket [poison] so he died in the police station.

M: But your grandmother…

M: No she didn’t and she ended up in Theresienstadt.

SH: But he was eighty whatever and he thought he’d take the easy way out.

INT: Yes, as did many others.

SH: Yes, yes so he was very lucky; he’d had a charmed life. Like my mother.

INT: Ok thank you Sonja. That was great.

INT: Thank you very much. 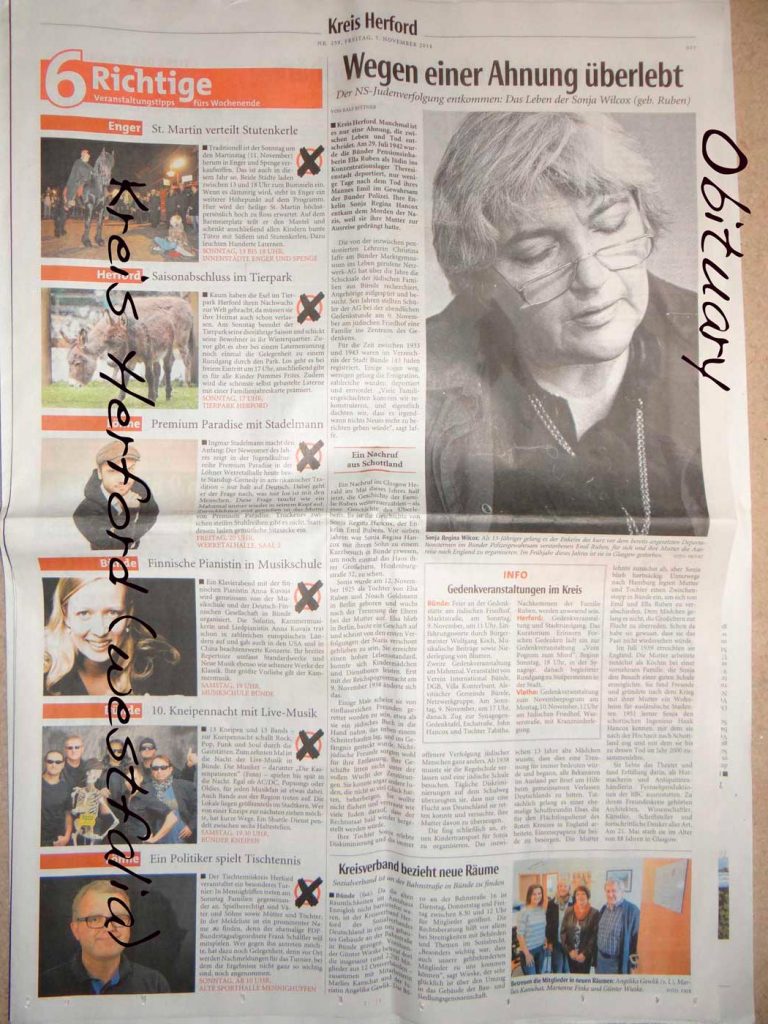 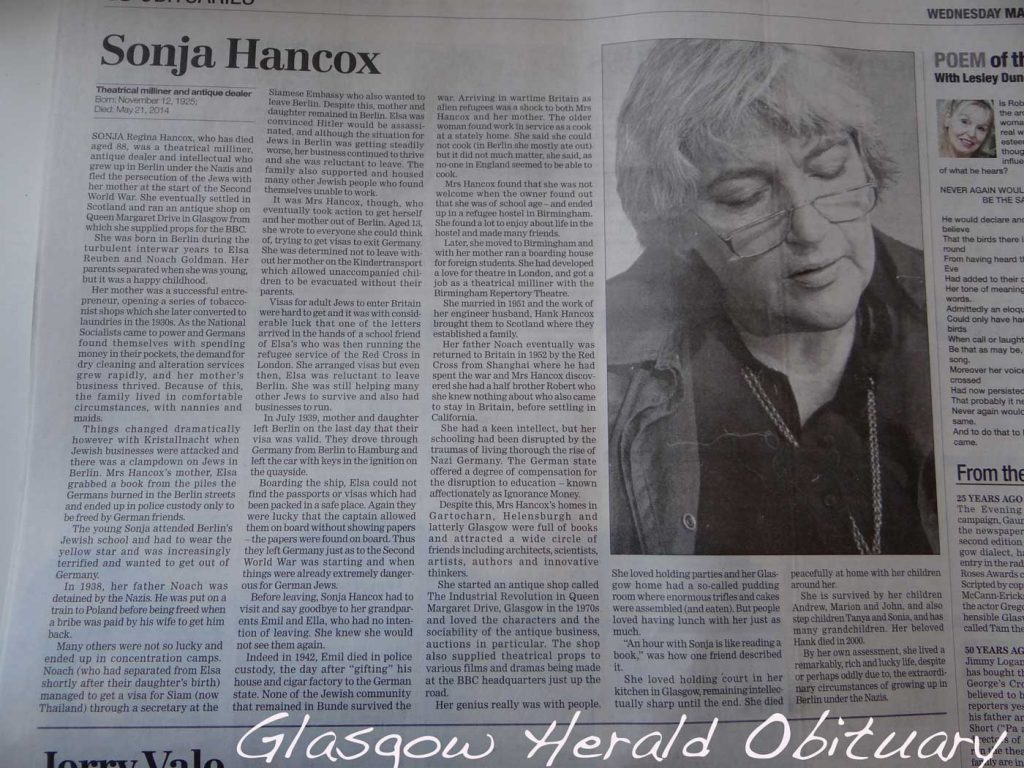 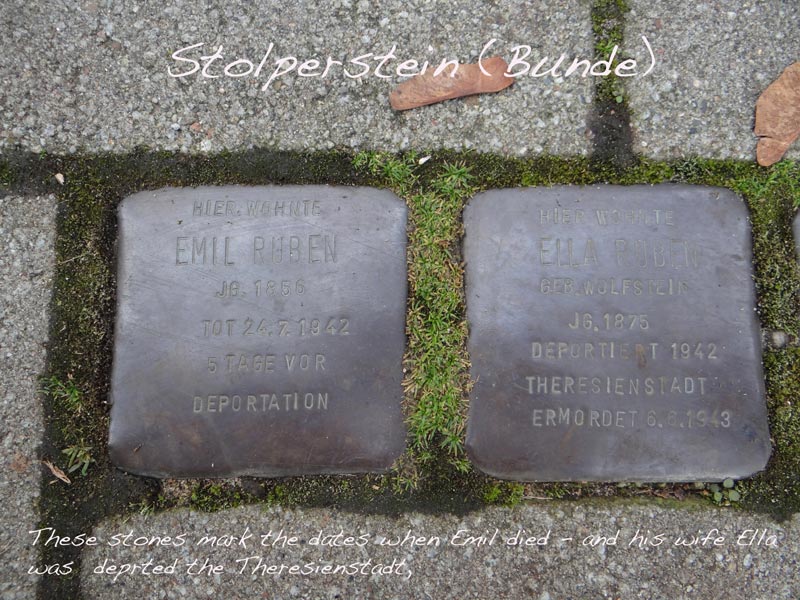