Sonja tells the interviewer why she ended up in Scotland and about her life here.

INT: And…So what, after all these apprenticeships, what job did you end up doing?

SH: I became a milliner.

SH: Because that was part of my mother’s – what she did in the shops.

INT: Right, and yet you ended up here in Scotland. How was that? Because you were down in the south of England?

SH: Oh yes, I met my husband in Birmingham

SH: And though I didn’t want to get married, I did. Yes he was, he was a civil servant. [Sonja’s husband, Hank, was head of the Ministry of Fuel and Power in Scotland].

SH: Engineer, and he was moved up to Scotland and so I came along. They wanted a married couple.

INT: I see, and what was your first impression of Scotland and the people?

INT: Ah so you were disappointed then?

INT: OK, so tell me more about Scotland. When you came here did you meet or mix with any of the, the other refugees or Jewish community?

INT: How did you do that?

SH: In Birmingham before we came up we met a journalist and he was coming back the next day so he arranged to meet my husband and he arranged to…Did you know Isi Metzstein?

SH: He brought him along.

SH: And he had two brothers and two sisters and we, we knew half of Glasgow by that time, you know. And he brought other people. So we knew a lot of people.

INT: Did you tend to mix with other people who had come escaping Nazi Germany or local people?

SH: Both. Both because some of the German people went to school with others whom they brought.No, I mixed with a mixture.

INT: A mixture of people. And did you find Scotland a welcoming place?

SH: Oh definitely because we’d already got so many friends.

INT: Well that’s very nice. Were you involved in any sort of voluntary work here or were you working always as a milliner when you were here?

SH: Ah I did miserable Oxfam work and…

SH: No, no not when I first arrived.

INT: You had a family?

INT: How many children did you have?

SH: Well, by the time we came to Scotland I had three children and two step- daughters.

M: Eventually you had three children.

SH: When we came to Scotland.

INT: Then you took, then you…They’ve probably been in your mind the whole time.

INT: I’m sure that’s the case. Is your Judaism significant in your life? The fact you came from a Jewish background?

SH: Yes and no. Yes because whatever we argued about it was nothing you could ever forget or put aside. But religious I’ve never been. Is that right?

M: I’m not quite sure what you’re saying actually.

INT: You mean whatever you argued about back in Germany…?

M: No, but you didn’t …Religion never played a part. I mean I’ve never been to a synagogue with you.

INT: But I suppose the reason you had to leave was because of religion.

M: Well exactly, well exactly. And so I’ve never, you know, and that is quite a sort of good reason for not getting involved in religion when this is what, you know. But…

SH: No I’ve never been religious but on the other hand I would never have…

INT: Denied that you have…

SH: No, no never. No it’s a difference of approach.

SH: But I don’t know how you feel, do you feel very religious?

INT: No, not really. 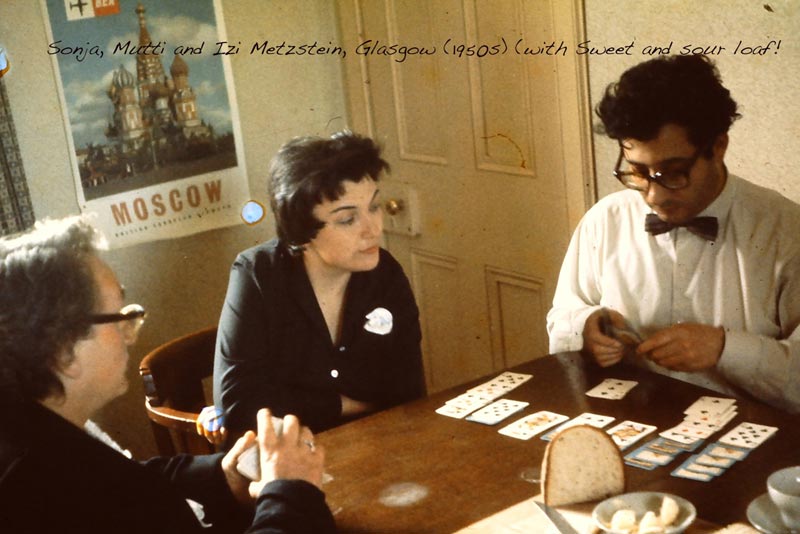