You are here: Home / Sonja Hancox – Life Before The War

Sonja talks about her family and the changes that she noticed once the Nazis came to power. She describes life in Germany before they became refugees.

INT: What year were you born?

SH: Not very beautiful surroundings. My mother married somebody in Czechoslovakia whom she met and they fell in love and I was conceived, at least, there. They soon found out they were most unsuitable. They went to Germany and wanted to divorce but the German government wouldn’t give them a divorce. By German law they weren’t married. So by German law they had to get married again before they could get a divorce. So I’m telling you that this is not a sort of ‘clean living’.

INT: No, not a simple story.

SH: No. Now my father had a cigar works in Westphalia, and cigarettes and tobacco and so forth, and he sent to my mother in Berlin to sell because she didn’t want to go back to the country. She wanted to stay in Berlin where she had been a nurse in her uncle’s hospital. So I was born, somewhere not very beautiful, in Berlin among tobacco etc… So I remember nothing at all about this but I know that they got divorced because I’ve got their divorce papers. And my mother went into business in a bigger way and even set up my father because he wasn’t very business like.

INT: Even after he was divorced from her?

SH: And they might not have liked each other but they both fought over me. Now, what else can I tell you about that time? I used to visit him, go away with him at the weekend, and my mother worked very hard. That’s full stop at the moment, I don’t know where you want to go.

INT: Were her parents still alive? Were they in Berlin as well?

SH: No. My grandfather was alive and my grandmother died and he married again. She was a second wife.

INT: So in the 1930s you were living with your mother in Berlin?

SH: Just outside Berlin, can’t think of the name of it.

INT: It doesn’t matter. And when did you…? Because you must have been aware you were about 10…

INT: When the Nazis came to power, did that affect you?

INT: Did you notice changes?

INT: In what way?

SH: Well first of all we heard. We were on… my mother and I were on a rowing boat and we heard the announcement that Hitler was now our leader and that we should all be very pleased about that.

INT: And was you mother aware that things were going to be difficult?

SH: My mother was…my mother was politically active in Berlin. She was, I don’t know quite, but she certainly didn’t welcome Hitler in. And one of her cousins, who I was named after;

SH: Yes, and my mother was neither religious nor politically correct, nor anything else. She, she was a sort of merry widow, and they had, what would have been called, ‘the salon’ with her cousin. [Her cousin was Else Kohbieter]. And they had a very good time. They knew all the actors and writers in Berlin…and life for her was very good.

INT: What was she doing?

SH: She had started a dry cleaning and… Aren’t you allowed your elbows up there? Dry cleaning, remaking old clothes, because the people were quite poor, but in the 30s they got richer.

SH: And she was making quite a lot of money. In this, by this time she had three shops.

SH: And things looked up for her. And their lifestyle was very nice.

SH: Something that happened, that I found most, most interesting, was that all the people who had been the pukka lawyers, teachers, professors and everything else lost their jobs immediately and lost their income immediately.

INT: Back in Germany?

SH: Yes. Yes, so on Saturday and Sunday we used to have open house and they all came in, either with their shoe cleaning stuff or their cookery, or they did my mother’s hair or feet or something or other. And it was a totally open day and they exchanged things and they sold things and my mother bought what she could because she had money you see. This was still in Berlin.

SH: Yes but none of this was terribly obvious. You know the shops were open. You see, when you have a dry cleaning and remaking thing, it goes on. And people were asked not to go into the shops but they got coats and hats and everything in there so I have no idea of how it just went on.

INT: So she, she must have managed.

SH: Yes she had managers in the shops.

SH: And that was quite a fascinating bit – that they all came to the house and…

M: You said Mutti used to feed them?

SH: Oh yes, oh yes. I mean there was food all day and all night.

INT: Was there? That is very interesting and she must have been quite unusual that she was still making money when they had lost their, their livelihoods.

SH: Oh she was, and you see she had, she earned money while they earned nothing. And it was unusual.

INT: It must have been.

INT: But then everything, I assume, changed once Hitler did become Chancellor?

INT: Were there Jewish car numbers?

SH: Oh yes. Everything over 350, I think, then the number, was a Jewish car number but she also had a Polish flag in her car.

INT: That was quite provocative then at the time?

SH: Oh yes she was very provocative. And she got into trouble with the police quite often. And, the one time when she really fell out with me, the police had picked her up in the night and I never woke up. And she thought that was…

SH: Really not, not the thing to do. Anyway, we got along very well and I got into the theatre and the cinema late at night, you know sort of, she took me along everywhere. And we enjoyed life and she didn’t want to leave Germany because she thought somebody would kill him [Hitler], but nobody did, you know.

INT: So, what happened? What, what forced you out of Germany? And when did you leave?

SH: Well our passports were coming to an end. I think it was the end of June, 1939, our Polish passports came up. And just before then was Kristallnacht, and they made rather a mess of the synagogues and they picked up my father and put him on a train. And they put them [Polish Jews who were expelled from Germany] between two stations, one German station and one Polish station and left the train there.

And if you had money you could make your own decisions, [i.e. the family had to pay to get him back] and if you had none, heaven help you.

INT: And was he able to escape? Was he left in no man’s land or…?

SH: He was left in no man’s land but he was quite an attractive looking man and he had met some woman who worked for the Thai embassy and she got him a passport or a visa or something and he was allowed back to Berlin for two days, or one day, two days but no longer. And he chartered a plane, I’ve got a photograph of it, he chartered a plane and took her, this woman; I don’t know whether she was Jewish or what she was, to take her, her mother, her son and somebody else… and they all flew off to Thailand. I don’t know where they changed petrol or whatever, I have no idea. I saw them off and it was a tiny little plane with about four seats or something. And it took all his money.

SH: You know, especially when, when everybody wanted to grab a bit of it. But they flew off and I went to the aerodrome and saw them off. My mother didn’t go.

INT: What were you on your birth certificate? Polish or…?

SH: I was Polish. I was never German. I was Polish till the last day there but it was going to be all gone. We made good use of it but it was no use after that.

INT: Sorry what was no use?

INT: Oh your passport. So how did you get out, what happened?

SH: If we’re not allowed tea yet, we must have raspberries. Now I’ll tell you we had to leave by the day the passport was up and we arrived in our car with our Polish flag in the back, at Hamburg, to get on a boat and unfortunately my mother, who was a bit skittish about facts, had packed her passport and her travel documents in one of these big trunks, you know. And we had the most delightful captain on this boat – a little, not a very big one, from Hamburg to London. And he let us just tip them up on deck and he said he would take us to Hull, where he was going, but if we couldn’t find them he’d have to bring us back to Germany.

SH: So we made good use of the time to look for the passports and of course they were wrapped with the writing paper and so forth.

INT: That must have been terrifying?

SH: Oh I mean I was terrified of my mother, and for my mother, because I felt so responsible for her. She was, she was a delightful woman, and everybody loved her, but she was totally irresponsible.

SH: Did you have a good mother?

INT: Yes she was very responsible but luckily we were never tested as you were. Did your mother know where she was going in London? Once you arrived did you have somewhere to go?

SH: Yes we did know. It started… She was in a private school in Germany and there was an English woman, I can’t remember her name, and she worked for some refugee organisation and… Have a raspberry…

SH: And she said she would find my mother a job and my mother found a job in a big house, an enormous house, ‘behind the kitchen door’, you know. 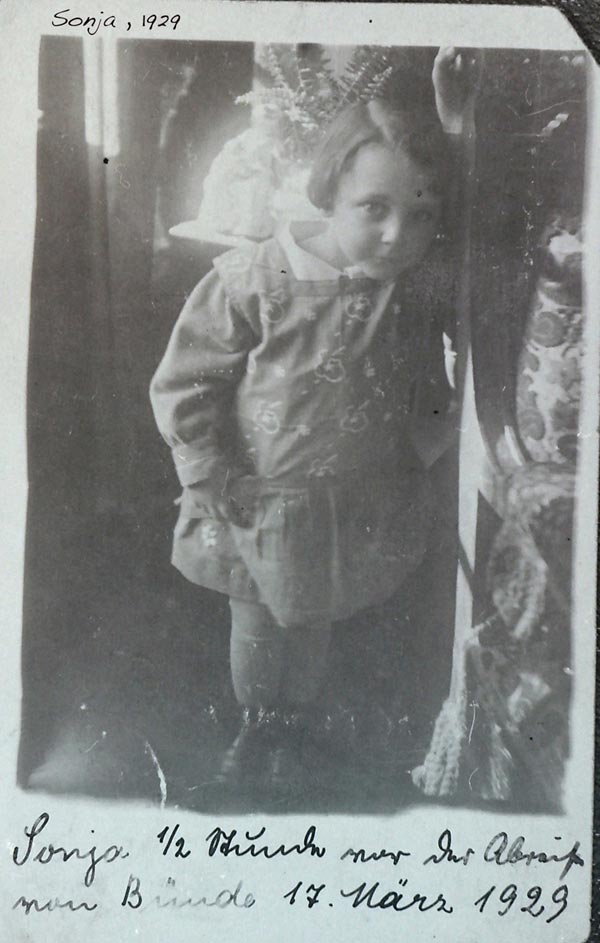 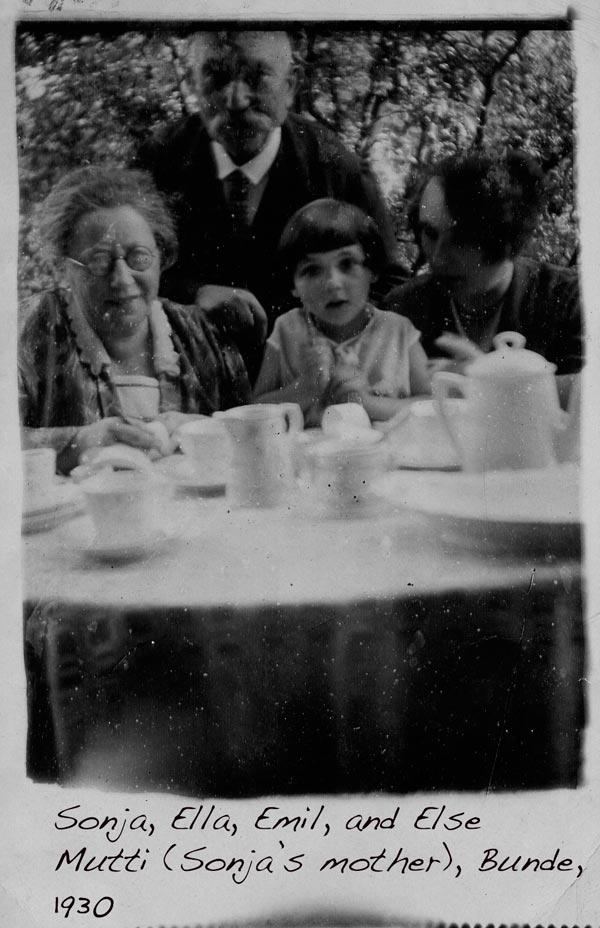 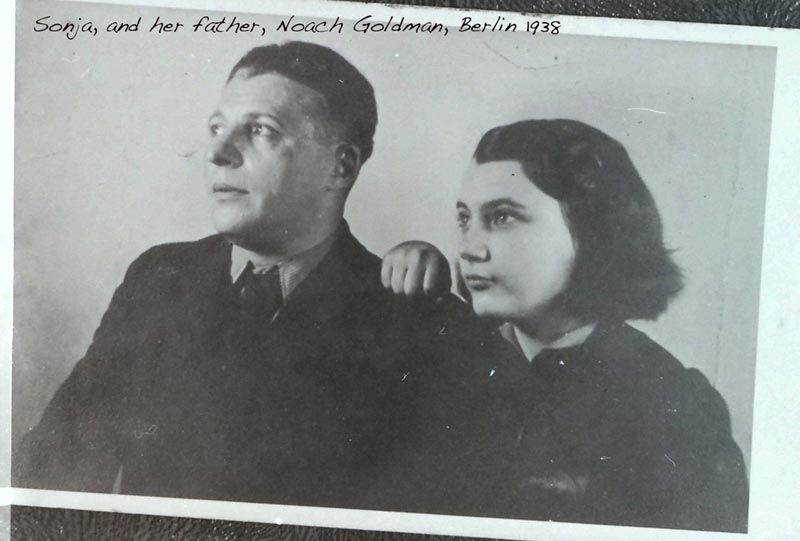 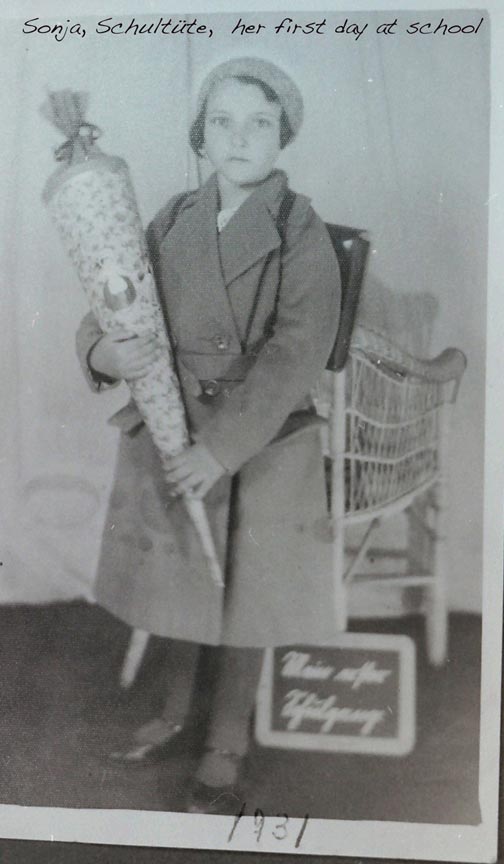