Bob mentions what he can remember of his journey to Britain and his arrival in Selkirk. He goes on to describe his first introduction to the Mackenzie family of Forres.

BM: I’m not sure where we joined the train and to this day I have never found out. Unfortunately there is a complete blank from the time we were put on the train until we arrived at The Priory in Selkirk. I’ve been told since, this is possibly the only way a child of eight years old could cope with the trauma of this upheaval. To suddenly be torn from a happy, comfortable family life with loving parents, put on a train to nowhere and end up in a country where no one spoke my language, except the other children travelling with me, must have been a severe shock to a young child.

I know we landed at Harwich on the 16th of March 1939 because that is the date stamped on my Kinderausweis, the travel permit used by the Burgermeister [Mayor} of Neukirchen on the 13th of March 1939. That same permit also described me as ‘staatenlos’ which means stateless. Germany got rid of me and didn’t want me back.

After some weeks at The Priory at Selkirk my sister and I packed our belongings and went on another train journey accompanied by two ladies from the ‘Refugee Movement’. We eventually arrived at the station at Forres, Morayshire. We didn’t know it but we were to be placed with the family Mackenzie. We found out many years later that the Mackenzie family had originally applied to take refugees from the Spanish Civil War and being told they had all been allocated families and there were child refugees from Germany looking for accommodation they agreed to take my sister and I, as my mother had asked, if possible, that we should be kept together.

On arrival at Forres two strange occurrences took place which have never been explained. On getting off the train I walked through all the people on the platform, straight over to Agnes Mackenzie, one of the daughters of the family. No one in the family had ever been to Selkirk, and yet I somehow knew that this was the person who had come to meet us. The second strange thing that happened was also puzzling… Mr Mackenzie had a car to take us to his home. On arriving the car stopped outside a small shop with a gate on either side leading into gardens. When I stepped out of the car I did not try to enter any of these two gates but walked approximately fifty or sixty yards up the road and entered the correct gate of Mr Mackenzie’s house. How I knew it was his gate to enter I still have no idea. 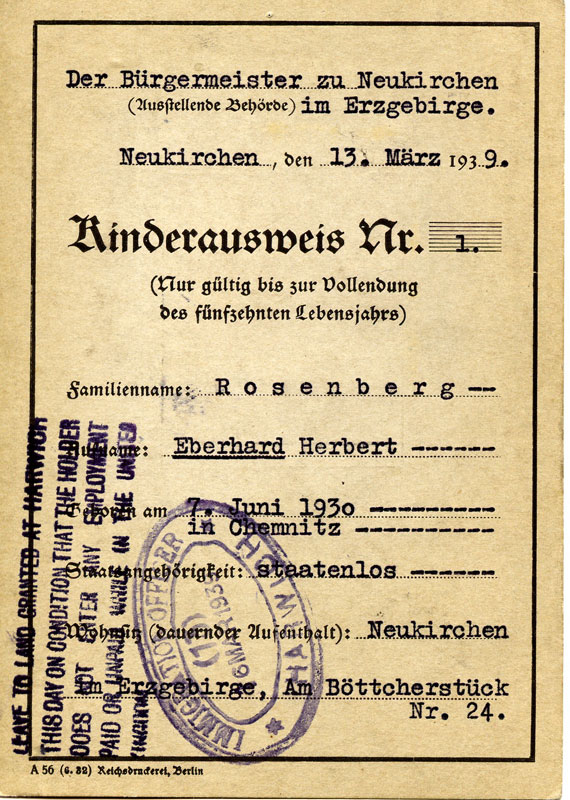