Walter speaks about his birth in 1933 and his family. He describes how his Mother missed out on being an Olympian because she was Jewish.

INT: The date is the sixth of June 2014 we are talking to -WG: Walter Gumprich

INT: And where were you born?

WG: In Münster Westphalia, 15km from the Dutch border

INT: Tell us about your family

WG: Well, father, mother, sister one year older than me. She was born on the 25th of January, if that strikes a bell with anyone in Scotland?

WG: Yes and you want to know when I was born? I was born on the 1st of March, which is also an interesting date in Britain because that happened to be St David’s Day, the patron saint of Wales. So when I was at school and they asked me, ‘What’s your name’ and I said ‘Walter Gumprich’ and they said ‘don’t you have a middle name?’ and I said ‘no I don’t have a middle name’.

They said ‘well you have a middle name; you just don’t know what it is. Go home; ask your mother’. When I asked my mother what my middle name was she said, ‘You don’t have a middle name.’ So I figured if there’s one thing worse than having my teacher think my mother is stupid or too stupid to give me a middle name. So finally on the way to school, I thought, ‘Well my Hebrew name is David Ben Shlomo after my grandfather.

So when I got to school the teacher asked me and I said, ‘Yes, I have a middle name’. She said, ‘What is it?’ I said, ‘It’s David’. She said, ‘Oh I should have known, because you were born on St David’s day’ so I went home to my parents and asked if that was reason I was named…so that’s why I was named Walter David Gumprich.

INT: Did you have any brothers and sisters?

WG: One sister, one year older than me.

INT: What was she called?

WG: Brigitta, which became Bridget and my name was Walter all the time anyway. And she’s lived in Israel all her married life, since 1953. She is Gita.

INT: And what did your family do?

WG: Well my father was a grain merchant and imported grains and that’s why I was familiar with the Winnipeg Grain Exchange. Well, I’d heard of it after, not while I was in Germany, and it distributed in Westphalia, Rhineland and parts of Germany

INT: And did you go to school in Germany?

WG: Well, of course, the outstanding result was that I was born – obviously the highlight of the year! But also the fact was that on 29th or 28th March was when Germany became a dictatorship and at that time things changed drastically and a lot of Jews realised that if this happened then life would become untenable because the party that came to power, took power, had outlined a programme of anti-Semitism that was quite extreme.

It was so extreme, it was unbelievable but it rapidly became known that it was believable because laws suddenly passed.

Jews that were born weren’t made Staat-Burgershaft, given citizenship, so I was one of ‘fortunate’ ones who wasn’t given citizenship, German citizenship, and so I was essentially stateless until 1948 when German Jews in Britain were allowed to apply for British citizenship and my parents did, and your parents probably did as well I’m sure, and became British subjects and citizens and so that was the first and so then all sorts of things happened.

My father, I think it was a couple of years after that, about 1936-37, but the idea was to isolate Jews so Jews weren’t allowed to do business

and non-Jews that did business with Jews were listed and publicised so Germans wouldn’t want to do business with them so it was completely impossible for Jews to do business with non-Jews and since the farming public were almost entirely non-Jewish, my father was basically out of business and so for the years for sure 1937/38 he did absolutely no business at all. He at least tried to leave and in fact one of his business associates left for Chile and that was how we eventually got business papers to emigrate to Chile.

INT: And how long did that take?

WG: I don’t know how long from when my father first applied because I wasn’t privy to that information – I was six years old when we left…I was born in 1933.

INT: Did you go to school?

Walter’s mother, the athlete, and the ‘sale’ of her sports car

So my mother… it was 1936, I believe, that Jews had to sell their cars for one Mark. That was legal tender.

So my mother two weeks before, she had a nice BMW that’s still made, Three Series. It was first made in 1936 and that’s when she got it. My father bought it for her.

So she went to the citizen police chief who she went to school with and knew personally and said the police force were going to get this car and it was a nice car. And he didn’t have enough seniority to get it probably so my mother said, ‘You can have it right now on one condition: – that when you’re at work [I can drive it’], and the police station was only two blocks up the road on Grevener Strasse where we lived. And you can have it right now.

So he said fine. It helped him a little bit because he felt a little better because at least he’d be given it, even though, you know, it was still stealing but nevertheless my mother had the use of her car.

My mother had a ‘Sportabzeichen’ [German Sports Badge], (which was a precursor to the Olympic sports’ medal that’s usually just for professional athletes but my mother was an athlete and it was engraved and she made a point of wearing it.

She was driving the car in downtown Münster and she was stopped by a Nazi, who came out from the pavement. ‘Stop the car!’ He approached the car and my mother pre-empted and said, ‘What do you want?’ and he looked at my mother and he saw the Sportabzeichen and he said, ‘Oh I’m sorry. I made a mistake’.

So my mother looks to side and she saw hidden in the doorway a local Nazi who had told this guy, ‘She’s a Jew. Stop her! She’s illegally driving a car.’ But when this Nazi saw the Sportabzeichen, well, he said, ‘Every German knows that Jews aren’t athletes and haven’t a Sportabzeichen. You’re eligible for the Olympics so you can’t be Jewish’. He apologised profusely and let my mother go.

Well these are some of the things, so you’re wondering – if a Jew could walk downtown he would never know when he would be accosted and told, ‘You’re doing something wrong. You’re doing this wrong’ and they had no rights in the law at all. They just had no legal rights in Germany, period, being Jewish, you know.

INT:Can I ask what type of athlete she was?

WG: Decathlon, so she did swimming, high jump, cycling, long jump and sprinting. It was a mixture.

INT:And was she in the Olympics?

WG: No! She was Jewish! What do you want?

INT: So she wasn’t allowed?

WG: Okay, so she was a member of Preussischer Sport Club in Germany. In, I don’t know if it was 33 or 34, the government said, fine –

‘If you want to compete in athletics in any national events, receive any funding or anything at all, you are not allowed to have any Jewish members’.

So what are the Jewish members supposed to do?

INT:They formed their own clubs?

WG: Right, what could they do? In fact, my mother and father did form a Münster club but it was just for Jews so you had no competition of any consequence.

Walter describes the arrest and imprisonment of his father

WG: Not yet, so my father was interned and then in Münster prison

INT:  Is this after Kristallnacht?

INT:  So they were arrested in Kristallnacht?

My father made a point of it wherever he went. He wore it and that was respected. They couldn’t just throw everything out. You couldn’t just say that Jews were given a different Iron Cross from regular guys, you know.

So that’s maybe a reason that he used to get around town and he was fairly well known in town.

Anyway, my Dad’s in prison as I mentioned before. Periodically the SS would come and see if the prison was full, in which case they would take a load of men to the concentration camps so the German police used to say, ‘Oh no, there’s lots of room’ though the prisons were absolutely crammed.

The reason they did that was because the police knew very that going to concentration camp was not a good idea, was not a healthy situation, but there were people dying also of diseases and what not and there weren’t just Jews at that point, there were also political prisoners who were in there.

Willy Brandt, who became Mayor of Berlin, escaped, because he was a Socialist, to Norway. Now he didn’t go just for the sheer hell and delight, he went because it was dangerous to stay in Germany and he left well before 1939. My father had initiated getting the papers to Chile through a friend of his who was there already and my mother finalised this when she came to prison with the papers.

Links to Other Testimonies by Walter Gumprich 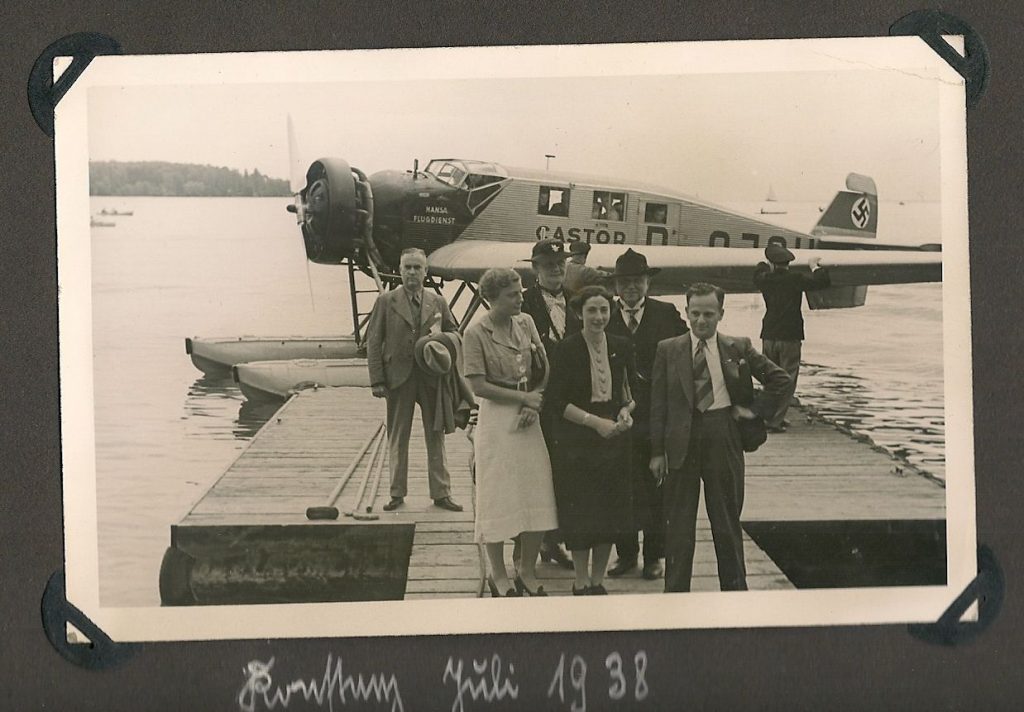