Eva describes the poverty of Hungary after the war. She mentions the horrible behaviour of some of the Russian ‘liberators.’ she tells the interviewers what happened when she and her mother tried but failed to return to their flat.

E.S. Actually I went back after the war when I was liberated.

So it was very good I went back because I got a little wages and then also it went with they had to give me lunch. So…

INT: So you could get a meal.

E.S: So they were not Jewish. They had a little at home, you know, more than… because we had nothing.

E.S: But of course. They were our liberators. Of course.

E.S: But you know that after, when we eventually were liberated that we were not allowed to go on the road, especially me. Young girls because was…

E.S: As I said it was three days, you know, when an army came

E.S: It was three… They robbed everything – they break up all the shops and steal everything. And I don’t know what else they did, you know, I don’t know. There was three days; that is a rule. I think for the soldiers. And they, I remember all they did. There was a kosher wine seller and they broke this up and the whole road was filled with, with wine because they opened up the big barrels. And then I remember my mother managed to get a little bit of it and brought home and some biscuits somewhere. Because they opened up everything.

E.S: Looting yes. Ransacking. It was terrible. But I don’t know, I didn’t see because I was not allowed to go out because they said that a young girl should stay in. So we, I think we stayed at least about ten days in the ghetto and then a little bit everybody started to go out and everywhere was the big tanks with the, you know, facing you with the rifles and everything.

E.S: And my mother and me, she said, my mother ‘We are going home’. And then it was very big snow and very cold and then she managed to get a…how do you call? When you pull?

E.S: A sledge, a little sledge. So we had our possessions, we put it on because we had no strength to, to carry anything. And then we went back where we used to… we walked, there was no transport, nothing. No gas, no electricity, nothing, no heating. There was nothing, you know. It was all ruined, everything.

And then what happened on the way I still was wearing my yellow star because we thought that maybe save me from the Russians, if you’re same, you know? So and I remember we went and it was an open ground, I can’t remember where it was I just saw that a Russian came and got very frightened and he just came to us and was watching that.

And then came over and took out a pocket knife, a pocket knife and cut it off – cut it off and put down and stepped on it. And then said something not nice probably. And then…we didn’t know why he does it, and it turned out he was Jewish. He started to speak Yiddish. It was a Jewish Russian and then we didn’t understand very well but he said, ‘Don’t wear anymore’ you know?

And then I remember he gave me a biscuit, probably that was all he had. So I always remember this episode you know because many people ask me if I have my yellow star but I say no. Some people have, you know, but I don’t have.

So they were very bad after, you know, they didn’t…He was not happy to see any Jews was alive and come back/came back. And then…We didn’t go up. We were afraid to go up. 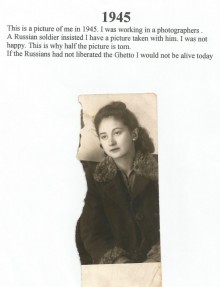