You are here: Home / Ingrid Wuga – Life During The War

INT: Ok. So I spoke to you just before we turned the tape on and I was going to say when did you first come to Scotland? But you told me that you came to England first

INT: So how old were you when you came over?

IW: I was exactly, I had just turned fifteen

INT: And why did you go to England?

INT: Your family knew this family?

INT: So how did you have contact with them?

IW: It was all through Kinder Transport. It was arranged. We eventually, although I grew up in Dortmund, eventually my parents thought it would be easier to find immigration in Hamburg where we had a lot of family. My parents came originally from Schleswig-Holstein – very near the Danish border.

INT: Ok, so this was arranged through the Kindertransport?

IW: It was all arranged through Kindertransport which happened to be very active in Hamburg.

INT: And you were just, how old? Just under fifteen?

INT: Just turned fifteen. Who, who were in your family unit then? Who did you live with before you came over? When you were at home?

IW: My parents, I just lived with my parents in Hamburg

INT: Just you on your own?

IW: Yes I am an only child

IW: I have no brothers or sisters

INT: Ok so they found out through the Kindertransport

INT: And you could come to England

IW: By train to the coast in Holland and then by boat over to Harwich and then to London where not the Dixons but somebody else from the organization, the Christadelphians, a Mr. Overton found me in Liverpool Street Station where we all arrived.

INT: When you were travelling did you know any of the others?

IW: I didn’t know anybody and it was very hard. I’m sure I’m not the only one who says that. To say goodbye to your parents at the station in Hamburg… I will never, never forget waving goodbye to my parents when I was on the train and they were on the platform running along.

INT: What year was this then?

INT: Ok so just a couple of months before the war broke out 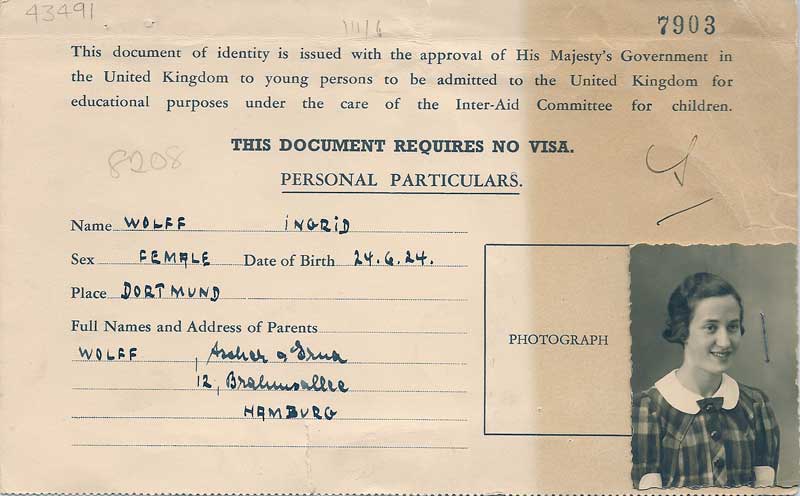