INT: So you came to West Kilbride

INT: And you all lived there?

IW: Yes well my parents had a job in one house and I was in another house and I was very kindly treated by a Mrs. Wright in a small place, not West Kilbride but Portencross. But unfortunately because of the war and being of German origin, we had to leave.

A policeman came to the door and said ‘You can’t stay here anymore – you’ve got to get out. You’re not allowed to live near the sea or near any protected place/protected area’

And through a certain circle… My father wanted to say Kaddish. We heard that his mother had died in Germany (a natural death) and my father said ‘Is there a synagogue near here?’

‘Oh, no. but there’s a Jewish man just down the road. Go to him he’ll be able to advise you’

And that Jewish man was very kind and offered us his house when we had to leave West Kilbride. And that was in Glasgow and that’s how we got to Glasgow.

INT: Do you remember his name?

INT: He let you move into his house?

IW: Yes he…That was in the West End. We lived there for a little while. My father was interned then (most people were interned. Men, also some woman) and we found a job, my mother found a job, so did I as a children’s nurse again, my mother became a housekeeper in Cuthbertsons in Pollokshields and…

INT2: What training did you have to be a children’s nurse?

IW: None at all. I just liked children. I just was very fond of children.

INT: And your mother?

INT2: To become a housekeeper?

IW: Well she was always a good cook

IW: And she just said instead of having somebody work for you- you do it yourself

INT: What were your impressions of Scotland at the beginning when you first came?

IW: People were very friendly and very helpful and while we lived in… What’s it called? Victoria Crescent Road in the West End. We lived in Victoria Crescent Road in this house (huge house) and we said to, what was the man’s name? It’s gone out of my head just now. He was related to the Samuels who are quite well known in Glasgow. ‘It’s very kind of you to offer us your house but we cannot pay you any rent’

And he said. Mr. Cohen I think was the name, yes ‘When I come to Glasgow you will cook me a meal and that will be fine’

He was very, very kind. Very kind indeed. They were not exactly short of tuppence but they had a house in, as I say, in Glasgow and a beautiful holiday home in West Kilbride on the Portencross Road.

INT: So were you aware that there was a Refugee Centre?

IW: No. We were… we met somebody in Victoria Crescent Road who said ‘There is a Refugee Centre and they meet in West George Street’ It was in West George Street at the time then they moved that flat. We met on the Saturday and that flat then was given up and they found somewhere in Pitt Street and eventually the house on the hill on Sauchiehall Street.

INT: So you went. You went there and met people there?

IW: I went there. I met people there.

INT: Did you meet friends through that?

IW: I met friends. In fact I met Henry who, we married eventually.

INT: So this is where you first met your husband?

INT: Ok so you met him at this

IW: At the Refugee Centre

INT: At the Refugee Centre

INT: And how old were you then by that time?

INT: So you were very young

IW: Fairly young and two girls I’m still friendly with I met there. One went to America eventually and one girl went to London but we’re still very, very good friends.

INT2: What activities did they have?

IW: Ursula, I think she worked in an office and Eve definitely. Eve, her name was Elfie.

INT2: Uh huh and what did you do at the club?

IW: At the club we just had meetings, in fact, very interesting meetings. There were older people in this club who were students and some were already doctors. People from Czechoslovakia and Austria and Germany and we had very interesting lectures on a Saturday night and on a Sunday we would go rambling into the country and that was quite carefree. It was the main thing to meet.

INT: How many people were there approximately?

IW: Oh, a lot. Henry might remember better but maybe altogether seventy people – quite a lot of people. And there was, eventually in this house on Sauchiehall Street there was a café and you could have a meal that was affordable. It didn’t, they didn’t make any profit; it was just enough to pay the women who were working in the kitchen. It was very good that you could eat there.

IW: But we didn’t eat out a lot

INT: So during the war years then you were between the age of about fifteen and twenty-one – yes?

INT: And you were working as a nanny/child minder?

IW: Eventually, no, eventually then I got out of that. The club, the Refugee Club gave me the courage to get out of that kind of work. It was very boring sitting with a family at night and looking after a little boy. It was, I mean I wasn’t ill treated

INT: No but a bit isolated?

IW: But washing nappies – it very boring and as I said the Refugee Club gave me the courage to go out and…I was always quite good with the needles/sewing and I got myself a job in a very nice dress shop and I learned to do alterations and at night I went to a school (evening classes) to learn how to cut out so that I was able to make garments.

INT: To do the patterns?

INT: Where was this shop that you worked in? Was it far from where you lived?

IW: No it was within walking distance. I was able to live in the youth, then, the girls’ hostel which was in Renfrew Street and the shop was just down the road at Charing Cross.

INT: And your parents?

IW: My, well my father was interned and my mother got a job in, again as a housekeeper, in Cuthbertsons, the music shop.

INT: So she wasn’t far from you then?

IW: Oh yes, that was quite a bit away. I could only see her maybe once a week or so

INT: Once a week. Ok. So you were, you know, you were making a life for yourself then?

IW: Well that was later

IW: Not right, not right away

INT: Not right away

INT: Just sort of during those years?

IW: He was also interned. He was interned. In fact he had quite a difficult time because during the war his mother was still in Germany and he wrote to his mother via Belgium and France, where he had uncles, and these letters were intercepted and he was called a spy. So he was taken. He wasn’t, he was far too young to be interned but he was interned and eventually sent to the Isle of Man. 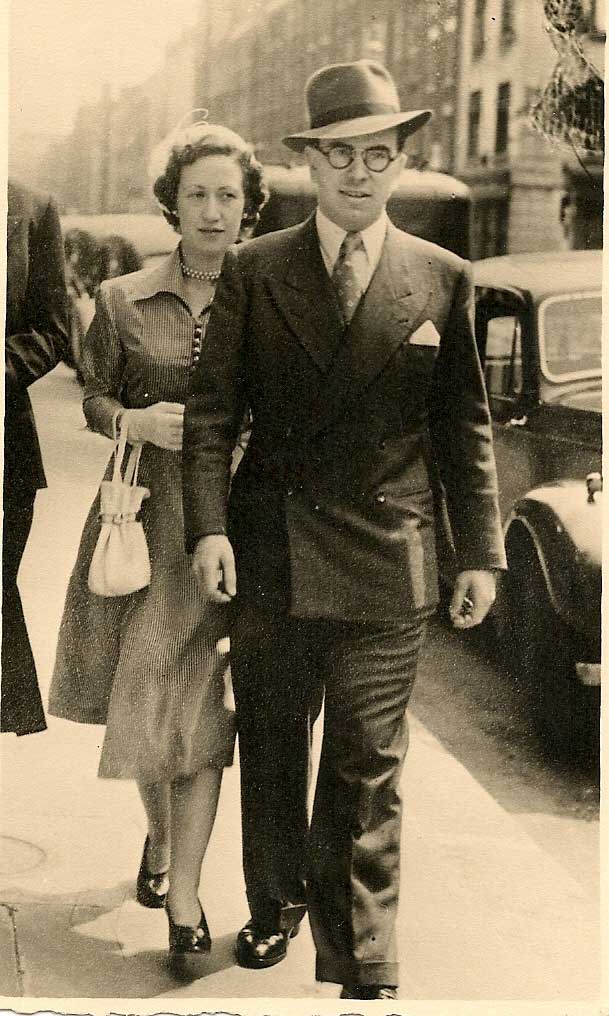