You are here: Home / Ingrid Wuga – Reflection On Life

INT: You mentioned that when you came over… when you left your home to come over at the beginning and you waved goodbye to your parents- Do you sort of reflect on that? How different things could have been had they not come over? Do you feel…

IW: I was very worried, I was very worried that my parents might not make it in time because my father was taken into custody again into…well, it was a concentration camp but it was only a police station where he was for a few, I think, over a week and he was accused of espionage. And he was freed and right away, they had permission by that time to come to Britain, to Coventry and they just got out one week before war broke out.

INT: It was worrying and close, but at least they got here.

IW: They got here

INT: At the right time

IW: So I feel I’m very, very lucky because many of the Kindertransport people never saw their parents again. So I feel very blessed.

INT: Yes. You’ve lived in Scotland all these years

INT: So if you’re thinking back over the years that you’ve been here have you got some really strong good memories that you could share with us? And then some maybe not-so-good memories?

He had a cousin in Lyon and he always wanted to go to Lyon to work in the catering trade in Lyon because it’s well known for good cuisine. And we met Henry’s cousin in Paris one year and Henry said ‘Kurt you were always going to get me a job in Lyon?’

He said ‘Well come with me tomorrow’

And Henry said ‘Given the chance I’ve got to go’

So he went to Lyon, got himself a job and – ‘You can start next week’

INT: Did you go over while he was there?

IW: No I couldn’t. I had to do my dressmaking to earn some money to pay the rent/share the rent with my parents and he was back in time just for Hilary to be born. But I worked. I kept the things going here. We didn’t know whether he would earn any money in Lyon but he did earn a little. Not very much, but enough. He said that it was an experience that he would never like to have missed. It was really good, he worked in two…

INT: It was a good opportunity for him

INT2: And did he think the skills that he got in Lyon, that he would be able to come back to Scotland and use them?

IW: Well eventually we, eventually Henry wanted to earn some extra money and a friend of ours said ‘Why don’t you do the odd function?’

He said ‘function? What are you talking about?’

I think it was New Year and Henry must have been quite good at it because somebody said ‘Who did your function?’

‘Oh that guy up the road’

‘Can you do a function for me?’

And eventually we got so busy that we started our own catering business. We catered in…By that time we had a flat of our own but

INT: And what was your involvement in the business?

IW: But he decorated the cakes.

INT: Ok, but you did the baking?

IW: I did the baking

INT: Ok so you would have been very busy with that?

INT: So have there been any lows? Anything?

IW: No you just get on with it. If there was a low you … And our business was right away kosher. We said ‘No we don’t want anything…’

INT: You made that decision yourself?

IW: Yes we did

INT: Is this because of…?

IW: And we catered for non-Jewish functions

IW: And we told them that we could not give them milk in their tea after a meat function and they said that’s alright. But nowadays you have vegetarian milk.

IW: That is permissible.

INT: You were telling me that when Henry set up, when you both set up the catering business, you wanted it to be kosher

INT: Is this because of your links to Judaism?

IW: I would say

INT: What I’m trying to ask is how strong have your links been with Judaism? How important in your life has it been?

IW: Well when I came to this country, when I was in England first, people said ‘How did you manage your food?’ and I said ‘You eat what you’re given or you go hungry’

I didn’t need to eat pork or bacon but the meat was definitely not kosher. But you just get on with it.

INT: So prior to coming over then (when you lived back home, before you came over here) had you lived..?

IW: Not one hundred percent. My grandparents yes and I have very, very happy memories of spending holidays, summer holidays with my grandparents. They both lived in a small town in the north of Germany and I’m quite sure that was to the letter of the law.

IW: Traditions yes, traditions yes. But here, once I got here you just, as I say you eat what you’re given or you do without.

INT: And then later on after the war you were married and did you…I know you were talking about being part of the refugee club initially, but then throughout the years

INT: Initially you were there but later, in later years have you had an involvement in the Jewish community? Apart from obviously the catering business (you are well known in Glasgow for that).

IW: Yes, oh yes, eventually people… In fact when I went to the, or we went to the refugee club somebody said once ‘Oh you all keep yourselves very separate’ and I said ‘Look you must remember we are visitors in your town or country. I cannot come to your door and say may I come in. It’s for you to invite us’ and somehow we…if you think about it if you go to another town, unless you meet people you are a stranger and it can be very lonely. And I would of, we would have liked to mix with the Jewish community in Glasgow right away but it wasn’t that easy. They felt we wanted to keep ourselves separate but we didn’t. We wanted to be mixed.

INT: So it was kind of a, it’s a bit of a…it sounds like it is maybe a bit of a breakdown in communication in a way?

IW: It was. It was. When I did dressmaking with a friend one lady said ‘You know there is a Jewish Music Society here in Glasgow? And I hear you always play nice classical music on your radio’

She had something made by this friend and myself. And Henry and I joined this music society and that opened up the Glasgow Jewish community. We met other people and it was a very welcoming affair.

INT: So then you began to feel more part of the Glasgow community?

INT: Apart from people that you met through the refugee club then?

INT: You sort of, so you became a part of the wider Jewish community?

IW: And then eventually…In any case, yes

INT2: What have you given… you’ve, I know you have given back to Scotland and the community (i.e. BLESMA – the skiing for handicapped soldiers)

INT2: How did you get involved with that?

IW: Oh…I don’t remember but we’ve been going with… We must have met someone?

INT: So when did you start skiing?

I think that’s why/how we might have got involved with BLESMA which is British Limbless Ex Servicemen. It’s a big organization where soldiers or ex-soldiers have lost a limb and they need instructions. They… BLESMA gives them recuperative holidays I think once or twice (I’m not quite sure how often) and we’ve gone with them for many, many years to Austria where we skied. Henry instructed them or skied with them and I, I’m…Henry is an instructor I’m only a helper but I had quite a few soldiers who I helped to skibob down the hill.

‘No’ was the answer

So I said ‘Well, let’s go to the other side’

So ever since then BLESMA calls me ‘Auntie Ingrid’

INT: That’s lovely. Tell me, do you still bake?

INT: And what about your own family? Are they?

IW: Well we have two daughters

INT: Are they in Scotland or are have they moved away?

IW: No. One in Scotland, in Edinburgh. Jillian (the younger daughter), her husband and two sons live in Edinburgh and Hilary (who married Paul) lives in London and they have also two sons. So after two daughters we’ve got four grandsons.

IW: And very happy with our sons-in-law. We get on extremely well with them so there’s no problem.

INT: Very good. Well thank you very much. It’s been 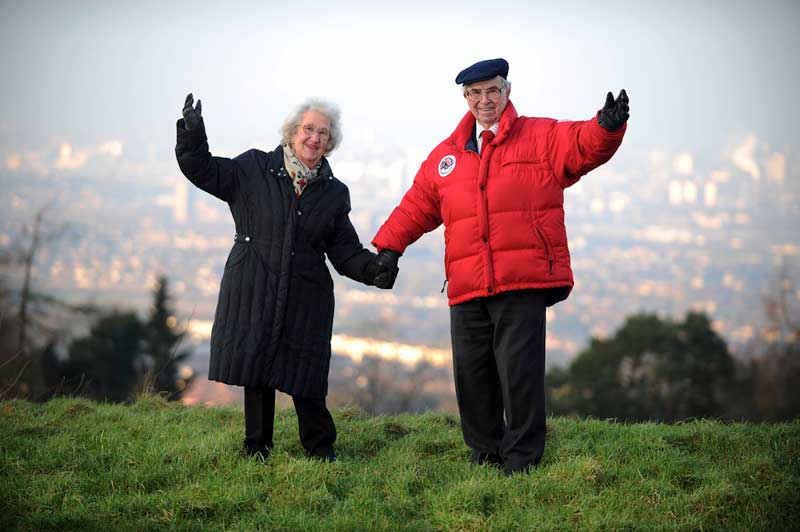