At the end of the war Marion’s mother went back to Poland and Marion eventually came to Scotland.

M: My aunt came to London to meet the transport of children that Doctor Shoenfeld brought from Poland.

INT: So sorry can you go back a wee bit and say who was Doctor Schoenfeld?

M: Well Rabbi Solomon Schoenfeld  was a Rabbi in London and…

M: He realised that after the war, a lot of children of course millions perished, all our family nearly all perished except for us who were in Russia during the war. That’s how we survived.

M: Oh that is a very long story, (laugh) well my mother was terribly afraid of the Nazi Germans and she really wanted to sell all the property and come to England before the war because my aunt, my father’s sister was already in Oxford. She was a scientist and eh she had got her BSc and PhD from Krakow University in Chemistry and then she worked in the Institut Pasteur in Paris and she returned to Poland I think just when my parents were getting married and she would have liked an academic career and the Krakow University, which is a very famous University, very old…

M: [ The professors] said yes, no problem because they knew her as a first class student and you know very hard working, ah there was only one little problem, she was Jewish. If she was to get baptised Catholic, no problem. So of course there was no way [she would convert], my grandparents were very Orthodox. In fact for her to study was already you know quite extraordinary from such an Orthodox family but she was extremely strong willed. She was only 18 months younger than my father, two older siblings had died and anything my father did she did only better.

So anything he was learning she learned right there with him, so when he studied for his Bar Mitzvah, she was right there with him. So she knew everything, she was really extraordinary. And so she wouldn’t get baptised so she waited for an opportunity how she could get maybe to Britain and do some work here and there was a Professor came I can’t remember if it’s Oxford or Cambridge but anyway she spoke to him and in November 1938 she actually came to England. I have a journal here which I just got last December. And there is a whole long article about my aunt in it.

INT: Really, Bulletin of the History of Chemistry

M: Schoental, that is my maiden name.

M: So she actually worked in Oxford in the Sir William Dunn School of Pathology and she was working on penicillin.

M: .with all the people who later got the Nobel Prize, the FRS, and she missed out on it because well there was . (laugh). No, there was Professor Florey who was in charge because, although Fleming discovered the penicillin it was terribly unstable and it was very difficult to get it purified and extracted and crystallized and so on.

So there was a Ernst Chain who was a refugee from Germany, and she, he was brilliant scientist but I think she didn’t like him personally and she worked quite. she’s mentioned in all the books, in Fleming’s, in Fleming’s biography and Florey’s biography and Chain’s biography because I have these books. She’s in the photographs but she went to Professor Florey and said I can’t work with this man, get me, give me something else to do and I think that’s how she started on cancer research. And that’s how she missed out on the Nobel Prize (laugh).

M: .and the FRS but anyway after some years, she corresponded with Professor Cook who was Professor of Chemistry in Glasgow and he was a great carcinogen specialist so she came to work in Glasgow. So that after the war when I came with this transport of children I arrived in Glasgow otherwise I would have been in Oxford.

INT: And the Rabbi you mentioned just took it upon himself to rescue these children?

M: Well, I mean some people paid for the transport, some children had absolutely nobody and they didn’t. As far as I’m aware my mother paid for me in Poland and my aunt paid for me in Britain so that some other child who had nobody could come you know. A lot of children went some orphanages or hostels that he ran but my aunt came to London and took me straight off the transport.

INT: And so you stayed with her? Did you, is that where you lived?

M: So well I knew no English, I knew Russian and Polish very well but no, no English. So I came to Glasgow and stayed with her and she sent me to Laurel Bank, because she worked at the University. She lived in Byers Road renting two rooms from a landlady and so the school was just up the road, which was very convenient, and the school was very good to me because I really could not speak a word of English. 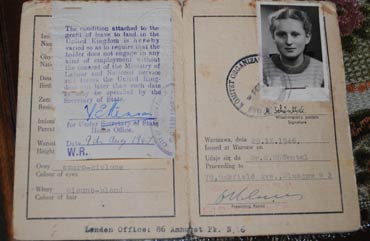