Marion describes her new life in Glasgow after the end of the war. She learned English and attended Laurel Bank School

INT: And they [the school] gave you special support did they at the time?

MC: And they were very kind and very good so that after three years at school, well I arrived in November in 15, I ….on 14th of January I was 15 and I left school when I was 18 and a half so in that time I managed to get all my Highers.

MC: Well the most amazing part is that my school friends, with whom I still keep in touch, some of them have not forgiven me to this day.

MC: Because when it, well you were not given at that time and you know you had to take you Highers all in one lot. You couldn’t take two subjects here, three subjects there, you had to do it in the one lot and you weren’t told what marks you had. The only thing was that the headmistress Miss Glover would ask the inspector who came top, so she could award a prize, and when it came to English I got the prize.

MC: Which was terrible after three years in this country.

INT: But it shows how determined you were as well, I think, to learn

MC: Well I was always a voracious reader so I always always read an awful lot, and I think this was it and I was a very naughty girl because during break when you were supposed to be outside in the fresh air, mostly it was cold and wet, so I hated it. I sneaked into the library and I read and funnily enough a lot of the books that I read obviously nobody else ever took them out because they were always there for me to read whenever I came.

MC: No we spoke Polish but very fortunately because she had spent time in Paris she knew French as well, and eh so I took English, I took French, I took Chemistry, Physics,

Mathematics and History and the most difficult subject of all was Arithmetic, because of course, I was used to the decimal system and the British system of weights and measures and coins was just dreadful.

MC: Was very good at Geometry, Algebra, Trigonometry, no trouble, but Pence you know Ha’pennies, Farthings and Shillings, oh that was so difficult.

INT: And your mother by that time was over.

MC: My mother had remained in Poland…

MC: …because she had remarried that’s why she was called Sabina Hammer because her second husband was Isaac Hammer but in 1951 my mother had always wanted to go to Israel, always, and she married, we came back to Poland. We were repatriated in May of 1946, after many many vicissitudes. My step-father became Director of a Polish orphanage, and my mother by that time was with him, and out of the horrible orphanage that it used to be, my step-father made really something that people used to come and admire because there was such a change. He completely transformed it, with my mother’s help I must say, the power behind the throne! My mother was really, very very good about telling him what he should do. She was quite a remarkable person she really was and eh. So we were repatriated in actually, passenger trains this time, not cattle trucks, back to Poland in May of 46.

And of course, the shock of coming back and finding that the whole family has perished, and the Communist government had nationalised everything; nationalised the factories, distributed the land that was my grandfather’s among the peasants. And the danger was that if we showed our face in the town where my grandfather lived, we would be murdered, because the peasants would say ‘oh these Jews have come to reclaim their property, right’.

Because 26 Jews were killed not far away from there, in July of 46, it was known as the “Kielce Pogrom” They had survived the war, came back and the Poles killed them. So my mother, it was really that that decided my mother to send me to Britain to my aunt. Meantime, you know I was sent to school in September.

I went to school in Krakow but only for a couple of months because then in November, that was that, I was sent over here. It was quite traumatic because I was very attached to my mother, and I hadn’t seen my aunt since I was six years old and of course for my aunt to be saddled with a teenager was not easy.

MC: 1950/51 Stalin unleashed an anti-Semitic campaign; you know there was the Doctors’ so called plot and so on. It got worse and worse being Jewish and Poland was totally under Russian domination, completely. And it was difficult even to get away to Israel, it wasn’t easy at all, but my mother was determined to emigrate and he [my stepfather] didn’t, so they got divorced.

I remember being quite upset about it because he was a very nice man, but she got divorced and at that time when you were leaving Poland, they literally counted how many pairs of knickers, how many blouses, how many skirts. You were so restricted as to what you were able to take away, it was quite ridiculous I mean your personal clothes and things, it was dreadful. So she arrived in Israel by boat.

INT: And and you were already in in Scotland by this time?

MC: Well yes it was, I think February ’51 I was already in my medical studies doing my, well I left school 1950 so I, I was at university when we celebrated the quincentenary which was lovely. It was a wonderful year to be in ‘cos there were so many celebrations. It was quite fantastic.

So in ’51 in the summer I went with a party of students to Israel [ as her mother was living in Israel by that time.] And I hadn’t seen my mother since 1948 because in 1948 I went back to Poland on holiday, still on a Polish passport.

MC: There was at that time a Polish consulate in Glasgow and, I went with a friend and she was a charming lady, also from Poland and she persuaded the Consul to give me an allez-retour visa so that I wouldn’t need to try and get a visa to return, I had it already in my Polish passport. So I spent too long in Poland. I went by ship from Southampton to Gdynia which was quite an adventure for a 16 year old. 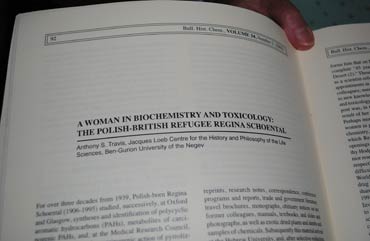