Marion’s story begins in Poland in 1932 when she was born into a wealthy family in Krakow. As a child during the Second World War she fled the fighting by travelling into Soviet Russia and eventually to Siberia, Kazakhstan and Uzbekistan. In 1946 she joined her aunt in Glasgow where she completed her school education, went to university and finally settled.

INT: So the beginning could you tell me when you were born? Where? And what was your name at birth?

M: My father was a lawyer and I was an only child. They never had any more children because my father was in the next room when I was being born and he said to my mother I’ll never put you through that again.

M: Anyway, so yes I was an only child and I was an only grandchild, so I’m told that until the age of seven and a half I was very lucky.

I had a very privileged upbringing as I realise now, of course you don’t realise it at the time.

INT: And what was your name then?

INT: Was it Marion?

unfortunately my mother’s parents were both already dead, they died in their forties, very young. And when he came back, he said he called me Matilda Maria Ludvika and my mother apparently ran a temperature [as she was so annoyed]  but he just wanted to give me these names whether they are family names or what. But when I came to Glasgow and I went to school they said because of Maria, did I want to be called Mary because I was never called Matilda or Ludvika.

It was in Poland when you have a name like Maria you are called Marisza, Marilla, Marina, I mean there are variations of the name and so I was used to being called all sorts of things and I didn’t want any of them. I said I’d like to be called Marion so I [have been] Marion ever since.

My father started Krakow University and because of all the land that my grandfather had; you know there wasn’t just land it was a mill, it was a brick factory, there were, you know there were byres full of cows and there were horses. I mean my father rode horses and so on. So he started studying agriculture but then he couldn’t stand exams. Exams were too much so after a year of agriculture he started something else.

So, he was studying law when my mother’s younger brother started law, and because the parents were dead my mother took a flat in Krakow in order to keep house for her brother, of course with a cook and a maid. And that’s how she met my father because my uncle brought him home, but when my father wanted to ask her out she said: ‘Oh you are far too young for me, no no, no.’ And he said ‘I’m not as young as you think because this is the third faculty I’m in.

M: I’ve already done this and this’. He would have never finished law if it wasn’t for my mother because he hated exams. He just couldn’t stand exams.

INT: I was going to ask at home, in before you came over, did you speak Polish at home and learnt Russian at school or..?

M: Well at home until 1939, we only spoke Polish at home but I had a governess, well my mother was in a very fortunate position,

there was a cook, there was a maid and for me a governess and the stipulation for the governess was that she had to know Hebrew because I learnt Hebrew before I went to school. In Poland, you go to school when you’re seven, well I was not quite seven because September you started school and I was seven in January.

I was only one year at school in Poland and it was a Jewish school, a little private school just three or four classes. But I had a governess who taught me Hebrew so that I could read and write Hebrew and I learned little Hebrew songs about aviron [ aeroplanes] and eh you know all sorts of little Hebrew words, and of course all the bible stories. And for all the Yomtovim [festivals], we always went to my grandparents, my father’s parents because my mother’s parents were long gone, and yes, so that I was you know very familiar with all this but it was only Polish we spoke at home.

M: I only learned Russian when we were taken to Siberia. I was three years in the first class. 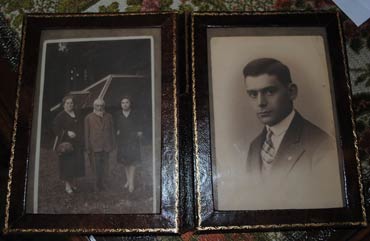 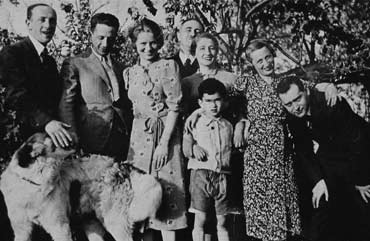