Marion tells of the importance of remembering her roots and her Polish family, but she feels that her Scottish children and grandchildren have given her enormous joy.

This section of the interview was carried out in February 2014.

INT: Right, so one of the things we always do on reflection is ask about the nice things and, although Marion, you’ve talked quite a lot about how horrendous it was about losing your parents and…

INT: …your father, oh sorry your father, and how wonderful it was that your mother lived.

INT: And you married very happily, but you haven’t really talked very much about your family. So do you want to tell us a wee bit about…

MC: Well I had two children very young, when I was 21 and 23, and then we moved house. We moved from a very, very big house in Bridgeton, which had always been a doctor’s house, to a very nice bungalow in Pollockshields with a lovely big garden. And I was very fond of gardening, so was Henry but he didn’t have much time, so really I cut the grass and I pruned the roses and I did all that. We always bought nice plants when we went anywhere so we really had some beautiful plants in the garden. And I wanted another baby, in this lovely [house so as to put] the pram out into this lovely garden. And Henry said “No, no, no, we’re not having any more, absolutely not”. And then Nina finished school and she was going to Norland’s College to be a Norland’s Nanny.

She was very fond of children but they wouldn’t take her until she was 18 and she was only 17, so I sent her to be an Au Pair in Paris, because I had friends in Paris. And she was there for 7 or 8 months and came back speaking perfect French.

MC: [She] did very, very well, yes. Peter was at school, he was 15, he was very busy with his friends with sport and so on. And so I went to Langside College to do a secretarial course and thought I could maybe do that sort of on and off to fit in with my life. And I was doing very well with shorthand typing, accountancy, everything and then I began to feel very unwell and I couldn’t bear the smell of the dining room. And I got thinner and thinner and it turned out I was pregnant.

MC: And that’s when I had Alice. I had to give up my studies because my blood pressure dropped down, I just was sick three times a day, not just morning sickness. Obviously girls don’t agree with me, I was sick with Nina as well, I was fine with Peter.

MC: And with Alice I was really, really bad, well I was 38. And she was born at the end of July when I was 39 in ‘71 and of course she was a wonderful baby and I was walking on air. I thought it was the best thing I had ever done.

INT: And do you not find with your third you’re much more relaxed about it all?

MC: Oh but she was a lovely, lovely child, an absolute blessing. Of course my mother came from Israel to help me and my mother was wonderful, she really was wonderful. And so that was the end of my studies as a secretary but it did help me to do the books for Henry so that I was able to do that. And of course Alice has been an absolute blessing because she did very well at school; she did very well at University.

INT: So what did she study at University?

MC: I wanted her to study Pharmacy but she had excellent Highers, she could have applied for anything, but no, accountancy. And when it came to the graduation, it was on a Saturday and by this time she had become very orthodox and she wouldn’t graduate on a Saturday. Alice went to Manchester to work in an accountant’s office but as she became so very frum [religious] and the Holy Law Synagogue was looking for an administrator to put things on the computer because the people that worked there for years didn’t want to do that. So they took her on and she did very well there. And then my aunt died and left, well, the proceeds of her flat were divided between us all and each child spent the money differently. Nina bought a car…

MC: …and invested the rest. Peter was just having his 40th birthday at the time so he had a marquee, a jazz band…

MC: In the garden, it was a wonderful party yes. And Alice used the money to go to She’arim in Har Nof.

MC: To study Jewish religion. And my goodness she certainly studied that and that’s where she met her husband.

MC: And he came over (from a non orthodox family) and he had finished university, I think in Denver, Colorado where he comes from, and was going to do law. But he went to Israel meantime for a few months and decided to become religious and went to Or Someyach…

MC: …Yeshiva. And that’s how they met.

MC: They live in Edgware now.

INT: And they have four boys?

INT: Lovely. So she has four boys.

MC: So we have four grandchildren from Peter, a boy and three girls.

INT: Oh my goodness, four there as well. And so are they older?

INT: My goodness. And Nina has an interesting job I think as well, doesn’t she?

MC: Well Nina… When she went to France, after she finished, she finished Norland’s and they have to do private nannying to get the Norland’s certificate and she got a job with a family, I think they had a 6 year old girl and a baby. And they had lived in Kensington and they had some estate in the Borders in Scotland. So she thought she would take that job. But by the time she actually came to take the job they had sold up in this country and bought a châteaux in the south of France, in Bar-sur-Loup or Tourettes-sur-Loup which is not far from Grasse and it’s the perfume industry there. So she worked there and of course she made friends with all the staff, because they had staff. They had somebody to cook and a gardener and a housekeeper etc…

MC: Oh absolutely, absolutely. So she worked there for about 9 months and then she came back to Glasgow, got a job in a nursery in Battlefield  which was slightly different, but she decided she wanted to go to Canada. Henry’s two younger brothers lived in Canada, one in Manitoba, one in Ottawa. So she wanted to emigrate to Canada, and having French as well as English, she did the applications and so on and she emigrated. So she lived in Canada for about 8 years. And then she decided to go backpacking around Europe. And then she returned to the south of France to visit and she got this job in the perfume industry, a secretarial job.

MC: She got training, about three months training she got. And she liked it and they were very nice people. It’s a big firm. They don’t do, sort of, retail, it’s all wholesale. It’s all export and wholesale, big quantities of all the things that they use in the perfume industry. So she’s been working there now for over 20 years.

MC: Oh it’s a beautiful place, the whole thing looks like a film set, it really is lovely.

INT: But she has lovely nephews and nieces.

MC: Oh yes she’s very fond of them, she always comes to see them.

INT: So, and if you look back Marion and if you think about where you started as a child.

INT: And now you’re living in Glasgow, you have…

MC: Yes. Well, if Hitler had his way there would be nothing, so we were very lucky that they took us to Siberia. Yes.

INT: I know. But I think your life has been absolutely fantastic and it’s been a real privilege to interview you. Thank you very much Marion.

MC: Thank you Angela, thank you very much. 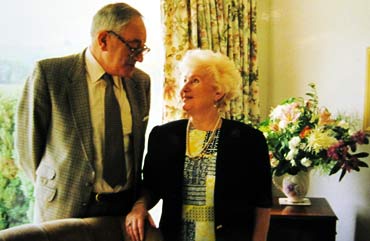