Int: When you came to Scotland, how old were you then?

Susan: It was because I had a great-uncle and a great-aunt in Scotland. I don’t know if you know Mrs Kubie?

Int : So who was your great-aunt and uncle?

Susan: Dr and Mrs Banyai. They lived in Ayr at the time and I discovered meanwhile that I had my cousin to whom I gave my papers; I was Chairman or Vice Chairman of HaNoa HaTsioni (a Zionist Youth Group).

Susan: Yes, in Hungary. So they sent us some false papers for me and for a number of reasons I didn’t want to go.

Int : False papers so you could emigrate to Palestine as it was then?

Susan: Yes, I suppose so, but it didn’t specify on it of course.

Int : So you chose not to go to Palestine?

Susan: No, if you went illegally then you had to go to Cyprus and I felt nothing on earth would put me behind barbed wires again so again I was too young and I was too naive and there was a regiment called the Jewish Brigade and I don’t know, some of them came over, they were in Italy at the end of the war, and they came over and took me translating and interpreting and so on, and they thought of the great idea of marrying one of them, one of the Jewish Brigade, but in name only, but as I say I was too young and too naive.

Int : What age were you then?

Susan: 19, but I had lived a very sheltered life in Hungary. Anyway.. 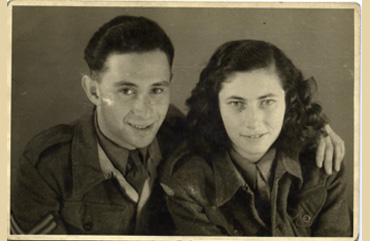